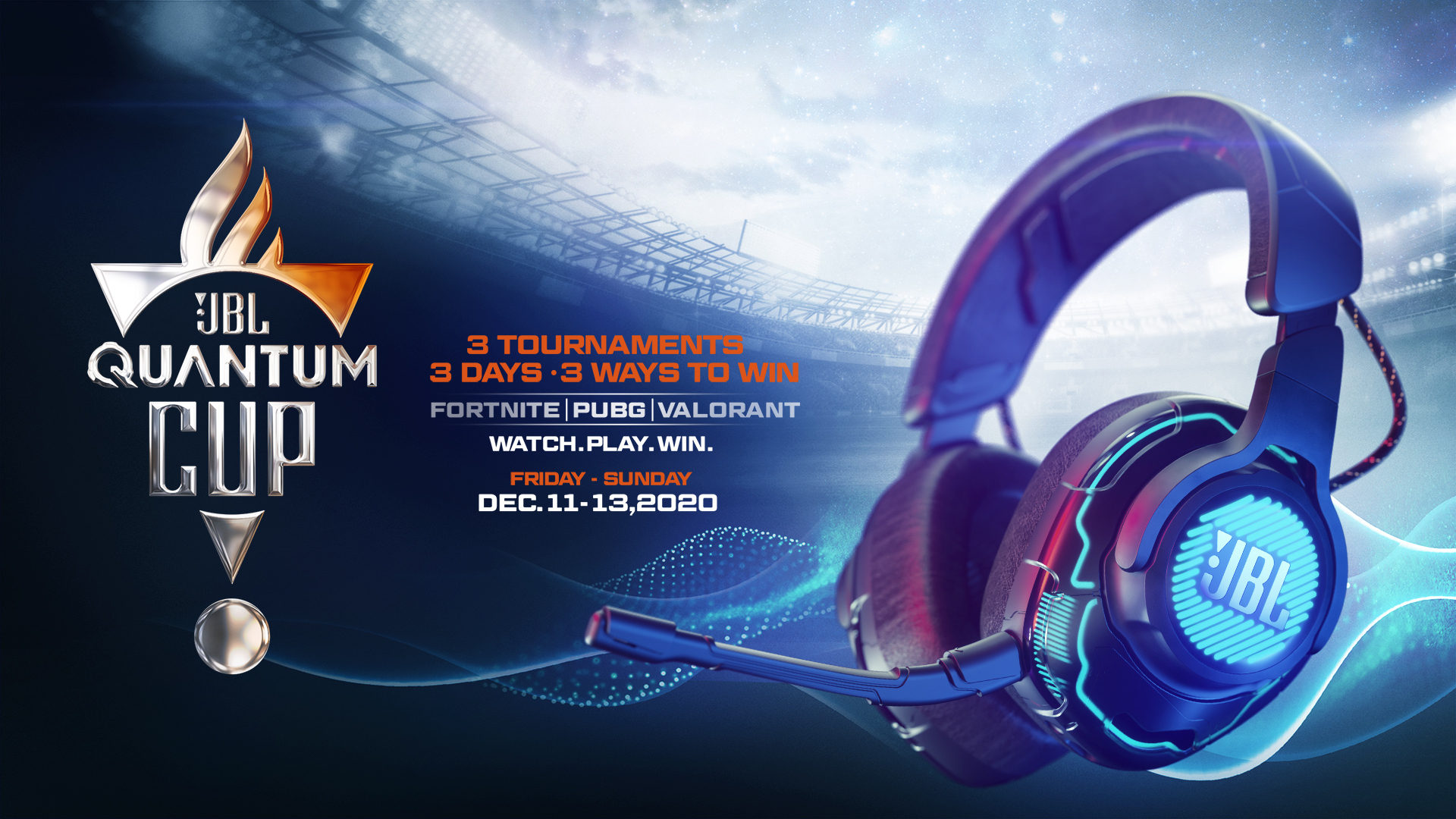 Fans are invited to watch, play and win throughout the three-day competition

STAMFORD, Conn .– (BUSINESS WIRE) –Gamers, it's time to level-up. Today, JBL announced a first-of-its-kind global gaming tournament that puts consumers at the center of the action: The JBL Quantum Cup. JBL has partnered with E, the largest esports organization in the world, to bring to life this cutting-edge experience.

Starting December 11, consumers will be able to watch the top names in esports face off in three of the hottest battle royale and shooter games: Fortnite, Valorant and PlayerUnknown's Battlegrounds (PUBG). Unique from other esports competitions, consumers can compete during qualifying rounds of the global Fortnite challenge for a chance to advance to the finals of the JBL Quantum Cup and play against the pros. And that isn't the only way consumers can win during the tournament. While fans watch the world's best streamers go head-to-head, they will have the opportunity to win multiple prizes to enhance their at-home gaming set up. There has never been a better time to be a fan or a player, or both! The three-day JBL Quantum Cup event will bring together gamers from across the world, all vying for the championship title.

Spanning three continents - North America, Europe and Asia - the JBL Quantum Cup will create a unique global gaming event, featuring a stacked roster of streamers and shoutcasters. As the official global gaming headset partner of premium lifestyle brand and gaming organization 100 Thieves, viewers can catch 100 Thieves' Valuing and Fortnite teams competing using their favorite JBL Quantum headsets for a shot at the $ 200,000 prize pool and the honor of being crowned a JBL Quantum Cup Champion. There will also be in-stream appearances by regional JBL Quantum Ambassadors Ali “SypherPK” Hassan and Jay “Sinatraa” Won.

"Knowing how important sound is for competitive gaming, our teams are extremely excited to partner with JBL and participate in the first-ever JBL Quantum Cup to show the top names in esports how much of an edge the JBL Quantum headsets give us in competition, ”Said Matthew“ Nadeshot ”Haag, 100 Thieves Founder and CEO. “We're looking forward to playing alongside our fans during the stream and showing the strength of our Valuing team - led by Hiko - as well as our successful Fortnite teams. "

For consumers looking for even more action, the JBL Quantum Cup will stream on the following platforms:

Additional details surrounding the JBL Quantum Cup and timing for the Finals can be found at https://esl.gg/jblquantumcup.

For the ultimate competitors looking to show their skills on the global gaming stage, the JBL Quantum Cup invites 1,200 consumers across the globe to participate in the global Fortnite tournament, with regional qualifiers kicking off on December 5. As one of the most popular titles in gaming today, the global Fortnite challenge will be broken into regional qualifying rounds in North America, Europe and Asia. This first-of-its-kind consumer regional qualifier will include three rounds of competition, with the top 10 duos in each region advancing to the regional finals to battle with the best professional teams and influencers. Interested consumers can register at https://esl.gg/jblquantumcup now through November 30.

"Esports is growing faster than anyone expected, so being able to unite pro streamers with fans for the first time ever in this unique three-day tournament is a huge moment for us," said Ralph Santana, Executive Vice President and Chief Marketing Officer at HARMAN. "With billions of people regularly tuning in to simply watch gaming tournaments, JBL is changing the game with the first competition that puts viewers at the center of the action."

JBL creates the amazing sound that shapes life's most epic moments. From iconic events like Woodstock and concerts at Madison Square Garden, to games at Yankee Stadium and weekend road trips, JBL elevates listeners' experiences with award-winning audio that lets them make the most of every moment. Used by some of the world's greatest musicians and elite athletes in basketball, baseball and esports, JBL has unmatched professional credentials and over 70 years of delivering industry leading innovation. JBL is the authority in engineering superior sound.

HARMAN International (harman.com), a wholly-owned subsidiary of Samsung Electronics Co, LTD., designs and engineers connected products and solutions for automakers, consumers, and enterprises worldwide, including connected car systems, audio and visual products, enterprise automation solutions; and services supporting the Internet of Things. With leading brands including AKG®, Harman Kardon®, Infinity®, JBL®, Lexicon®, Mark Levinson® and Revel®, HARMAN is admired by audiophiles, musicians and the entertainment venues where they perform around the world. More than 25 million automobiles on the road today are equipped with HARMAN audio and connected car systems. Our software services power billions of mobile devices and systems that are connected, integrated and secure across all platforms, from work and home to car and mobile. HARMAN has a workforce of approximately 30,000 people across the Americas, Europe, and Asia.

ESL Gaming is the world's largest esports and gaming lifestyle company. Since 1994, the company has been shaping the industry and leading esports and gaming innovation on a global scale across the most popular video games with numerous online and offline esports competitions, and through premier gaming lifestyle festivals. The company operates high-profile, branded international leagues and tournaments under the ESL Pro Tour, including ESL One, Intel® Extreme Masters, DreamHack Masters, ESL Pro League, and other preeminent, stadium-size tournaments. ESL Gaming also produces and hosts DreamHack Open tournaments, ESL National Championships, grassroots amateur cups, matchmaking systems, and DreamHack's gaming lifestyle festivals - which feature everything gaming under one roof. ESL Gaming is part of MTG, the leading international digital entertainment group. More information is available at about.eslgaming.com.

Wizards of the Coast Brings the King of the Monsters to ...