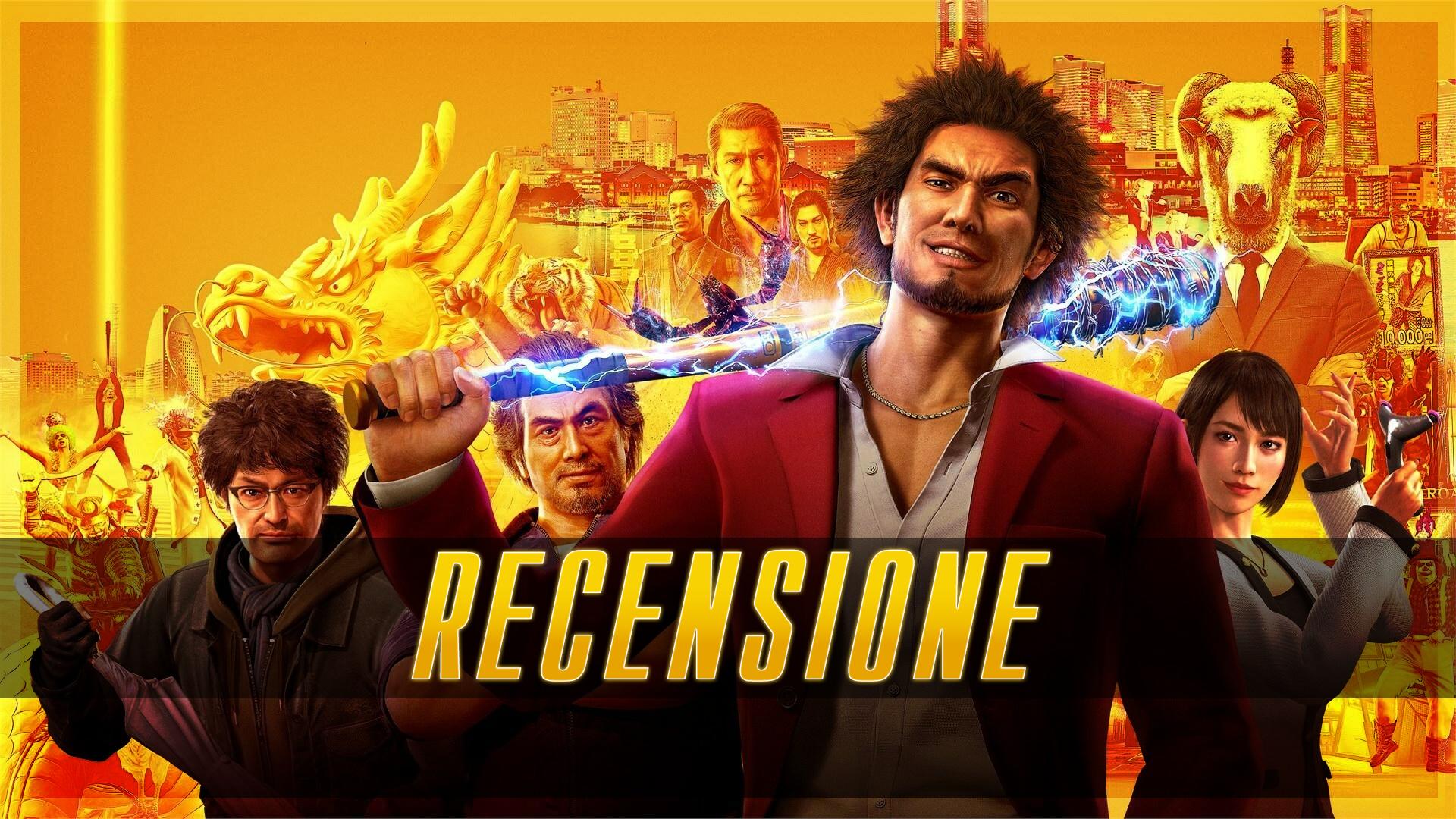 After the story of Kazuma Kiryu, the team directed by Toshiiro Nagoshi realized that the crime saga made in Sega needed a breath of fresh air. Thanks to Yakuza: Like a Dragon comes the brand's JRPG turning point. Good choice or too brave?

Leave the bulky shoes of Kazuma Kiryu, and closed the investigative parenthesis of the spin-off Judgment, it's time to get to know the new protagonist of the saga. Ichiban Kasuga appears from the first moments of the game completely different from the Dragon of Dojima. If the latter represented in toto the Japanese hero often present in the Japanese imagination, the latest addition to the Sega home is a decidedly more outgoing and naive boy. Raised exactly like Kazuma in bustling Kamurocho, Ichiban is a hero of the people. Raised by the manager of a Soap Land and the local "masseuses", the little orphan becomes a Yakuza when he is only sixteen. He grows up fighting for the lowest part of Japanese society, the one that lives in the perennial "gray zone", and this often leads him into unpleasant situations.

The plot of the game starts from one of these episodes. The young protagonist, to protect his patriarch, takes responsibility for an unspoken murder, ending up in prison for 18 long years. Once the sentence is served, the country is no longer what it used to be, the Yakuza is no longer what it once was. Having returned to his former boss, he shoots him in the chest without too many pleasantries. But Ichiban has tough skin and, far from dead, wakes up in the garbage of Yokohama. What's the point of all this? The player has the task of finding out on this journey through the Japanese underworld, and beyond.

Ichiban soon expresses his deep love for the Dragon Quest video game saga by creating one of the most interesting gameplay gimmicks of recent years. The brave change of course from action to turn-based role-playing is contextualized thanks to the protagonist's obsession with the most important JRPG brand in Japan. Ichiban sees each fight as a turn-based encounter, complete with stats, buffs, and debuffs, and this often leads to hilarious scenes. Fights in Yakuza: Like a Dragon begin as soon as you are spotted, creating a sort of "chance encounter" effect. Each key is dedicated to an action and, despite the gender change, timed actions still play a very important role. During the attacks it is in fact possible to inflict extra damage by pressing the button indicated on the screen with the right timing, as if to quote the Heat Actions of the previous titles.

The party characters, as in any self-respecting JRPG, level up and must be properly equipped, so a good dose of farming is necessary (even if the difficulty level is never difficult). It doesn't end here with the references to Dragon Quest: Ichiban and the other protagonists can count on a real Job System, in the literal sense. In fact, in Yokohama there is an employment center to visit to choose a specific job which, as per the role-playing tradition, influences the skills and aesthetics of the characters. This system proves hilarious in contextualizing very normal works in a Jrpg key, and you will find yourself smiling several times in front of crazy scenes.

Abandoned the iconic Kamurocho, the port city of Yokohama is ready to welcome the former Yakuza. The previously mentioned Isezaki Ijincho district is completely different from the Tokyo pleasure district. The district that is home to much of Yakuza: Like a Dragon is at least three times the size of the capital's neighborhood, but it is densely less populated and less bright. The feeling of exploring Yohohama is that of living in an industrial city far from Tokyo's frills and lights, offering players a glimpse of contemporary Japan probably unknown to most.

The Yakuza series has explored several Japanese locations over the years. From the multi-visited Tokyo to the blue coasts of Okinawa, from the snow-covered Hokkaido to the sunny Hiroshima, the saga has always offered memorable glimpses. Also this time the goal was hit in full.

Isezaki Ijincho is full of activities that have made the brand's fortune, such as arcades and karaoke - don't worry, Baka Mitai is there - but it also offers new and successful ones. Between cinema, cultivation of seedlings, drinking with companions, refresher courses and business management, the hours of play flow quickly, balancing the often melancholy rhythm of the main story. Yakuza: Like a Dragon offers a truly mammoth amount of content, going beyond even the huge chapter 0.

However, this content care has a price: the technical sector not exactly at the forefront, at least on PS4. If the faces and facial animations, as well as the general lighting and direction are traditionally on very high levels, it is not possible to say the same regarding the insistent recycling of assets, low definition polygonal models of clothes and objects. background, and not-so-immediate uploads. However, these are minor flaws since, despite the release also on next gen consoles, this seventh chapter has been available in Japan for a year now.

Transform from Koi to Dragon

Tattoos play a very important role within the Japanese criminal ecosystem, and each main character of the saga belonging to that world carries a symbol linked to its characterization on the skin. If Kiryu could sport an ascending dragon on his back, symbol of his strength and determination, Ichiban has on his back a Ryūgyo, the dragon carpAccording to the legend, the Koi carp that climbs the waterfall to cross the dragon door is rewarded by the gods for their tenacity and determination with a new form, that of the dragon.

This tattoo is perfect for the new protagonist who, just like the dragon carp, is climbing a river of difficulty to greatness, but has not yet completed his growth path. A character therefore deliberately immature and still far from being a majestic Dragon, but with whom it is easier to empathize.

If in Japan this new chapter was simply called Yakuza 7, in the West we tried a different path. The title has no numbering, simply reporting the literal translation of the Japanese title. Ryū ga Gotoku, the brand's original title, translates to “Like a dragon”, without any reference to the term Yakuza. Now, thanks to a new protagonist and new gameplay, this title is more suitable than ever to mark a new beginning for a brand that has only recently achieved deserved fame in the West as well. Yakuza: Like a Dragon is the umpteenth test of courage by Toshihiro Nagoshi, a courage that rewards bringing new lifeblood to a series that risked fossilizing around a formula that was too well-established and characters that were too bulky.

The hero of tomorrow

The Jrpg turning point sacrifices the epicness of beat 'em up clashes in favor of a more complex and studied system, giving us the best-written plot within the saga, characters that are never spooky and a number of out-of-scale contents. 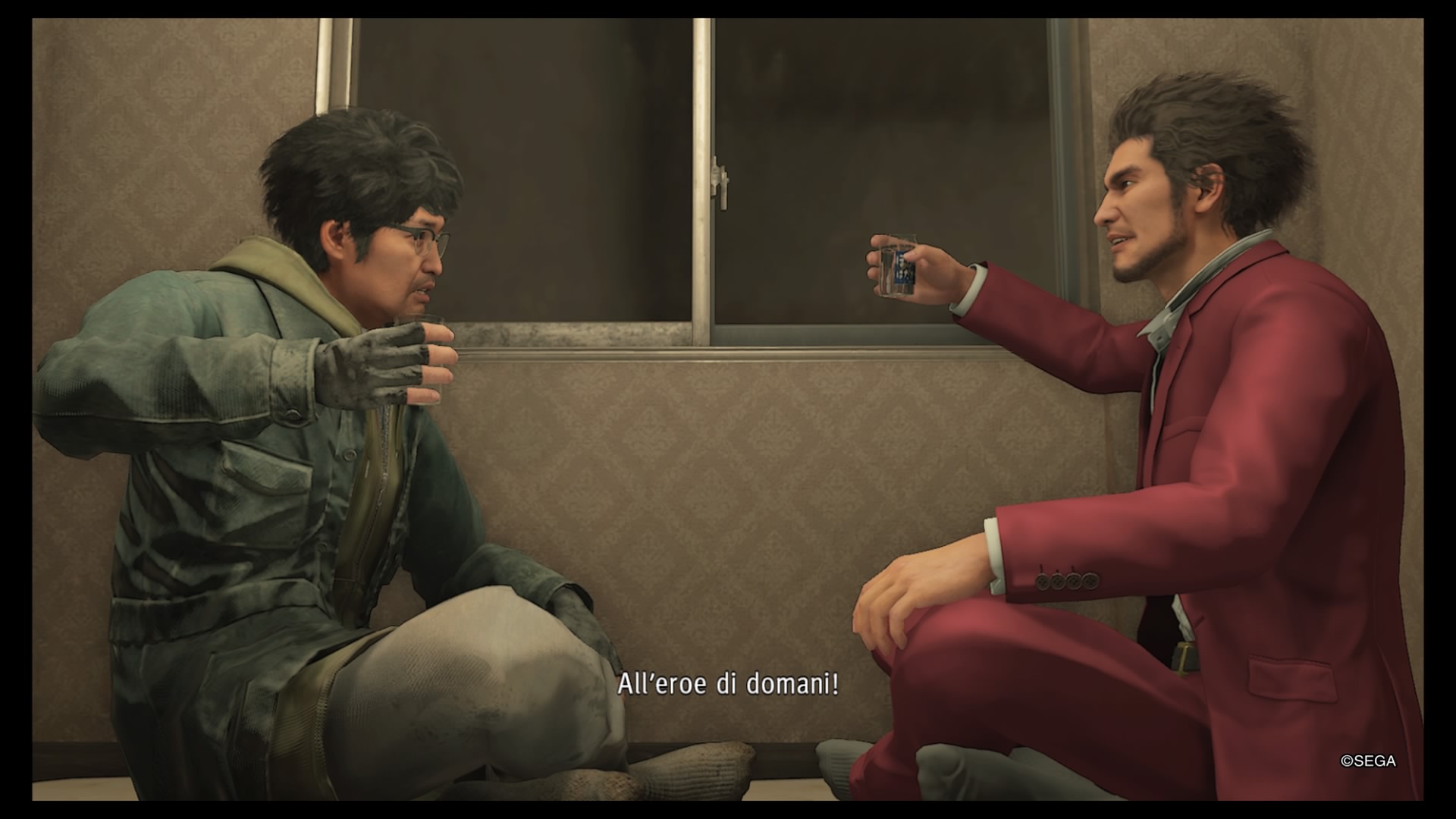 Ultimately Yakuza: Like a Dragon is a beautiful chapter for historical fans, but it is above all the perfect point of entry into the brand for all those who, for one reason or another, have never managed to get close to it. Now, thanks also to the presence of the much requested Italian subtitles, there are really no more excuses. 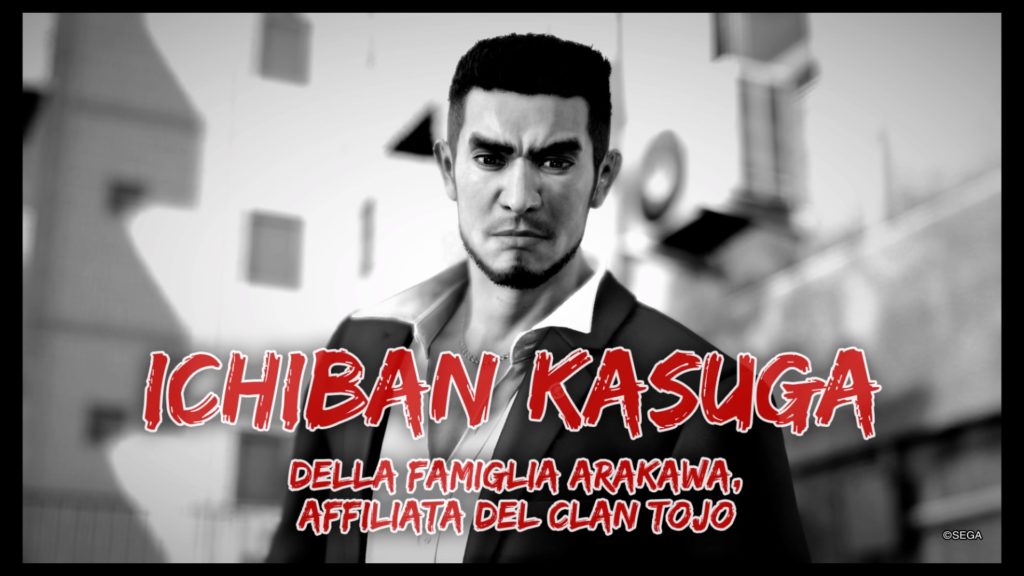 Ichiban and Kazuma share one thing: dubious taste in dressing 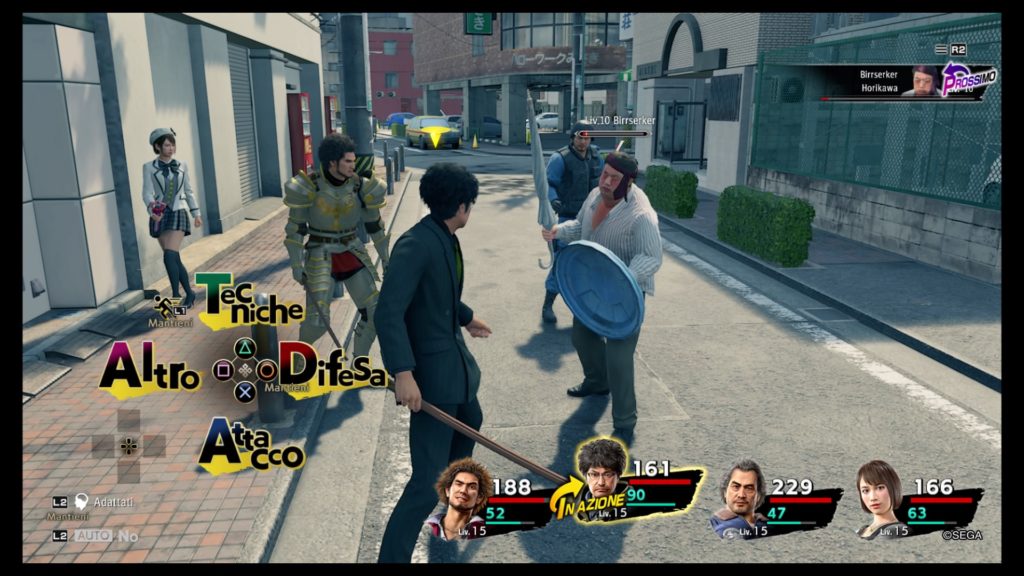 The positioning of the characters is very important during the fights 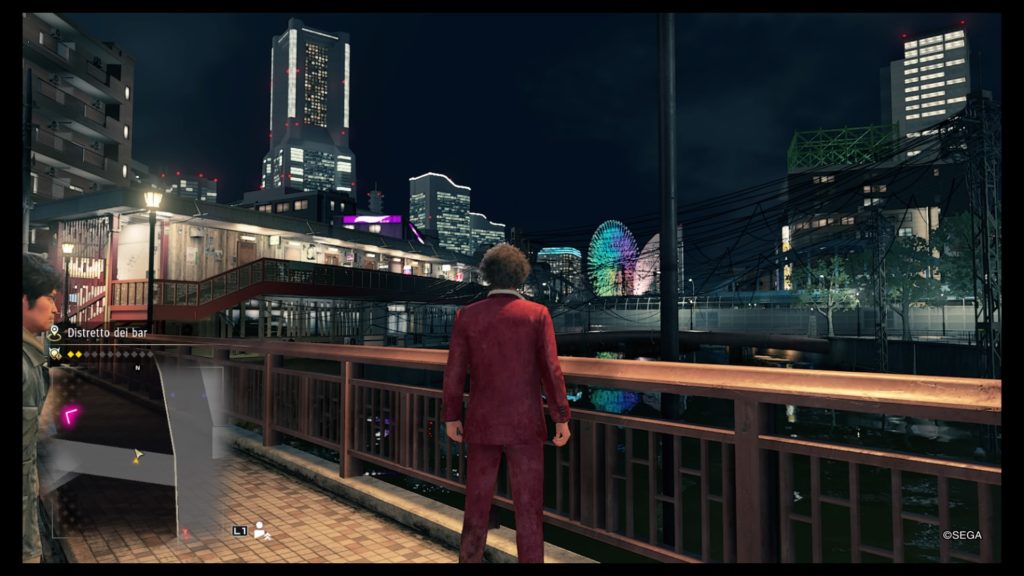 Note in the distance the Cosmo Clock 21, the famous Ferris wheel symbol of the city 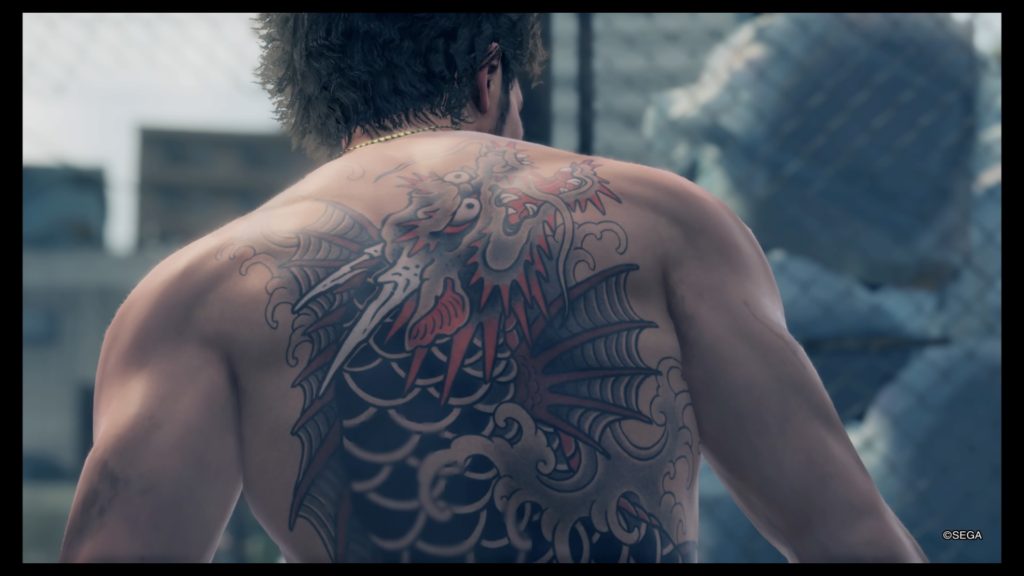 This, like all the other tattoos in the saga, is the work of the Japanese tattoo artist Horitomo who has been collaborating with Sega for years 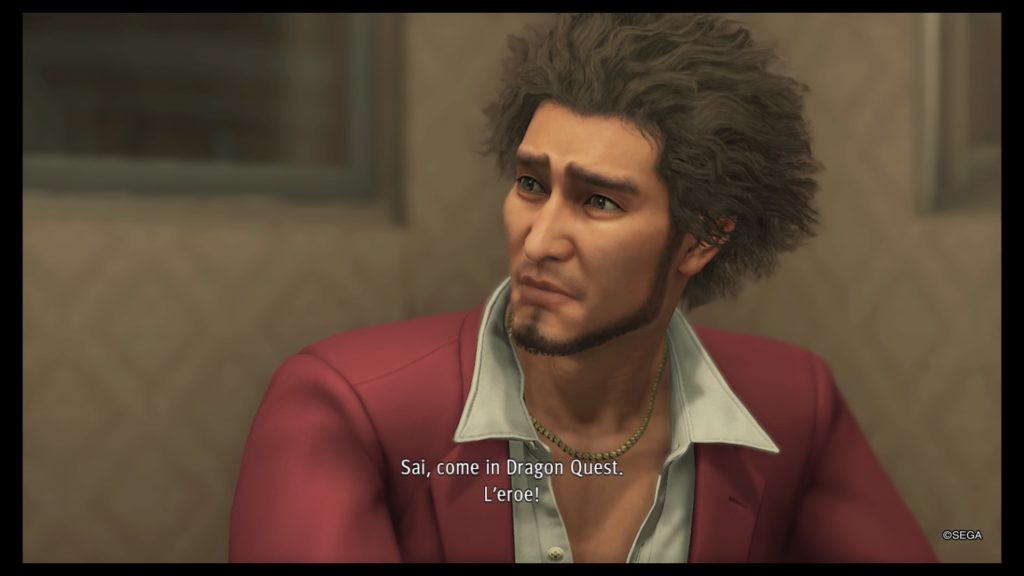 Dragon Quest will be mentioned over and over again 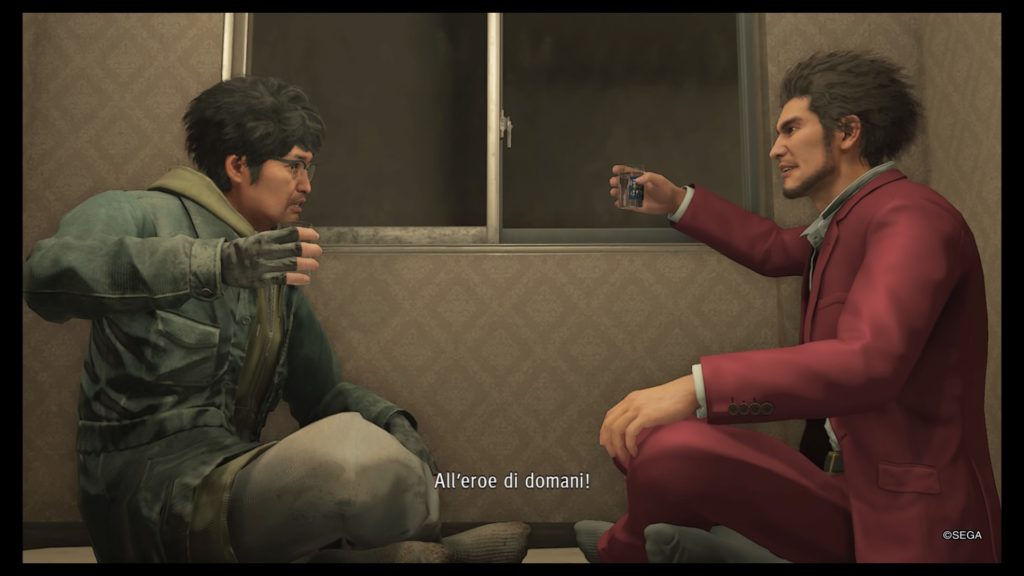