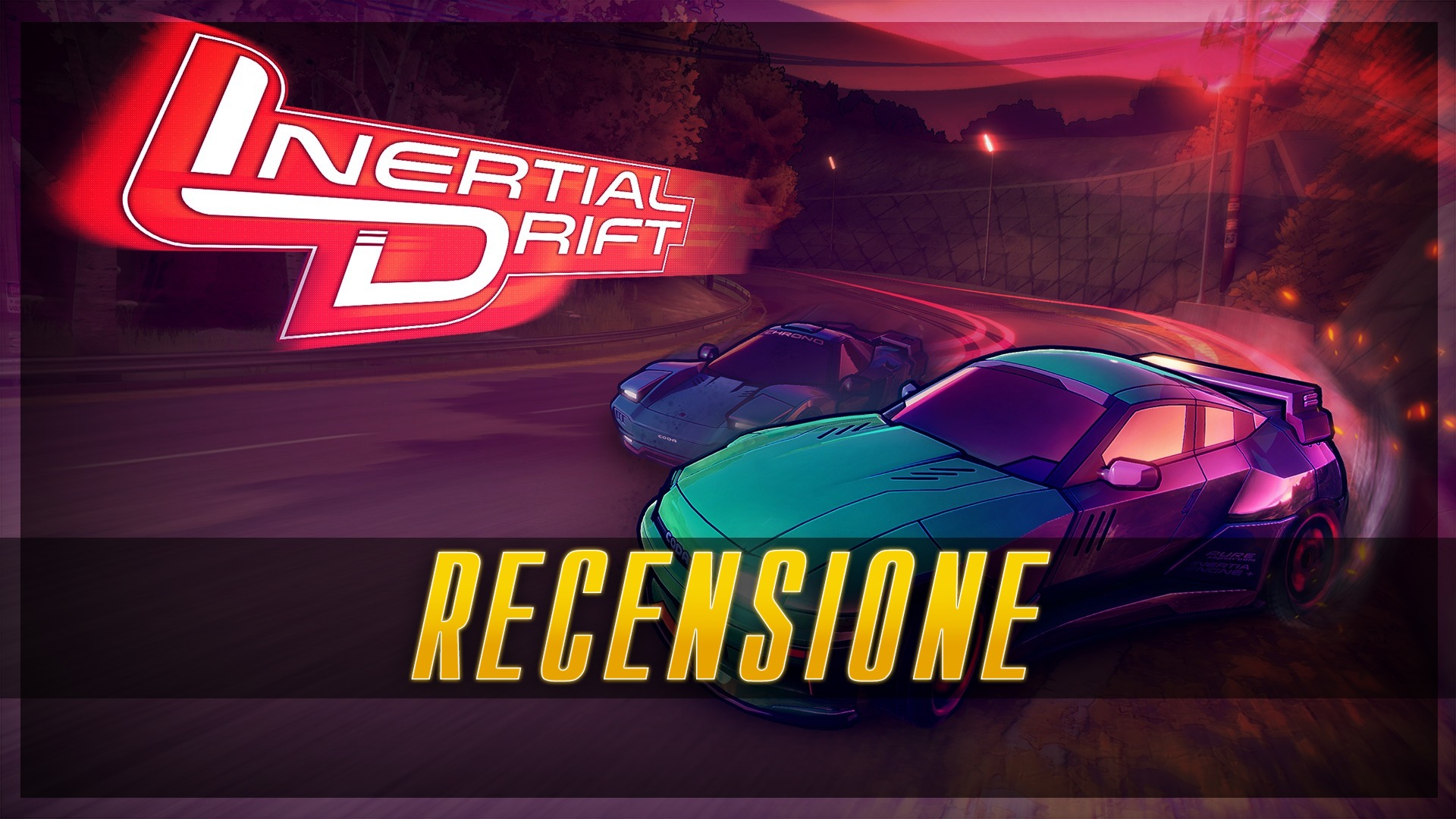 Here we are: the last corner. So far the circuit has been mild, no corners too tight or too wide. The only problem is the snow on the track, the slightest contact could break down the vehicle and be fatal. But I don't care, I'm moving at full throttle and I'm ready to perform the perfect drift to finish the race and win the competition. I place my arm towards the handbrake when, in the distance, I find myself face to face with the emissary of defeat: a baby ram. I change lane to avoid it and I try to save what can be saved, but now the omelet is done: the vehicle swerves violently against the guard rail, compromising the entire race. I'll have to settle for second place. Curses and profanities follow at the end of the race.

This is a very brief summary of my experience with Inertial Drift, arcade racing title developed by the Irish Level 91 Entertainment and that seeks to revive a style of play that in recent years has been relegated - in a sort of exile - to the mobile market. What at first may seem like the usual shovelware that tries to achieve notoriety by mimicking more noble names - in this case the Shuichi Shigeno's Initial D manga - manages in a few moments to show his heart and soul, albeit with some long tamponade the street. But let's go step by step.

A trip among free spirits

Despite not needing it, Inertial Drift follows the stories of four boys: Edward, Ada, Ibba and Viv. During an evening of hot tires and cappuccino, the group decides to embark on a training trip in view of the Summer Grand Prix: the annual tournament that will decide the new King of Drifting. During this long tour of the locations that host the competition - starting from the suburbs, up to a large metropolis or a snow-capped mountain - the boys improve their driving skills, forming friendships, rivalries, disagreements and relationships of trust. Needless to say, the story mode of Inertial Drift acts as a huge tutorial that allows the player to become familiar with the controls and the various types of races. Furthermore, the four characters represent as many driving styles and difficulty levels.

If Edward and Ada adopt a much more sedate and easy to master driving style, with vehicles with balanced statistics both during a straight and a curve, Ibba and Viv are the characters used by more experienced players and with cars with great initial acceleration, but with a reduced drift angle and that tests the reflexes and decision-making skills of the bravest. Furthermore, by completing the challenges proposed by the game it is possible to unlock the rivals and secondary characters encountered during the narration. And since each character uses a different machine with custom settings, having 16 racing cars with as many approaches to the tracks is more than enough to keep anyone attached to the gamepad for a few hours. 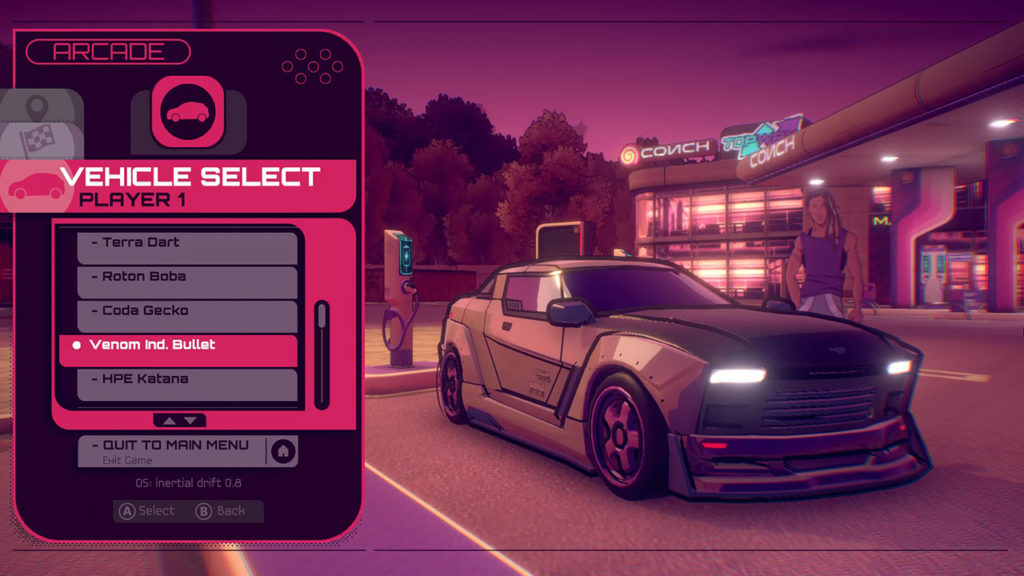 Going back to the narrative of Inertial Drift, the way the story is told is rejected, with no right of reply. Using a Visual Novel-style model, with static characters - despite the few animation frames - and hundreds of lines of text, breaks the rhythm between one run and another. Of course, these cutscenes are skiable and throwing mud on the writing work done seems unfair, however since we are talking about an arcade title the developers could not only have offered the possibility not to include them through the game options, but also to experiment with various directorial choices to tell their own story. Because let's be clear: talking about the performance of a rival car without having seen it is equivalent to buying a phone not displayed in the window.

Speaking of the positives of Inertial Drift, its gameplay is obviously the best done element of the entire production. What differentiates the production of Level 91 from other drift-themed titles is his peculiar control system. Once the acceleration and braking phase has been filed (which uses the classic gamepad triggers), the rest is all entrusted to the analog sticks: with the left stick you steer, with the right one you change the angle of the drift. This allows the player to make precise and fluid movements, depending on the skill of the latter. 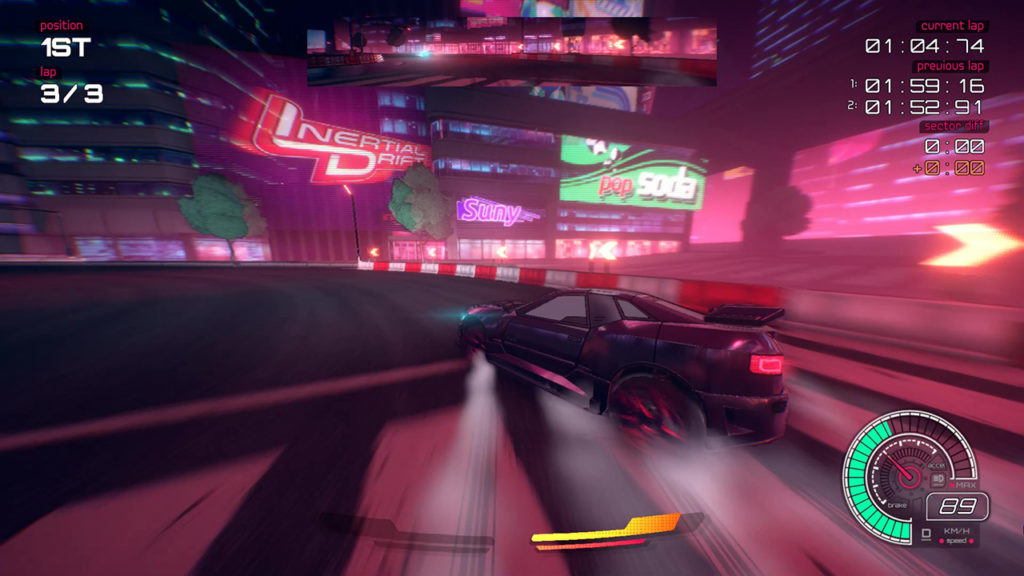 As for the types of races, it is possible to switch between the classic "race", "time attack" and "practice" modes - the latter essential for learning every corner of the four circuits and to get the best times - up to options a little more specific like “style competitions” and “duel”. If the first is essentially the usual points race, the second takes its example from the Need for Speed: Carbon canyons, proposing a race where the distance between first and second is fundamental. Speaking of the available game modes, we have the aforementioned "story mode", a classic "arcade mode", the "challenge mode" and finally the "grand prix". Although at first glance they may seem few, these game options offer several options for completeness, between gold medals to be conquered and extreme difficulties for "the real tough". We are not talking about hundreds of hours of gameplay of course - and for some this type of flow might seem repetitive and tedious - but it is enough to satisfy the "KANSEI DORIFTO" fanatics. The appeal does not lack the usual multiplayer modes, divided into "splitscreen" and "online". Oddly, there is no mode related to the tuning and testing of the available cars, which would have given Inertial Drift even more longevity for the fanatics of manic perfectionism.

From an aesthetic and performance point of view, the title is a roller coaster of ups and downs. Graphically, even on the Nintendo Switch - the version under consideration today - it's not evil. Each scenario has its own personality and recognizable style, while the vehicles are well modeled. However, on the Nintendo hybrid, this aesthetic comes at a price: fluidity. The game in fact oscillates around 30 frames per second, not exactly ideal for a racing game but unfortunately these are the limits of the platform. The problem comes when the player restarts the same game multiple times. In a sort of “Reverse Supersgommate”, Inertial Drift takes into account the braking of the racing cars and keeps the particles loaded even after an immediate restart, affecting the frame rate and forcing a return to the main menu. A negligence in optimization that could alienate many. 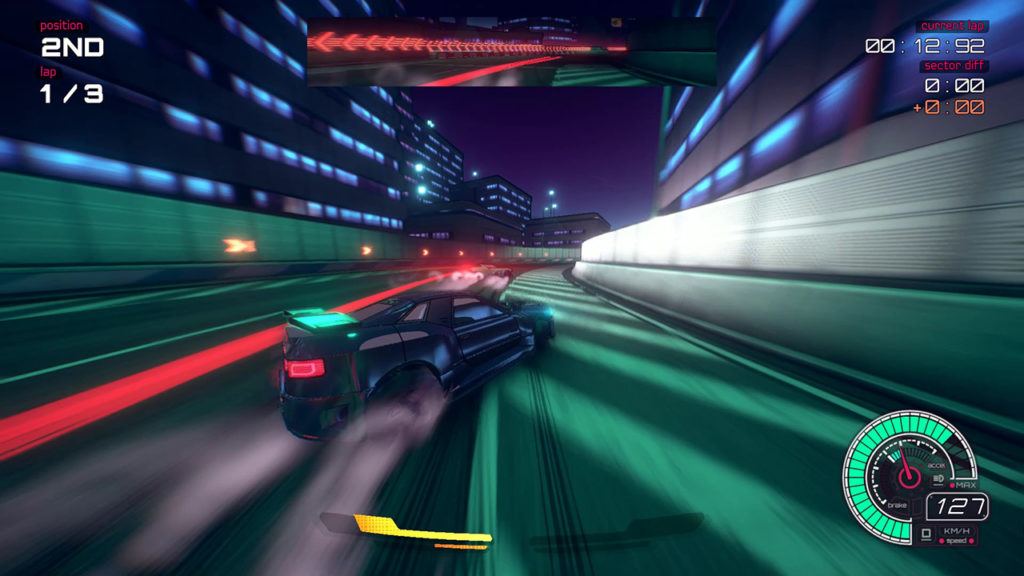 Definitely, Inertial Drift is a good arcade racing game that offers an adequate level of challenge and of completism and that rewards players ready to make a pact with the devil to learn the tricks and secrets of drifting. But if you have other platforms available besides Nintendo Switch, opt for buying on those. The Switch version is passable and valid for portable gaming that characterizes the hybrid console, but some flaws in the optimization phase penalize it heavily.

Gian Luca Cama - January 17 2021
The developers of STALKER 2 commented on the in-engine trailer released several weeks ago, adding some really interesting details that could make the idea ...
Cinema

Di Sarno Raffaele - January 16 2021
In the past few hours Entertainment Weekly has released the first official images of the Mortal Kombat live-action film, due out on April 12 in ...