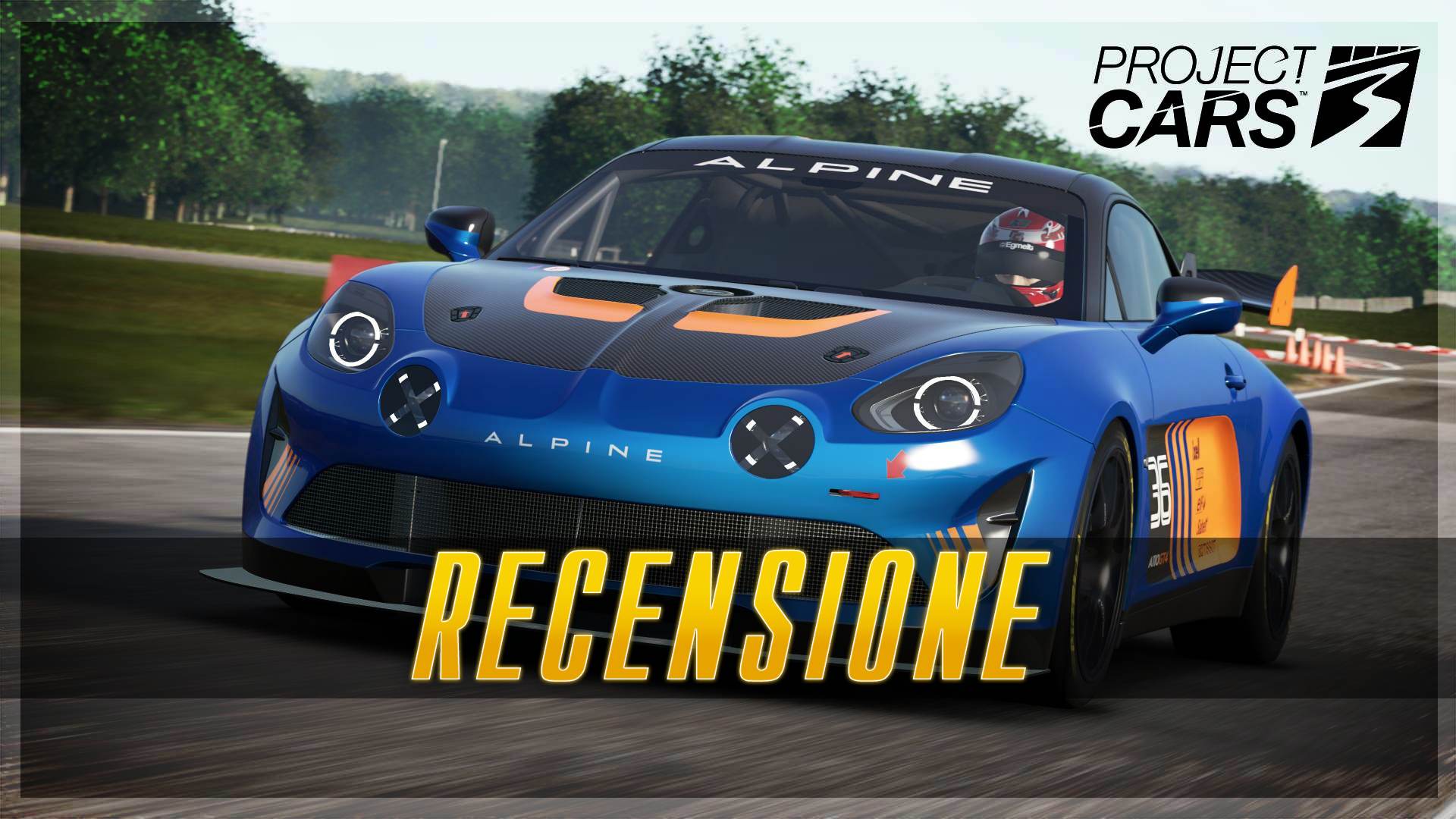 Home News PlayStation 4 Project CARS 3 - Review
Share
Facebook
Twitter
Google+
Pinterest
WhatsApp
Having to deal with the review of Project CARS 3 it put me in trouble, because the first evaluation parameter of the title is difficult to deal with: what kind of game is it? Given that it's not at the extremes of a realistic simulation or a pure arcade, placing it in this imaginary axis that defines the genre of driving games is not trivial. An arcade with a driving model that leans towards simulation? A simulation that winks and grants a lot to a more immediate and simple gameplay to learn and acquire? The answer to these two questions can be "yes" to both but at the same time "no". 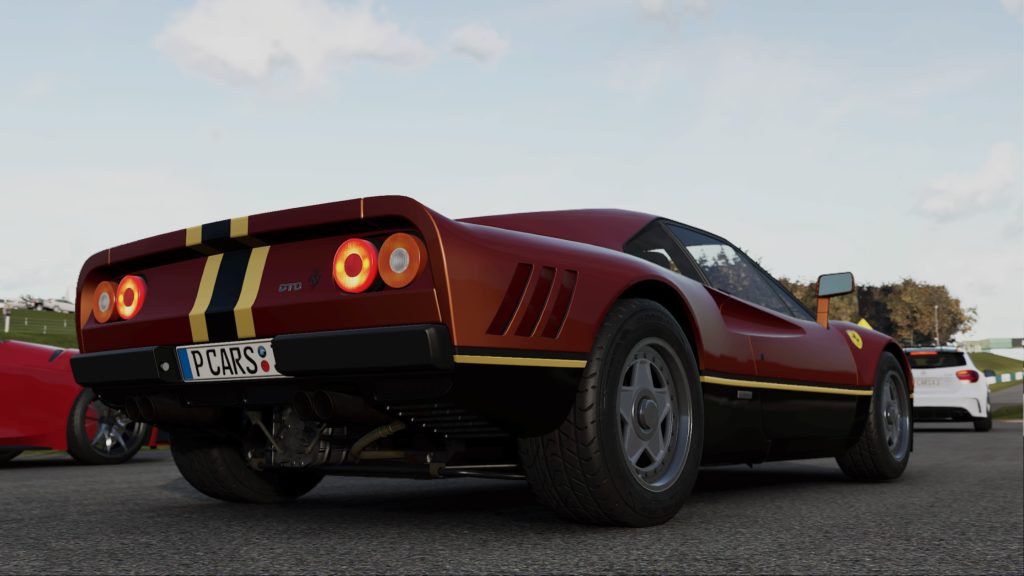 The elements that characterize the gameplay sometimes seem to be in contradiction with each other. For example: if you leave the track with all four wheels and you get a position advantage, you are penalized with a forced slowdown of a few seconds. But there is no penalty if you crash into your opponents at the corner entry, gaining dozens of positions for the late braking.
Power oversteer when cornering leading to a spin? Very well, but then why allow an agile recovery immediately afterwards with a minimum counter-steering, even by deactivating all the aids on stability and traction control? One remains a bit perplexed about physics of Project CARS 3, which gives clues in one direction to take back soon after. It seems to want to be a "difficult but not too difficult" game and this can leave a feeling of incoherence and confusion, which can never leave the player and ruin the experience. 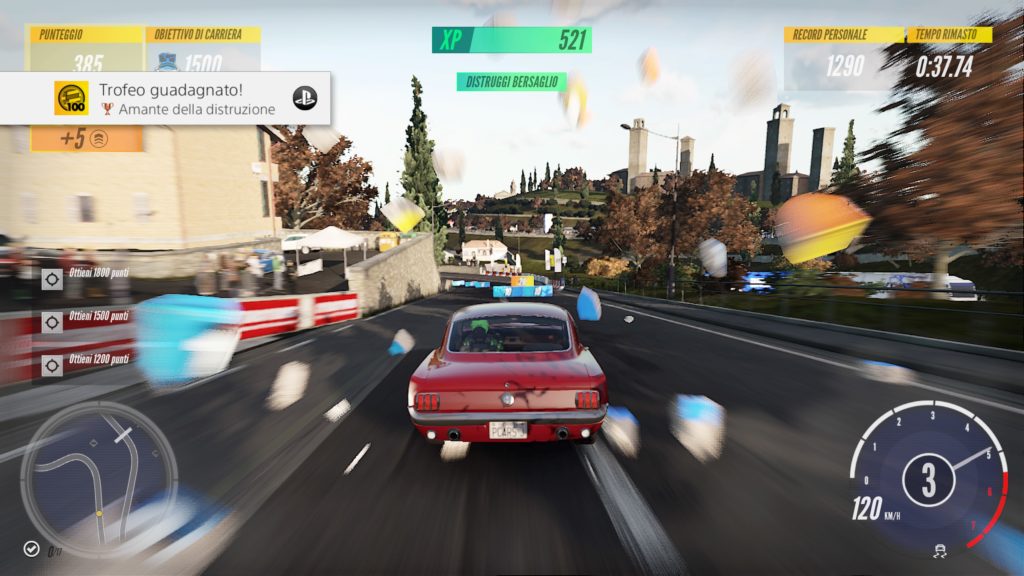 Having overcome this obstacle, which largely depends on personal preferences, the offer proposed by Project CARS 3 is more than satisfactory in terms of game modes, cars, challenges and tracks. At the heart of the game is the Career mode, which expertly organizes all the content into a sequence of challenges of increasing difficulty. The vehicles are characterized by a class to which they belong, which depends on their base power and any upgrades applied to them.
For each category there are 4 groups of challenges, each consisting of 4 levels, for each of which you are called to achieve 3 objectives. By satisfying the latter, more advanced levels, challenges and categories can be gradually unlocked. In some cases there are restrictions on the vehicles that can be used, ranging from the category of belonging to the nationality of the manufacturer or even to the single model, or by limiting a certain type of traction. This approach ensures that the player uses a decent variety of vehicles “seriously”, thus learning different driving styles. There are 4 types of challenges for the individual levels, the classic races or time trials (launched lap or average of three laps) and a completely arcade mode: Breakout, which represents a nice diversion. The goal is to destroy the largest number of panels present in a track, also going to look for them on secondary roads or off the track. 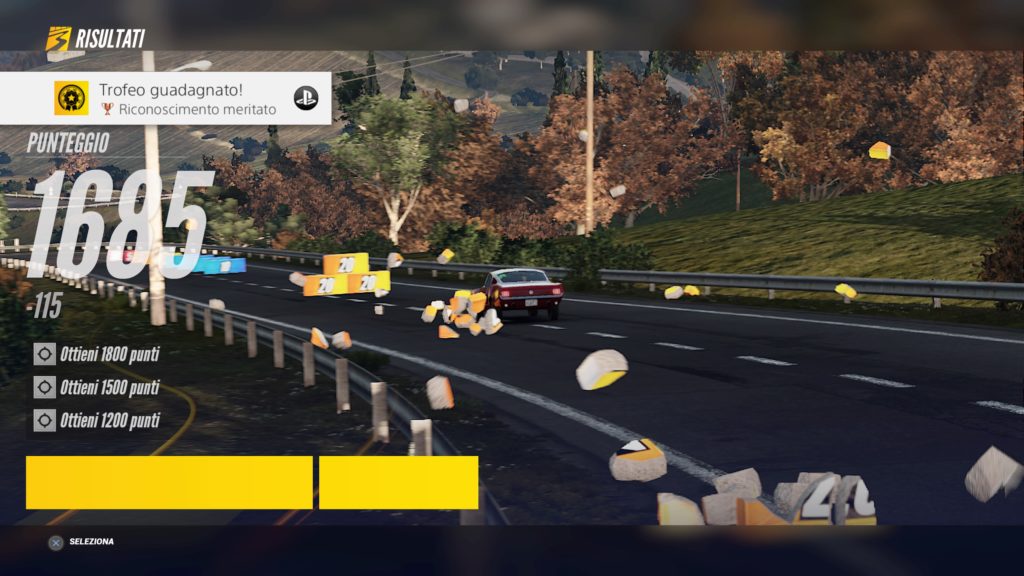 Another very smart choice is to not tie the player's hands and allow access to any level or category of the Career mode, as long as you pay the required credits. In this way goat and cabbage are saved: players looking for a "fair" challenge do not give in to temptation and want to do it on their own, while those who want to have everything immediately have the right. Provided you have accumulated enough credits, but this shouldn't be too difficult a mission, given the myriad of options available and the unlocking prices that are generally affordable.
The Project CARS 3 plate is completed by more than 50 tracks available, often in several variants, which include famous tracks including Monza, Hockenheim, Silverstone (of these three the historical configuration is also available), Monaco, Suzuka and the legendary Nürburgring Nordschleife , also available in three pieces. Speaking of variants and configurations, the liveries of the cars are fully customizable and for each the game offers both “dealer” paints and racing liveries. 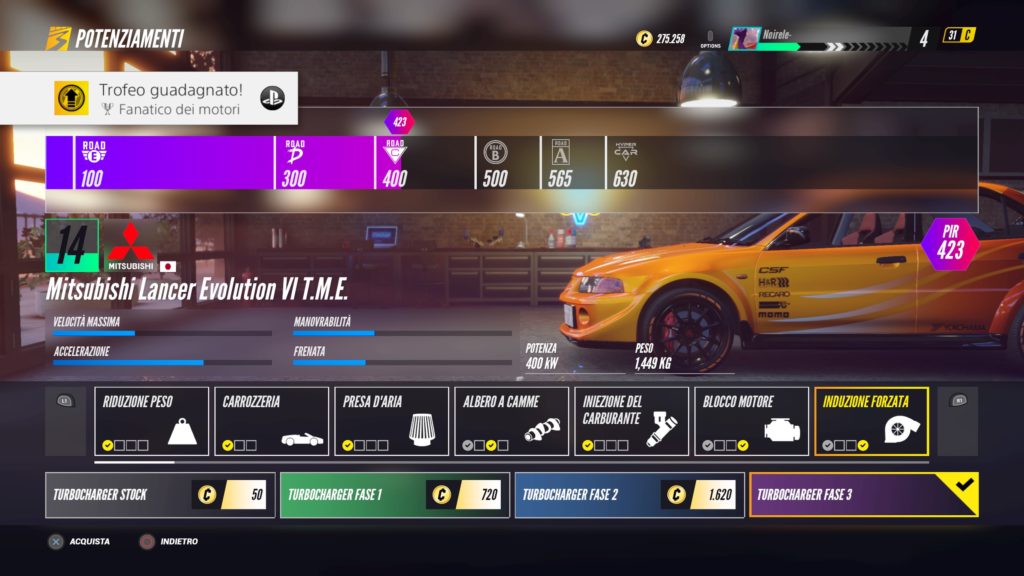 The driving feeling of the title seemed good to me. There are many driving aids available, to facilitate the approach to the game by the less experienced. The braking and trajectory aids are great for starting, but to deactivate as soon as you take the measurements, otherwise you end up driving on tracks without learning anything. For more advanced aids (ABS, Traction Control and stability) you can proceed step by step, detaching them one at a time.
Aids on the runway are not as satisfying: near the curves, markers indicate the braking point, the rope point and the exit point. It is a pity that the braking point is often imprecise, it is usually set too early and therefore leads to braking in advance. Furthermore, being static indicators, they do not take into account the instantaneous speed, the machine being used and not even atmospheric conditions. A system definitely to be reviewed. 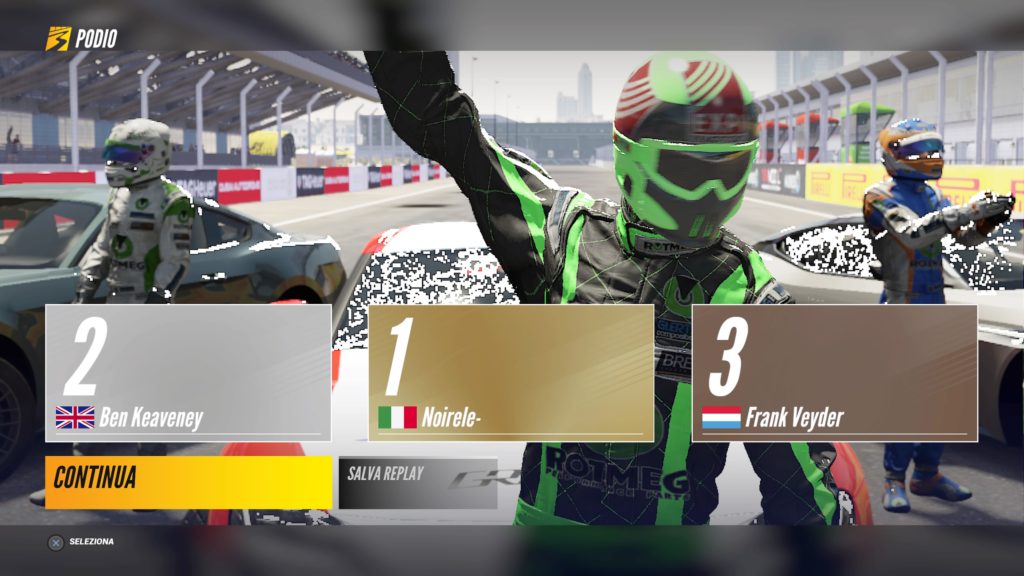 The really sore point of Project CARS 3, at least for the PS4 Pro version the subject of this review is the graphics sector, which is absolutely insufficient. Framerate and image stability are often plagued by slowdowns and ladders, not only in “crowded” situations, but also only on tracks with more details (such as the street circuits of Shanghai or Havana), or in the rain. The graphic effects are also annoying. The fog and the glare of the setting sun are practically patinas on the screen, and in the pouring rain the clouds of water that rise from the ground appear as white blobs that detach too much from the surrounding elements. At night, the colors appear too saturated and bright, too unnatural. It reminds me of the old Need for Speed ​​Underground 2, but in that case the exasperation was a precise stylistic choice. The icing on the cake, so to speak, is the visual glitches generated by the reflection of the setting sun: in some tracks it causes the appearance of strange white textures that cover the glass of the cars. The textures of the asphalt instead are just ugly and grainy of them. For intellectual honesty, none of the graphic problems described affect the game irreparably, but the whole thing makes even the less obsessed with graphics like me turn up their mouths. 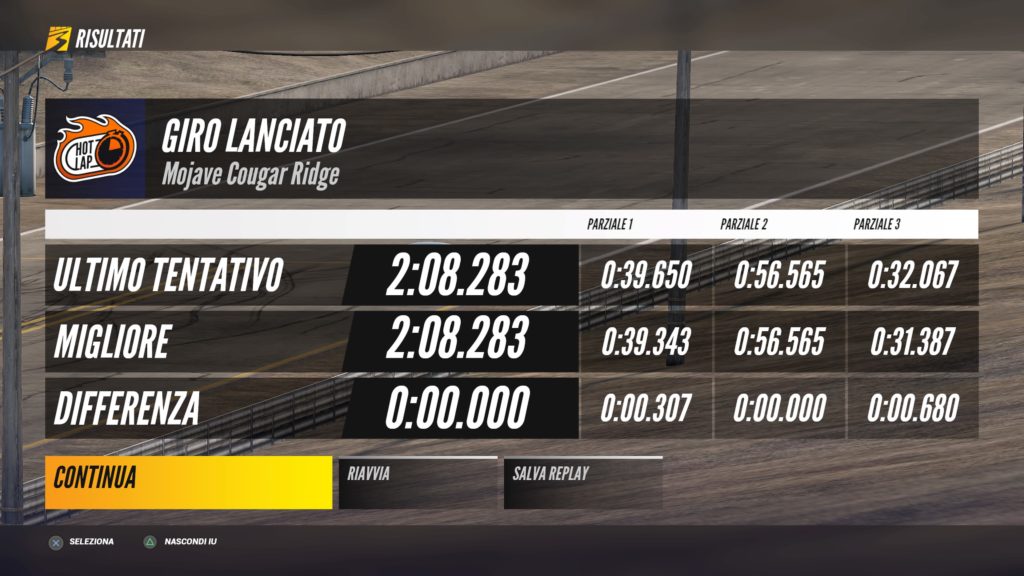 And if we want to go on with the little problems, then the list is likely to get very long. Some of those found are: the disappearance of the icon of the car in your garage following a change of livery, the change of livery that sometimes "skips" the first race, the captions of the dialogues that sometimes remain superimposed for the entire race, the time results in the Time Attack modes which are patently wrong. Little things that do not make the title unplayable, of course, but they are so many and frequent that you can not miss them and leave a sense of carelessness and sloppiness that does not do well.
Project CARS 3 is a title that still amused me. I still have to adequately explore the online mode, which appears full-bodied, also thanks to the asynchronous challenges. Despite the small (and less small) problems encountered, I still consider it a purchase to be considered for those who are hungry for running games.

Matteo Runchi - July 30 2021
Alex Afrasiabi's name is the only one to appear, along with that of President J. Allen Brack, in the lawsuit that the state of California ...