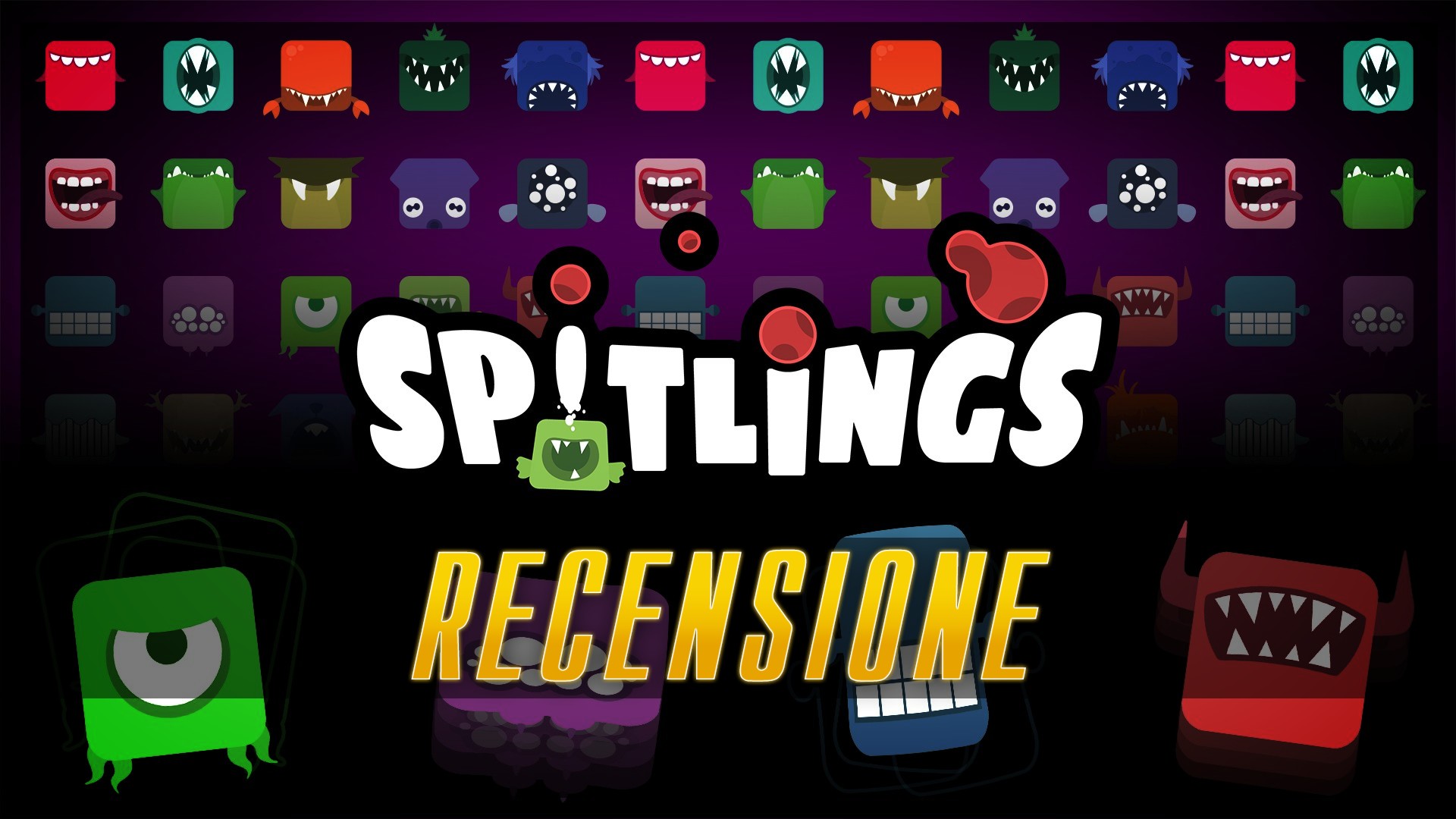 After Hayfever, can you imagine another game in which you have to do something that, in this period - and in reality always, if you have a minimum of education - is not really viewed favorably? That's right, in spitlings, as the name suggests, our main activity is to ... spit. The title, developed by Massive Miniteam and published by HandyGames, focuses precisely on this.

Spitlings is proposed as a classic platformer, with a spirit strongly arcade. In the game we impersonate funny rectangular creatures with teeth, which are mysteriously attacked by what appears to be a kind of alien force. This, similar to jelly, traps most of these creatures and it is up to us players to climb backwards the floors of the main tower to be able to free them all. Given the nature of the game, obviously this shy incipits narrative is enough and advances, as the title focuses on game action and gameplay. During our adventure the central focus turns out to be the movement mode. We can move in all directions, but the main actions are essentially two: spit downward to simulate a jump and break off the ground e upward to break environmental obstacles and neutralize the jellies that we encounter on our way. This particular system of movement, it must be said, may initially be rather cumbersome and not very fluid, but it soon reveals itself functional e dynamic, of course, provided that you become familiar with the game system.

Le munitions at our disposal - if we want to call ours salivary secretions - obviously they are not infinite, therefore we cannot abuse them. Once our character has finished his teeth, he can no longer spit and, consequently, remains exposed and vulnerable. To reload the shots we have two different options: it is possible to hold down a certain key (but it is good to do it only when we are sure we are not too exposed) or to take advantage of special recharge points scattered around the levels. 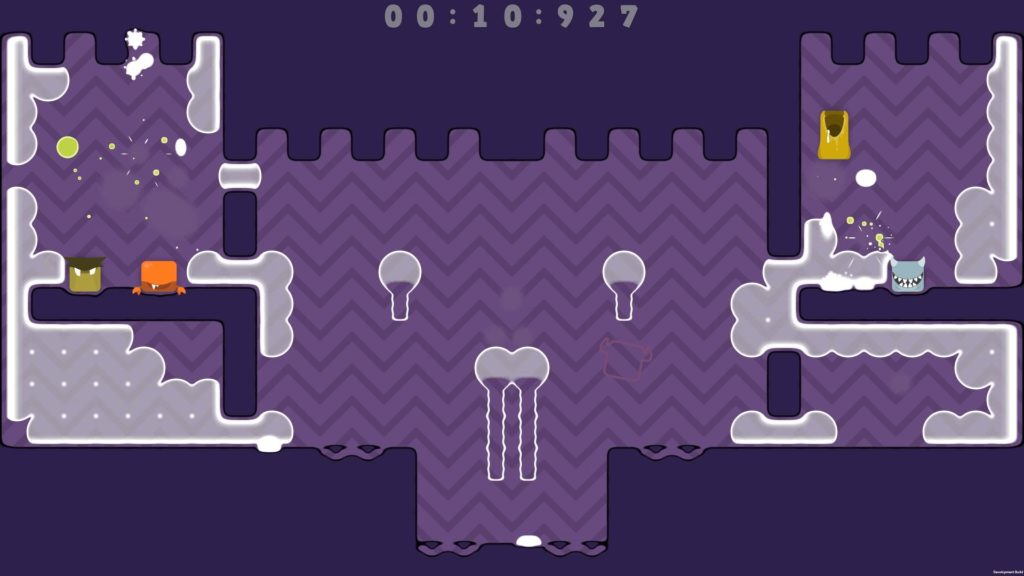 .. between one spit and the other

Il level design of Spitlings turns out to be simple, minimal but at the same time rather valid. In fact, the map mainly consists of the tower that we are called to explore and gradually free from the alien substance. The actual game and action sections are represented by the bring them scattered within the structure, in which ours are enclosed nice friends. By accessing these, our task is to progressively free the rooms full of enemies. And it is precisely here that the heart of the gameplay it makes itself felt. If the initial levels are simple enough and are practically a tutorial, as you continue to save our friends it turns out to be a test of reflexes, cold blood e timing... but also of patience e steady nerves, especially in particular sections.

The very structure of certain settings, in fact, often leads to having to untangle within tight spaces, trying to avoid last moment the enemies, or even just a to pray that these change trajectory in extremis. This dynamism of the levels was created by the developers through special environmental escamotage, such as blocks of jelly that slow down our movements but at the same time protect us from enemies, or even platforms that make our character bounce and risk causing him to face certain death. A style of play that seems to take inspiration from other titles of the genre - just think of Super Meat Boy - and which, personally, I found to be yes funny e satisfactorybut also enough frustrating e tedious, at least in some specific places. 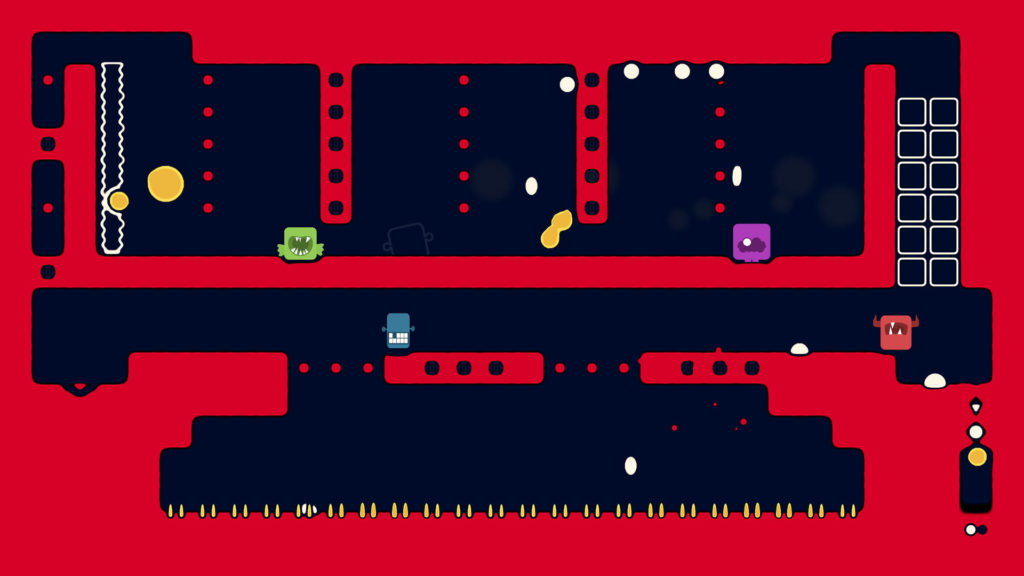 A simple and clean style, even among friends

From an artistic and technical point of view, Spitlings it defends itself well. It is obvious that it is a simple and unpretentious game, but still the style cartoon combined with the classic two-dimensional settings it always leaves a pleasant sensation, aesthetically and functionally speaking. Even on the performance side, the game does not present any problems. The PC tested version is fluid in any situation and does not lend itself to any slowdown, hesitation or drop in frame rates. It is still not clear to me why, as soon as the title was launched, the preset standard resolution was one of the worst and I had to change it manually, but surely it is not worth anything to dwell on much. Given the type of game it represents, but above all seen the type of gameplay who proposes, the opposite would have been not only strange, but also decidedly annoying. Among the various functions that the game offers there is also the possibility to play online, both in multiplayer and locally with a group of friends. In this case, our companions can use the Spitlings that we freed during the adventure, which can also be changed in single player at any time by selecting them from a special collection. 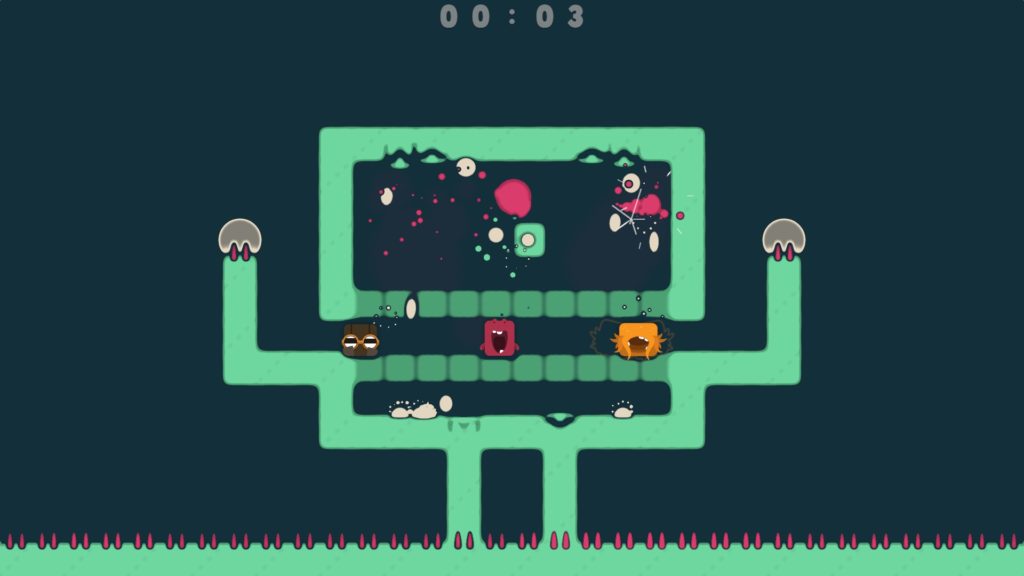 Recommended, but not at all

Spitlings is a title simple e without any pretense. Where for simple I am not referring to the difficulty of the title, which can reach, in some moments, unexpected peaks, but to the type of gameplay it offers. This is the classic title with which to be distracted and which can be completed in less than half a day. Because of its simplicity, it turns out to be truly within everyone's reach. But not for this reason I feel to recommend it to anyone: if you are looking for something more elaborate, or at least something less difficult, you should consider saving your wallet for this tour.

Call of Duty: Warzone, trailer of the Swag mode

The release date of Close to the Sun, the horror of the ...