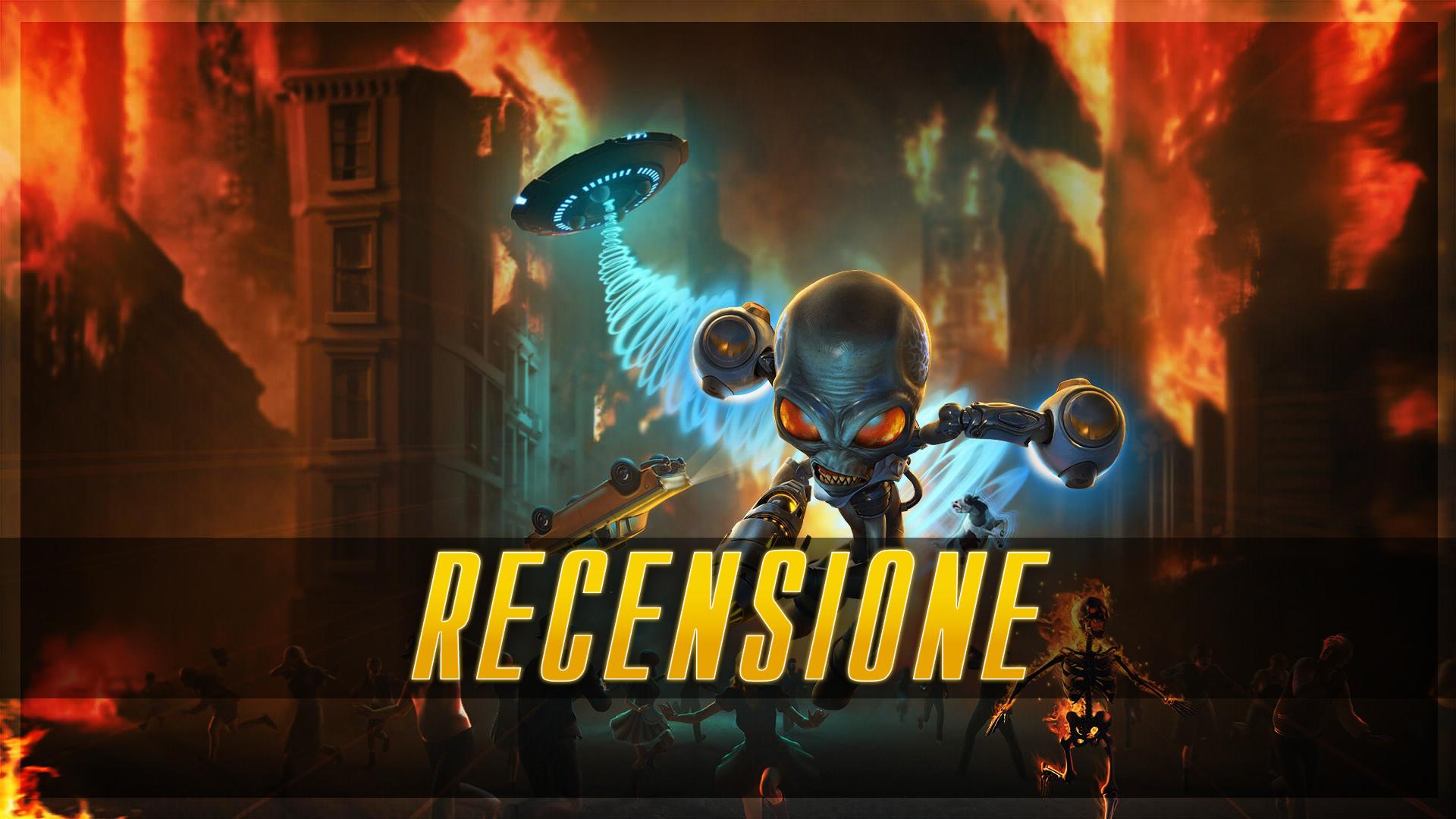 Destroy All Humans! must have something magical if despite fifteen very long years have passed since the release of the title the Adventures of our nice (and cynical) alien Crypto continue to be extremely fascinating and interesting. The feeling that I had pad in hand at the first contact with the title was a déjà vu, as if suddenly I had gone back through the years to when I was playing the original title on PlayStation 2. An emotion that did not seem entirely positive since, in fact, I had the impression of reliving something already seen.

I Furon I'm running out of DNA and the only way to be able to appropriate the genetic material to reproduce is to go to Earth and collect some, exploiting the "useless" human beings. The fearsome scientist Orthopox sends the Crypto 136 clone to planet Earth but, tragically, fails to fulfill the mission, being taken hostage by the life forms present on the planet, commonly called "human". To remedy the failure of the mission, Orthopox therefore sends the ironic (and very cynical) Crypto 137 to Earth, a clone that shares the same objective with its predecessor: conquer the Earth, free the poor prisoner and, more importantly, recover as much DNA as possible to allow the Furon race to survive.

The game, like the original, consists of some short missions of various types to be carried out in certain areas of the United States of the 50s and often force the player to use different approaches: as we progress we discover in fact how to use certain equipment in the game and how they can come in handy to overcome obstacles in some difficult situations. Crypto, probably the craziest alien ever seen in a video game, has numerous skills: from reading the thoughts of the people he is surrounded by (and some of these may leave you speechless or burst out laughing) to dethrone the turn rivals or dissuade them with a power that makes them take control for a few minutes. You can also use the spaceship, a real flying saucer capable of destroying any object or monument you encounter, thanks to the lethal laser it is equipped with.

But you are wondering, collect the DNA what do we need? The answer is very simple: reinforce the weapons, the skills of the protagonist and its spaceship. In case you are not satisfied with the outcome of the mission, do not worry, the game gives you the opportunity to try it again and gain even more genetic material to strengthen yourself.

Unfortunately this remastered version of Destroy All Humans brings with it some problems that are also found in the original game. The "wow" effect that can be found at first glance with the game, gradually discovering the mechanics, it definitely still remains charming and fun. However, once the missions have started, the player can find himself in the (unpleasant) feeling of falling victim to a constant already vu: let me explain better, the impression one has is that in the levels the same game actions are constantly repeated in however slightly different contexts with the "aggravating circumstance" of having a level of challenge that is also quite low. For the players we say more "competitive", if you want to platinum the game 100%, however, there are sub-missions that can slightly raise the challenge to unlock even the precious trophies.

What brought me a bit of bitterness in testing the game was that, after a year, the title basically didn't show much change both in terms of graphics and mechanics compared to the version examined last year at Cologne Gamescomindeed, the technical defects (fortunately not too obvious) seem to have remained unchanged compared to the beta version tested. However, most likely any bugs will be fixed with a patch on Day One. On the other hand there is an unpublished mission.

Destroy All Humans is definitely a title that lovers of science fiction and black humor will appreciate, both for the particular settings and, above all, for the extreme and relentless sympathy of the protagonist: Crypto. I was lucky enough to be able to play the original title on PS2 at the time and I must say that, pad in hand, with the PS4 version I had significant positive feelings, as if it had been a sudden leap into the past, even if the enthusiasm is been partially dampened by the changes that in this edition seem to be substantially non-existent. The guys from Black Forest Games and THQ Nordic have done a great job anyway and new players can have fun exterminating humans. I remind you that Destroy All Humans will be available on PC (Steam), Xbox One and PlayStation 4 for the price of € 39.99 on console and € 29.99 on PC.