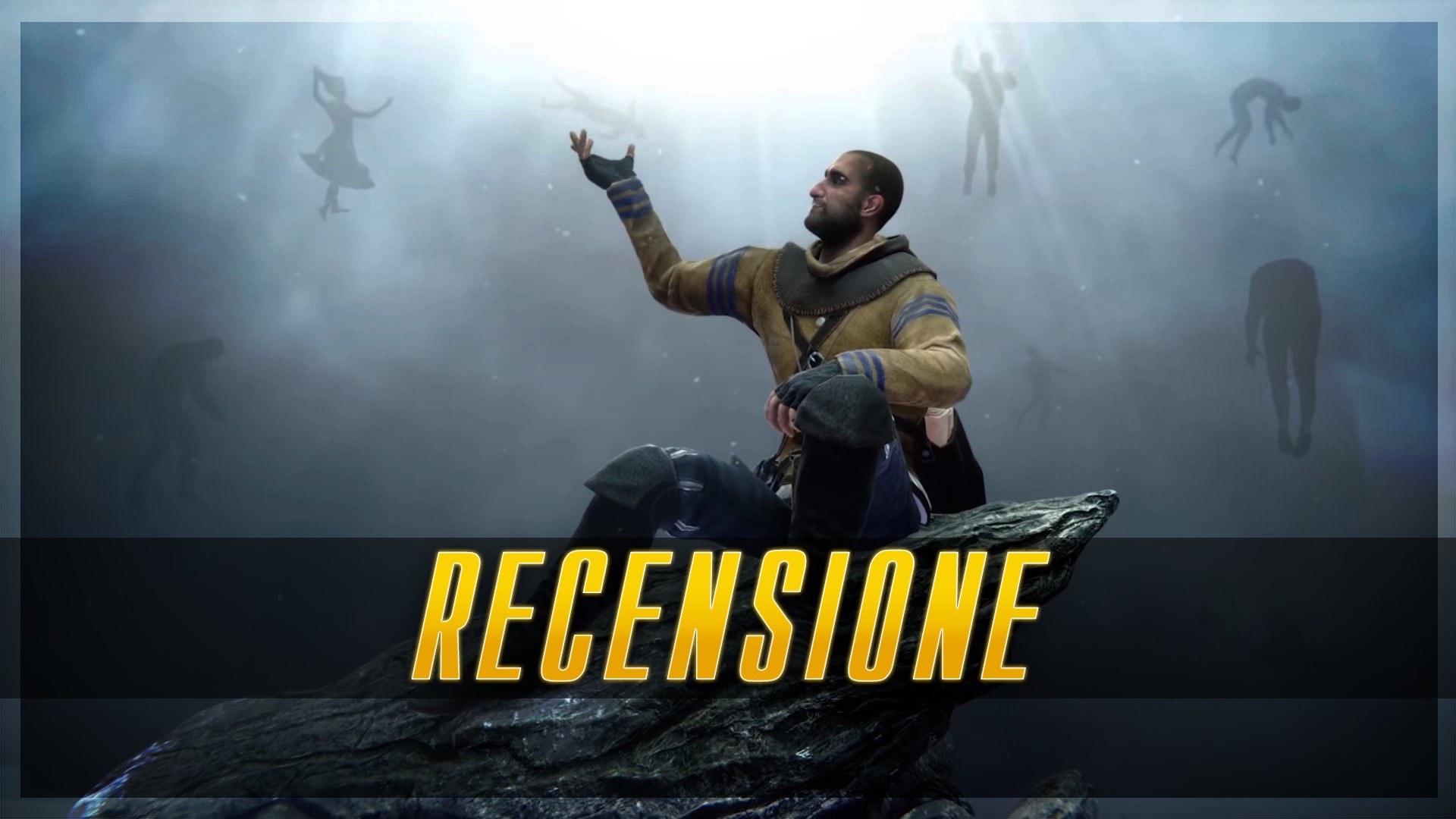 A few days have passed since the arrival of Master Mirror, latest expansion for GWENT: The Witcher card game, but the overall picture seems clear enough and is also very positive this time. Master Mirror arrives after six months of apparent press silence from the development team, understandable given the immense hardships created by the pandemic. The long wait, however, did not seem to suggest anything good for the game. Nothing could be more wrong: I am very happy to have been denied. 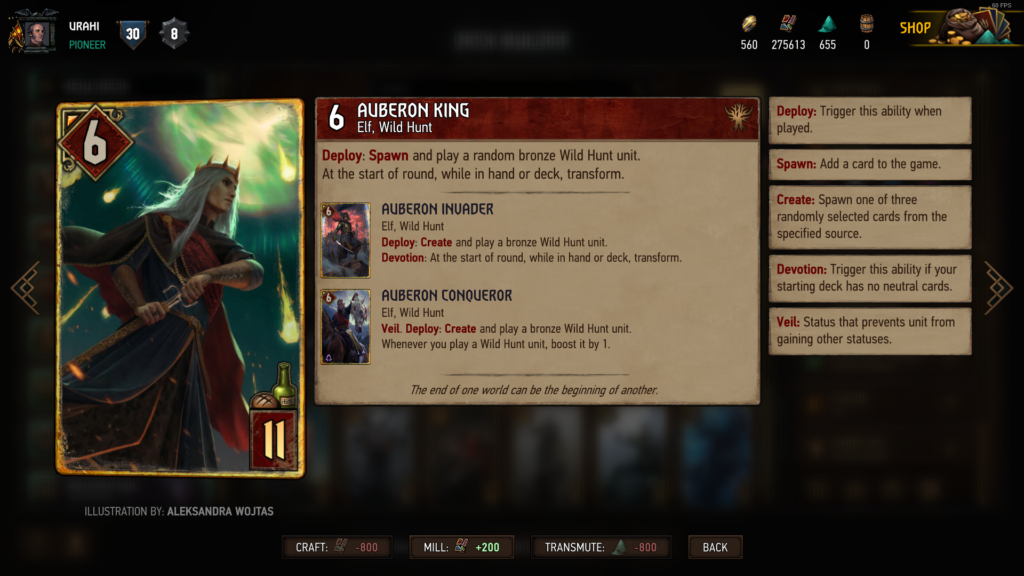 Master Mirror is probably the best expansion made, both in terms of mechanics and from a thematic and aesthetic point of view: I am aware that I have already used this phrase many times in the analysis of the various updates and there is nothing more beautiful than being able to repeat it once again. The choice to use Gaunter O'Dimm as a glue for the expansion it has contributed immensely to the feel of a real set, as in MTG or Hearthstone, and not simply to the addition of a generic pile of cards for each faction, perhaps united by a common setting or complementary mechanics.

The previous expansion, "Merchants of Ofir" he had introduced two new types of cards: stratagems and scenarios. The former represent bonuses that can be activated during the first round by the player who "loses" the coin toss and therefore goes first, while the latter are particular multi-stage artifacts that are activated by playing cards with specific tags. Master Mirror doesn't hit the hand so much with the news, but some of its new card "cycles" have had more impact on the game than ever before. 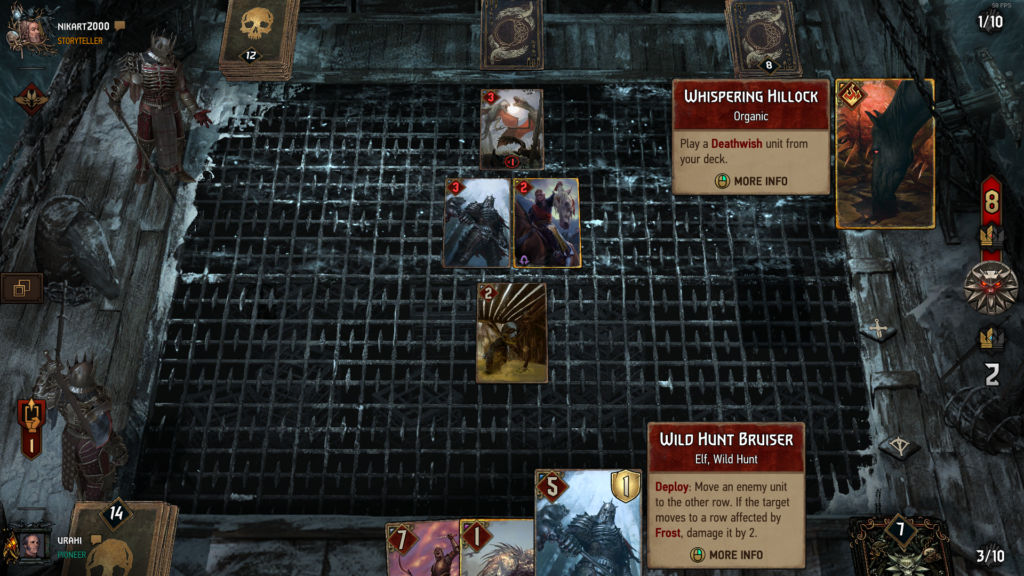 The keywords added with the new expansion are the following:

- Devotion: Enhance the effect of a card, provided that our deck does not include any neutral cards.

- Echo: Returns the top card to the top of the deck at the beginning of the next round and after being played a second time it is removed from the game.

- Veteran: Increases the unit value by one point at the start of the second and third rounds.

- Conspiracy: Side effect that activates if the target is a unit with spy status.

- Symbiosis: Whenever a card with the "Nature" tag is played, it generates a Treant on a random row whose value is equal to the number of symbiosis cards you control

- Wound: Status that at the end of the turn damages the unit by an amount equal to its value. If it survives, the status is removed after a single activation. 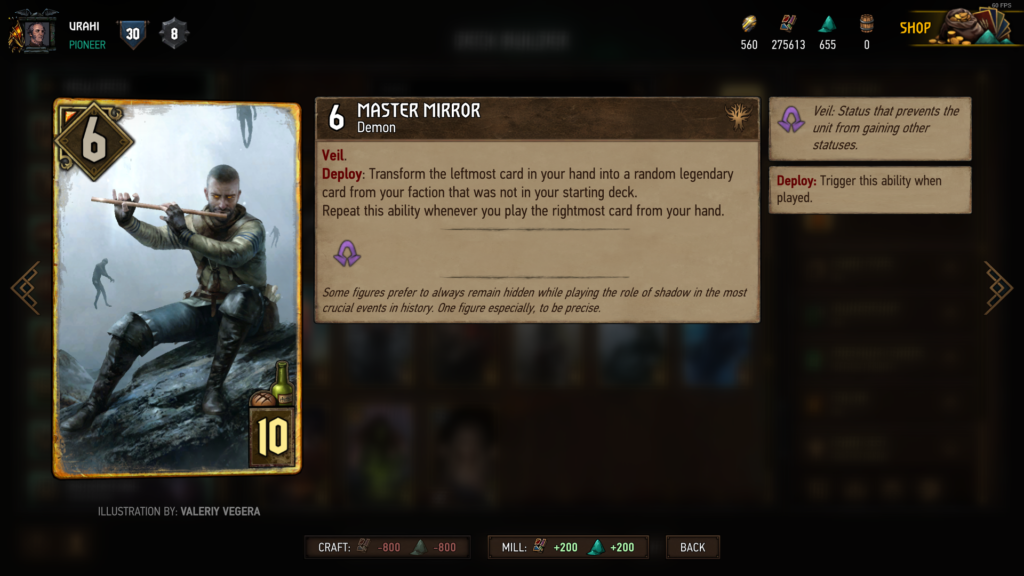 An at least summary analysis of the Master Mirror keywords is a must. Let's start with Devotion, which is apparently trivial, but what seems to be a limitation to deckbuilding ends up unlocking countless possibilities and also contributes to the diversification of the goal, given that the inclusion of dominant neutrals or certain "tech cards" becomes less palatable, in especially if the deck strategy already lends itself to a certain type of game. Eco instead appears only on one card per faction and the not very high power level is compensated by the consistency of being able to play the same effect twice. Moving on to Veteran, it is none other than Skellige's old faction ability, which appeared in the open beta but never seen since Homecoming. 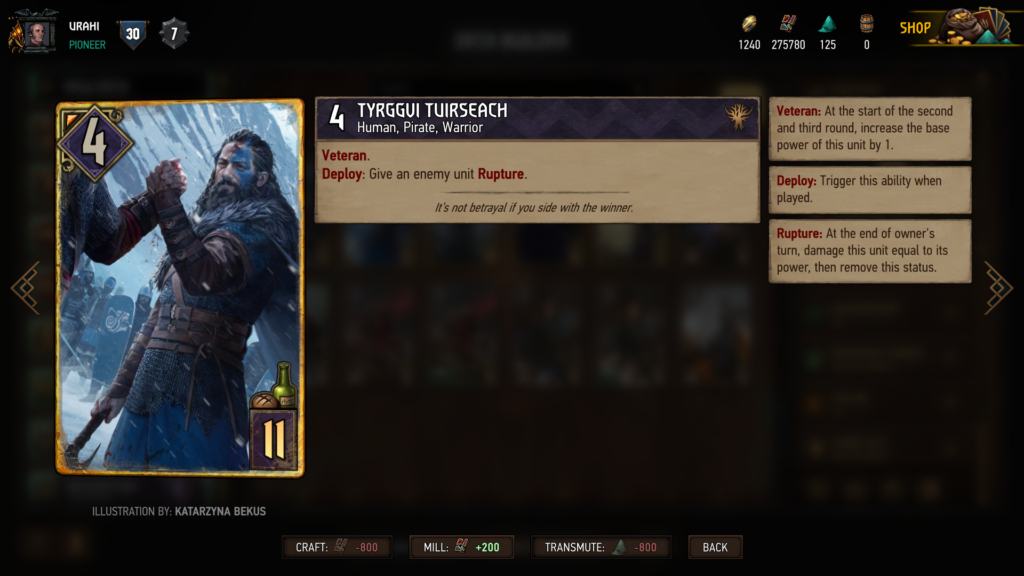 Conspiracy further pushes Nilfgaard's synergies with the spying units, but moreover this aspect has always been central to the identity of the faction. Symbiosis is a good substitute for Armonia (RIP), an archetype that was quite clubbed in the latest patch, which imposed row locks for the effect to activate. Velo is a twist on the homonymous concept already present in numerous other cardgames (including the immunity of Gwent) which means that a subject "cannot be the target of spells or abilities", the difference is that in this version it can be damaged but do not suffer status, whether beneficial or harmful: therefore no poison or lock. Again, although the keyword appears on multiple cards, the main cycle is made up of a standard base repeated for each faction.

Injury is considered as a keyword but appears on a single card and was nerfed in the recent hotfix. Better this way, given that it is also the most polarizing: either we have a valid answer or our destiny is sealed. Another central mechanic, but which for some reason does not have its own keyword at the moment, is Transform, a skill that also appears in a cycle in this case, that is, one card per faction. Units with transforms, as you can guess, change from round to round, gradually becoming more powerful and gaining side effects. A sort of "veteran to the nth degree". 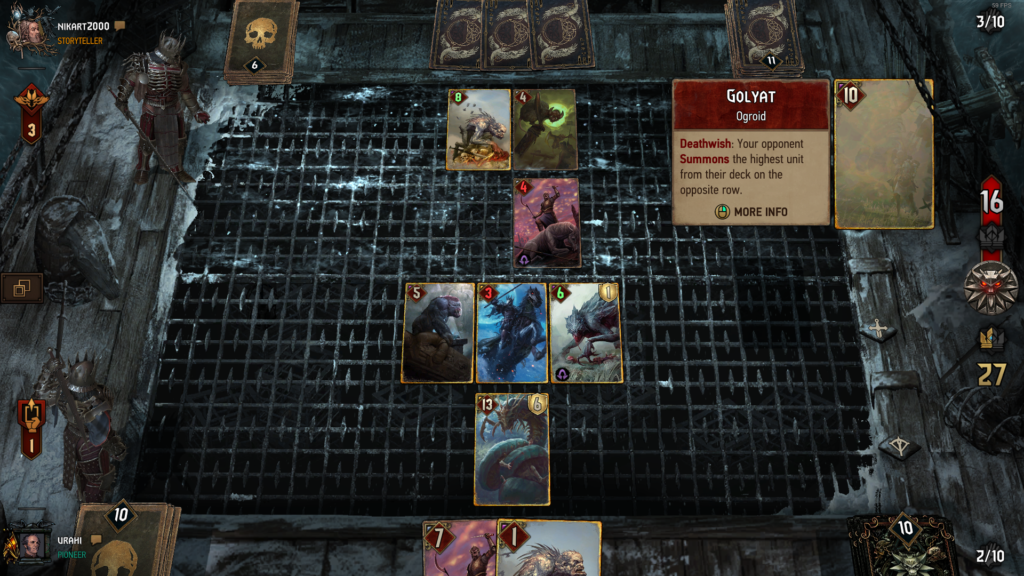 The best part is that each arrives accompanied by three different illustrations, one more beautiful than the other, and the evolution of the cards also tells the story of the characters that are represented there. A touch of class that I have rarely seen in a cardgame, as well as a really welcome surprise for anyone who appreciates the lore or the books of The Witcher. Also in the rest of the Master Mirror card pool, references to the setting or to certain events are omnipresent and inserted (sometimes) not only as a flavor text, but in an elegant and tied to gameplay way. As already mentioned, the level of illustrations is always wonderful: now I dare even say that it is superior to MTG. It should also be admitted that there is less than 80 cards compared to 200 and more than one set of Magic, but that's it: the images speak for themselves. It's a bit of a shame that the Wild Hunt did not have a themed expansion, but moreover Gaunter had already stolen the scene from the Edgelords elves in The Witcher 3, so even in this point of view it makes perfect sense. After a somewhat turbulent launch, the goal seemed to have quickly stabilized in favor of Skellige, which could boast a winrate close to 65% at the highest levels, but fortunately the developers intervened quickly and broke the monopoly. Maybe also too brutally.

Master Mirror is a set in which the "filler" is virtually absent and in which even the weakest cards can still give ideas for deckbuilding, in part thanks to Devotion that rewards the absence of neutral cards in the deck. I must point out that also in this case the percentage of legendary cards stands at 30% and this touches on the ridiculous. Nonetheless, GWENT remains one of the most loyal free-to-play cardgames available on the market, as well as one of the few where you can complete your collection without having to invest a single euro. The expansion was accompanied by a full-bodied rebalance patch and various adjustments that (potentially) revived many old cards that seemed destined to be forgotten. The new mastery pass is also expected in August, which like the previous one will offer a free and a paid component, with a price of around 10 euros, but both will give access to a huge number of rewards, both in terms of gameplay and cosmetics . 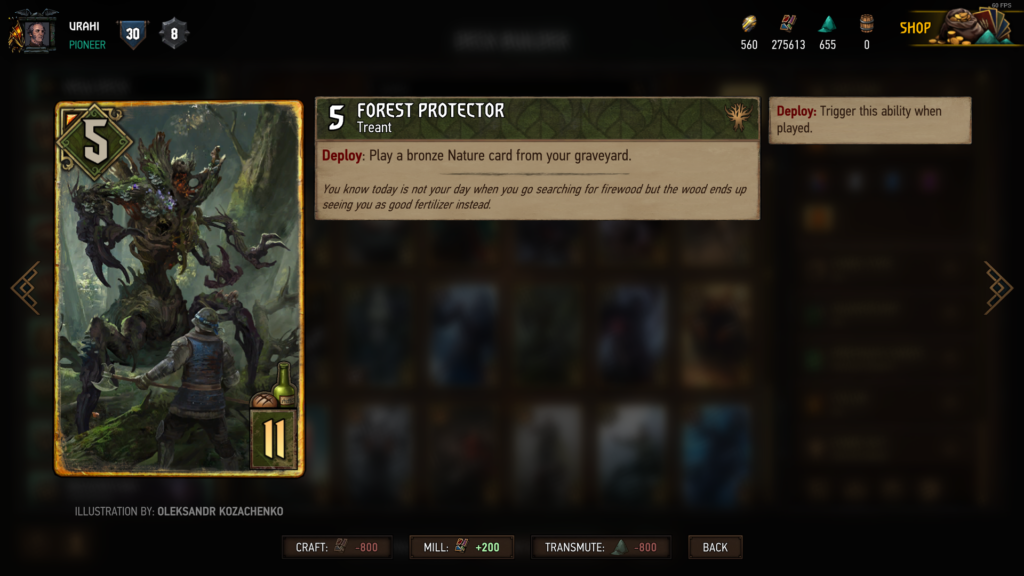 GWENT is a game that deserves much, much more attention than it has, especially for those who have already had experience with the world of The Witcher, or almost all of them by now, but also for those who appreciate a good card game. It certainly has limits, first of all a sort of "themed" design that often results in archetypes guided by the choices of the developers. But, as in many things in life, in Gwent's deckbuilding the devil is in the details: changing even just three or four cards around a central core can lead to drastically different game experiences, also by its nature the game always rewards skill, knowledge and adaptation. Final summary: Master Mirror is a bomb, GWENT has never been so fun and with such a palpable lore. Now we just have to wait for a rework of the arena.

Nicolae Locatelli - November 28, 2020
Immortals: Fenyx Rising is shown in an interesting video comparison between the PS5 and Nintendo Switch versions. The Ubisoft title focused on Greek mythology is the protagonist ...
BusinessWire