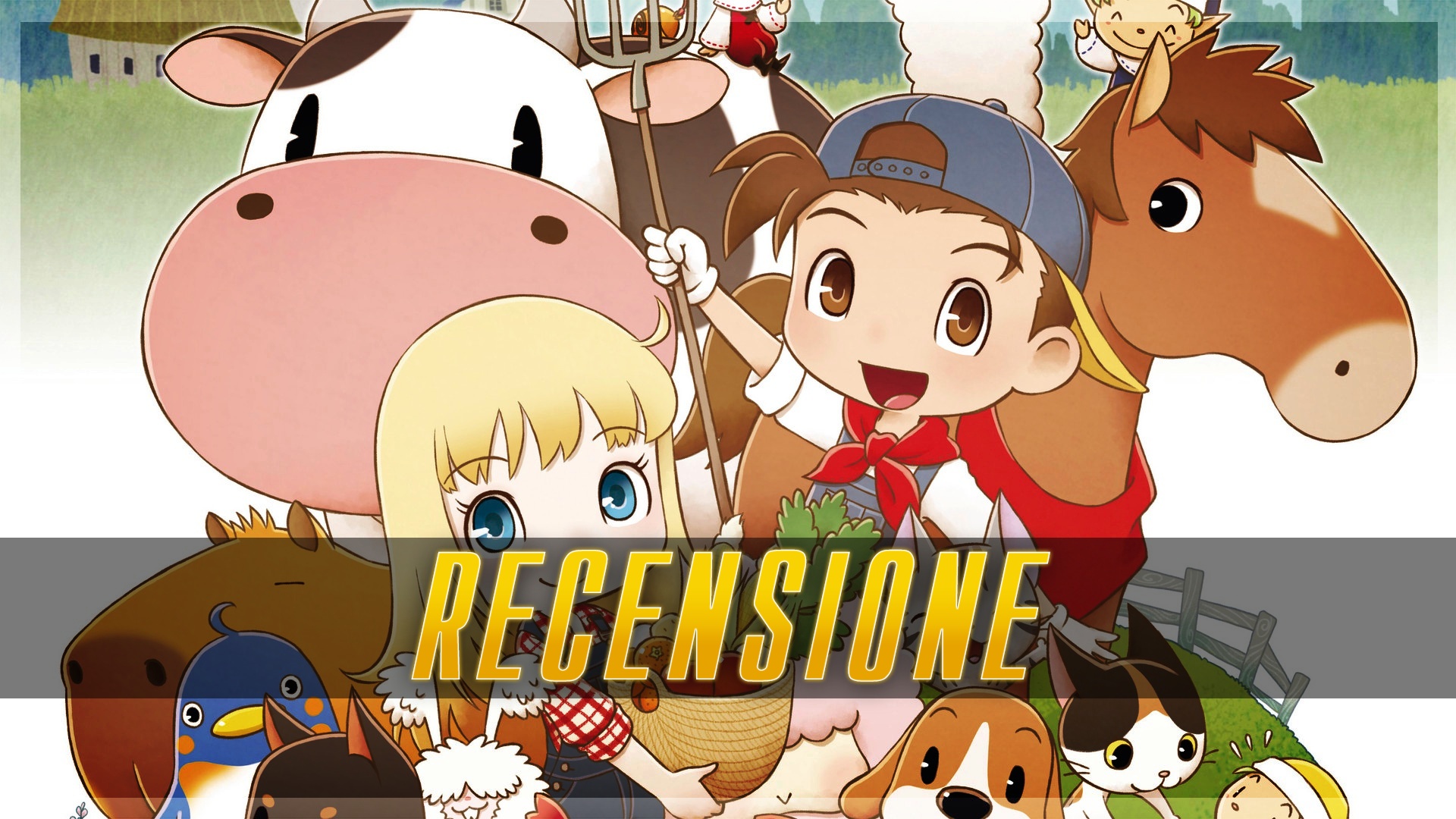 In most video games - starting from RPGs to Gatcha in recent years - the concept of farming (or grinding) has always been seen as that element belonging to the category "either you love it, or you hate it". Performing a certain action is a gameplay dynamic that extends the longevity of a game ... proving at the same time a double-edged blade. After all, even a warrior blessed by the northern star, a member of the order of celestial knights and in possession of the definitive blade CAN be bored once 2000 minor goblins are dismembered.

What happens, however, when farming and repetitiveness become THE MAIN MECHANICS and you build a simulation and social setting within it? You get the set of Harvest Moon, a simulation role-playing game where we have full control of the development of a personal ranch and where at the same time we have the opportunity to build our own social network. Over time, the series has managed to create its own niche of fans, even going so far as to influence independent productions such as Stardew Valley. Then in 2014, the drama arrived: Natsume acquires the brand, tearing it from Marvelous and between a remastered of the Light of Hope chapter and the announcement of One World, the Japanese publisher struggles to regain the players' consent.

On the other hand, Marvelous has decided to implement a different strategy: a restart through the nomenclature Story of seasons and today I will tell you about my first approach to the series with the latest chapter coming out on Nintendo Switch and PC: Friends of Mineral Town.

On the new (but at the same time old) farm

Once the software is started for the first time, I am greeted by a letter and a gift from my grandfather: his farm, the place where I spent unforgettable days. It is his legacy and he gave it to me, a simple boy. All I can do is pack my bags and take the first flight to Mineral Town. 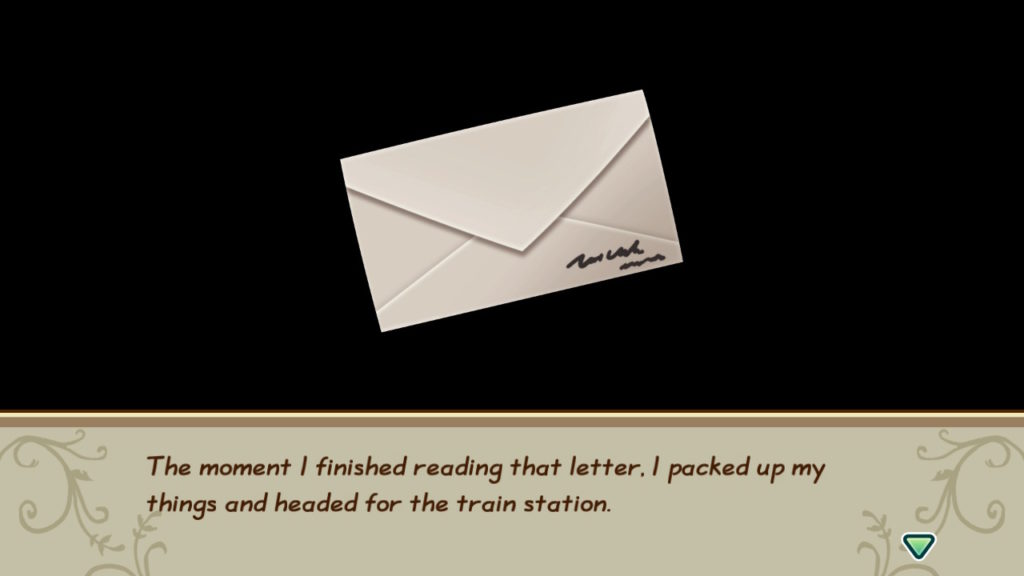 Once I arrive, I am greeted by Thomas: a minute mayor with a hat taller than he and I am introduced to the small town and its inhabitants and the services they offer. Jeff's shop every month offers different kits dedicated to the harvest, but also various ingredients to be used in the recipes that are occasionally passed between neighbors, Popuri's and Mr. Mugi's farm even has a service that allows the purchase of animals that will be added to my lot, a forge allows the improvement of tools through the exchange of money and materials easily obtainable by visiting the mine and so on. The whole city seems to have been built to meet my needs as a budding farmer. 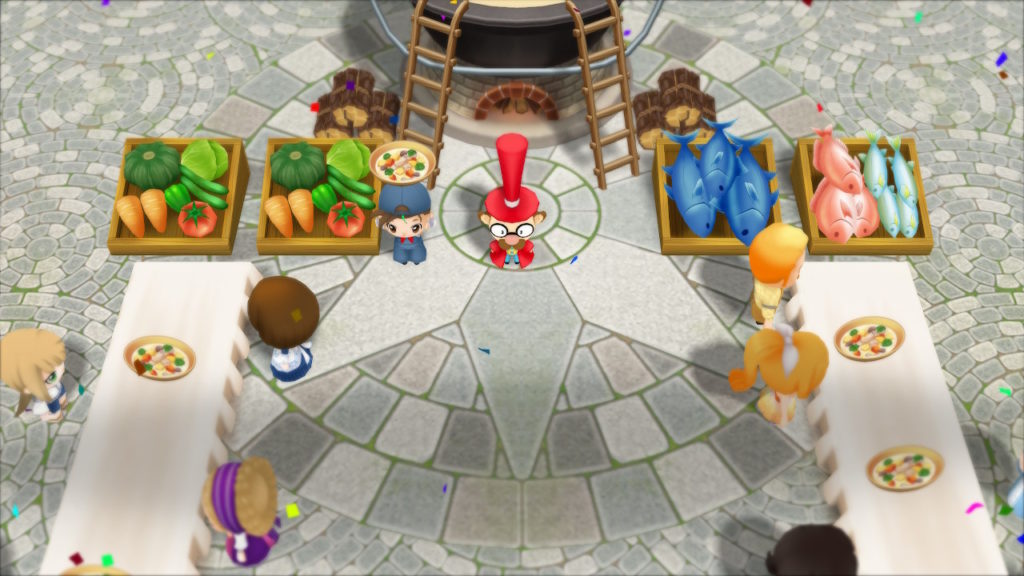 As if that were not enough, during the various seasons events of all kinds are organized: from culinary competitions to chicken competitions, from group dinners to beach evenings where we all witness breathtaking fireworks.
It will take some time, but in the end I too will be able to settle in and become a fundamental member of the community.

Story of Seasons: Friends of Mineral Town: too much work, little time and a lot of dedication

Here, take this last sentence and throw it in the wind. Story of Seasons: Friends of Mineral Town catches you with a thousand smiles and a premise that is not too different from other titles such as Animal Crossing, and then lock yourself in a cruel reality and where time is NEVER ENOUGH. The first few weeks have been a real disaster: whole mornings lost watering the harvest - especially when, for most seasons, there are at least four types of vegetables and each of these takes its days to grow. And when the morning ends, you already know that you have lost a lot of interaction with other residents, and the opportunity to visit most of the buildings and services. Every day is a race against time, but also against ourselves: planning and moderation are the keywords to be able to better manage your farm and "invoice" the money necessary to improve the structures and tools available to us. On the contrary, the system of Stamina and Fatigue punish a violent and poorly reasoned style of play. 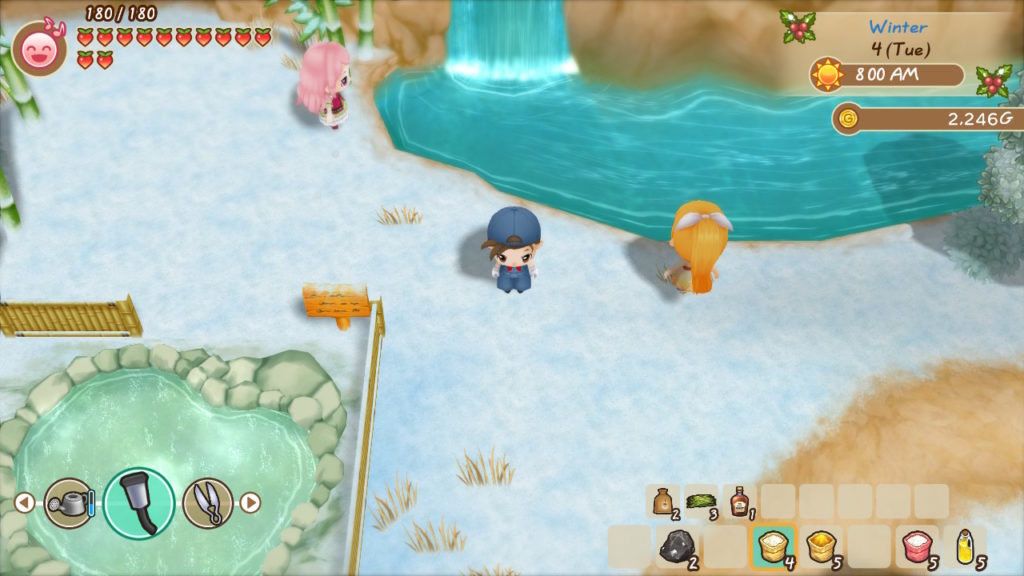 Not to mention the random factor within two particular moments of play: the derby and the exploration of the cave aimed at the collection of minerals. If in the first we have a simple bet, in which the winning horse acts as a multiplier for the medals acquired by the player and then exchangeable for some prize, the mine is a real hell made of RNG, if and perhaps. Not only do you have to pay attention to your health, but the more time you spend looking for the entrances of the next floors, the more the chances of finding important resources such as the Diamond or Mithril - necessary for the upgrade of tools and structures - decrease. 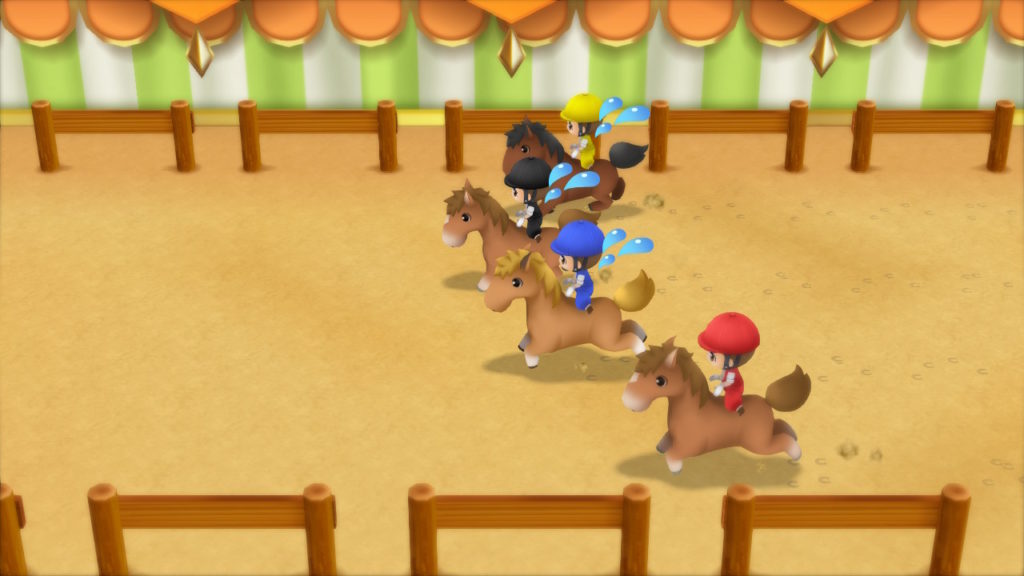 But if you think that all this preamble has been written with anger and pure "salt", you are wrong. After the first weeks, my tools started to level up allowing me to finish the crop care in a few hours, I started earning some extra money which allowed me to buy the first hen, which then gave birth to the others , with a little luck I managed to get rainy days - a godsend and the perfect opportunity to visit the mine and farm some minerals; and at the end of Autumn, my Green Dolphicc farm received its first upgrade. In conclusion, with a little patience the game showed its "good" side, rewarding me with a dopamine discharge that other titles of the same kind have not yet managed to give me.

The Velvet Room next to the Silos

By interacting with other residents, there is also the possibility of creating ties and relationships with those we consider interesting. Speaking and bringing gifts once a day, we are going to increase a bar that, once exceeded a certain threshold, allows us to unlock a series of events. By participating - when available during the week - these quests allow us to get to know our soul mate better. But be careful: just like in Visual Novel, any wrong choice can result in the loss of a few points, going to delay who knows how long the birth of your family. 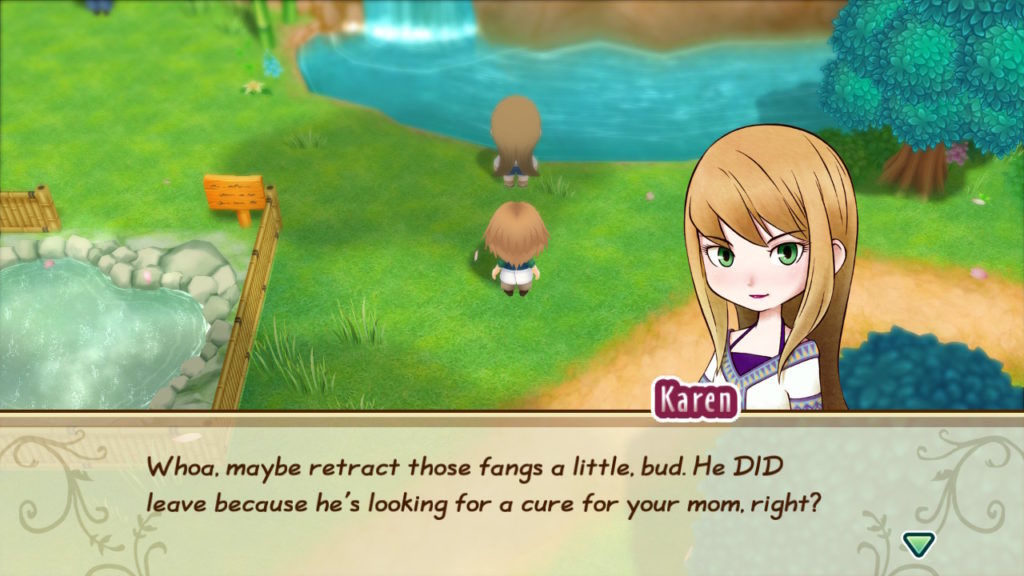 And although in my game my character embraced the Karen meme, for the first time the Marvelous series offers the possibility of starting relationships with residents of the same sex. And if you are the type of player who cannot do without completism, the ability to create multiple saves allows you to undertake what I would consider an odyssey to discover all the secrets of all the characters in the game.

Story of Seasons: A new light

At the end of this brief - but intense - experience with Story of Seasons: Friends of Mineral Town, I have the impression of having simply scratched the surface of a franchise that - from my point of view - deserves to be played at least once. The package packaged by Marvelous not only represents an excellent remake of the chapters Friends of Mineral Town and More Friends of Mineral Town, but also a perfect starting point for even the most "casual" players , thanks to some tricks not only concerning the basic mechanics, but also as regards the difficulty - scalable from the beginning of the first run. As for the Nintendo Switch version, the chibi style is perfect for the hybrid console, resulting pleasant not only during sessions in portable mode, but also for those in docked mode. 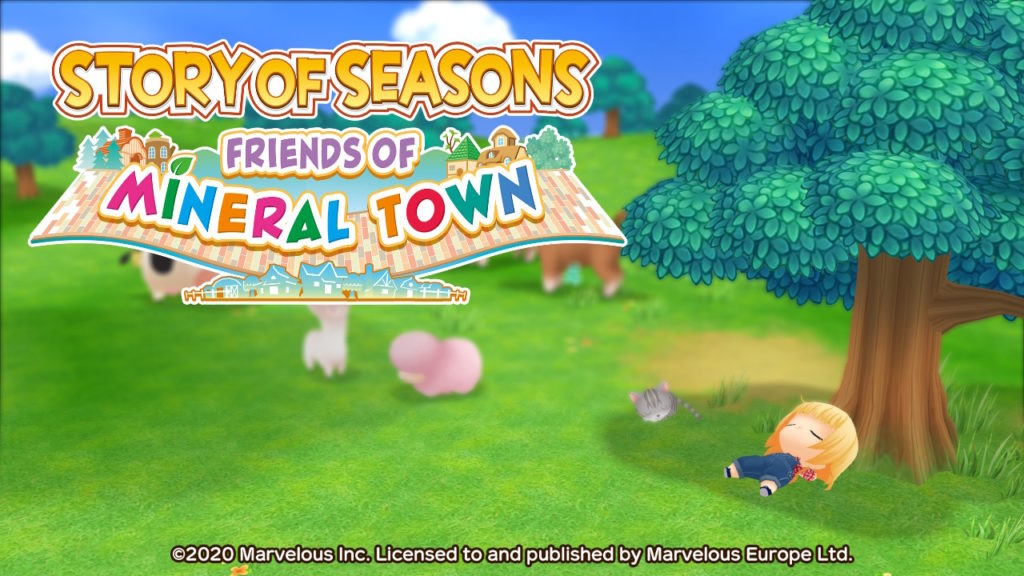 In conclusion: if you are looking for an alternative experience, discovering "New Horizons" in the agricultural sector, Story of Seasons: Friends of Mineral Town is a great option.

How does life go to Super Mario Odyssey?

Raw, the authors of the Zelda remake, take for new title ...