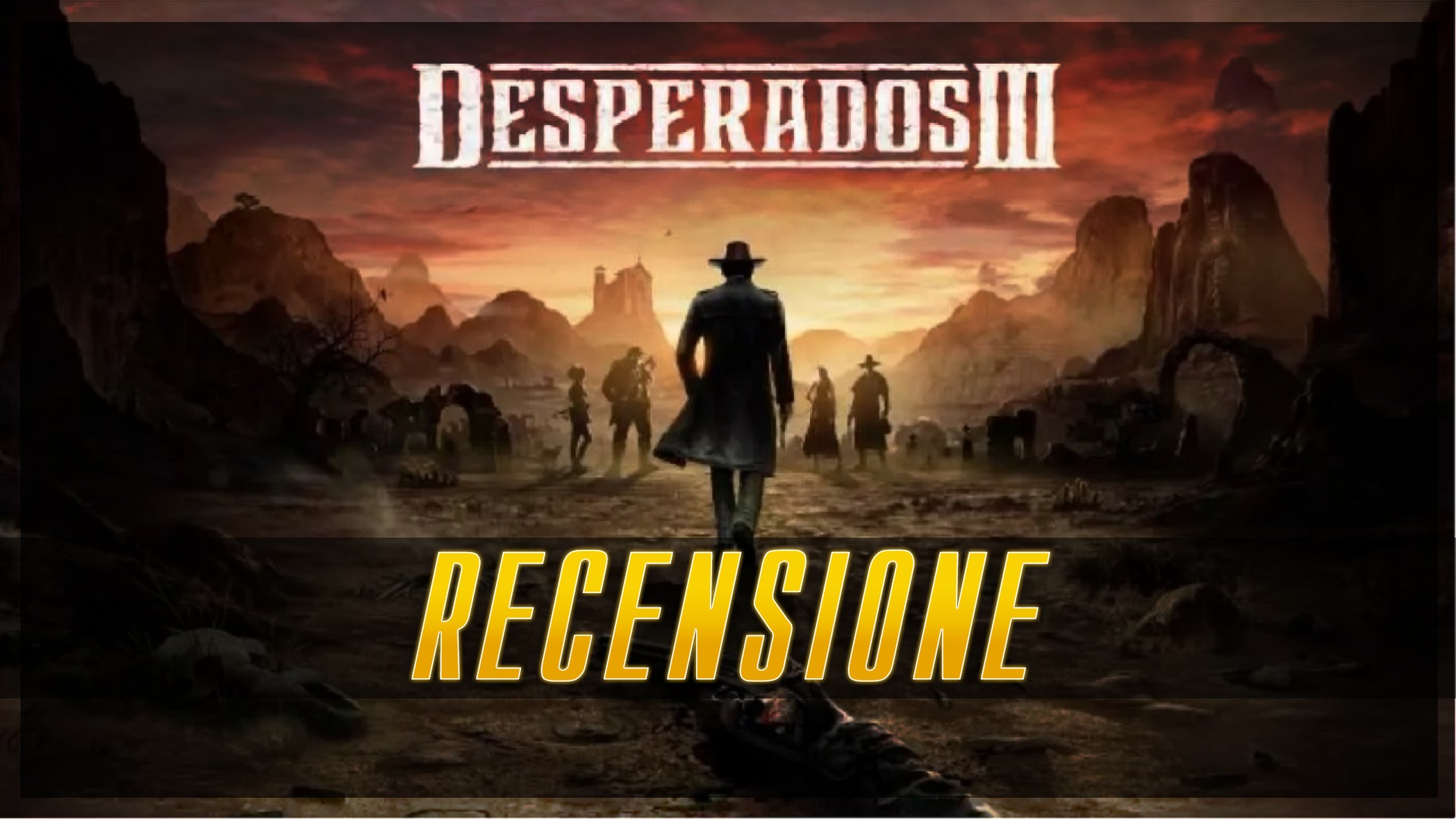 When I hear the name of Desperados I can't help thinking about a happy time in my life. At home, without any worries, playing on my very first desktop PC together with Age of Empires II and other titles whose name I don't remember well (apart from Guild Wars, but that is the beginning of a long love for a genre of which I won't talk about here). Initially developed by Spellbound Entertainment AG and published by Atari, then passed into the hands of THQ Nordic who entrusted its development to Mimimi Games, a German company with very few assets, one of which is Shadow Tactics: Blades of the Shogun. The software house was already practical with the genre and Desperados III reaps the fruits born from the development of the title mentioned above. You begin to hide among the fresh branches and think well, since the game does not forgive you anything.

I don't even remember when was the last time I played a title that dripped Far West from every pixel, clearly apart from Red Dead Redemption 2. The atmosphere is evident from the first seconds of the game, punctuated by the sounds of a slide guitar, verses of vultures and a gentle walk of the horses that bring the protagonists to the stage, wrapped in the red dust typical of the imaginary “West”. It is in this moment that we meet a very young man John Cooper, already protagonist of the first two chapters of the series, together with his father. The beginning of each chapter of the game is characterized by a mission that explains the whole background of Cooper and which also outlines the motivations on which the entire history of the game rests, namely the hunt for Devitt. The first mission serves as a short tutorial and then we move, physically and temporally, to Byers Pass, with a grown Cooper who wakes up on a train attacked by bandits. Already in the second mission we find another old acquaintance, the Doctor McCoy. In fact, three classic characters from the series return in this chapter. In addition to the aforementioned duo we also find Kate O'Hara along with two new original characters from Desperados III, Hector e Isabelle.

Each character has unique skills and statistics and you should learn well how to make them interact better, in order to be able to move forward more easily. For example, the giant Hector is the only one who can kill i coat enemies in one shot. In addition it also has a practical and huge bear trap, useful to put on the predefined path of the patrols, so stupid as not to see it and simply walk on it. Kate can pick pockets the enemies but cannot kill them, on the other hand it can to blind anyone with its perfume vials or masquerade so as to attract attention. Isabelle, character that I consider the most interesting of the five, is a swamp witch and uses voodoo magic to take possession of the body of enemies and use them at will. Or it can connect two people together and make them both suffer the same end: in practice they can be killed simultaneously. And these are just some of the skills available to the various characters necessary to get the better of the various types of enemies and extremely different situations in which Desperados III drags us: it is also possible to have night missions, therefore with reduced visual cones, or you have to stay watch out for the mud, on which footprints are left that alert the enemies who are therefore led to follow them. Of course, the possibility of lamerare the title is always around the corner. After all, just enter a house / room and wait for the enemies to enter one by one, so as to kill them without any problem, but they are almost subtleties and in any case it is not always a system applicable.

It is rare that all five of the protagonists are used together, often the missions include only a few of them and the others can be added later or, depending on the circumstances, not being there. So I repeat that it is absolutely essential to learn the synergies of the various skills and how to link them together: do not even think of loading with your head down as you will be overwhelmed in a few seconds. The patrols, if they no longer see the characters who were present shortly before, become alarmed and begin to search everywhere and it is not uncommon for you to be found even in the bushes. There bird's eye view also shows the visual cones of enemies and areas of effect of all the various objects and weapons, in order to better manage the situation. Everything happens in real time but you can make the various characters act at the same time through the mode Showdown, in which time stops and we can issue a series of orders that are all executed together with the press of a button. In Desperados III we spend more time in this mode than elsewhere, since the enemies are always numerous and finding ourselves in disadvantaged situations is the practice. In a certain sense, it almost reminded me of Hotline Miami, even though it is totally different: in order to be effective and without side effects, our actions must be planned and executed perfectly respecting the times given by the game. At the lowest difficulty some mistakes are allowed but already increasing it by one step, if you are not used to gender it simply becomes hell, and it's not uncommon to load and reload dozens of times a single section.

The characters are all dubbed in English, with Italian subtitles, and the graphics given by the wise use of Unity it is delicious and cared for. During the first few missions I had some difficulty managing the camera. In fact, it is given the possibility to rotate it totally: this gives really nice scenarios to the eye but, at the same time, it is possible to miss a few sections simply because there are enemies hidden by a house or a tree and that we had not noticed before. Fortunately, the title has a really perfect save and load system. Just press the touch pad of the PlayStation 4 controller to save and go to the pause menu and reload the last save is an instant operation. I noticed some microfreeze and during the uploads my PS4 Pro makes a noise never heard before, stuff that even after twelve hours of continuous play: a decidedly strange fact but that will probably be solved by some patch. If you are a fan of the genre, Desperados III is simply an essential purchase, which can keep you busy for at least thirty hours, not to mention the Baron's challenges. If you are totally ignorant about it, be careful about buying it: the game è difficult, frustrating and requires hours of planning and attempts to move forward, always tests the player by presenting different situations. In short, or you love or hate, there is no middle ground.

Dead Or Alive 6 postponed to March

Ghost Recon, the trailer for the new chapter will be released on May 9