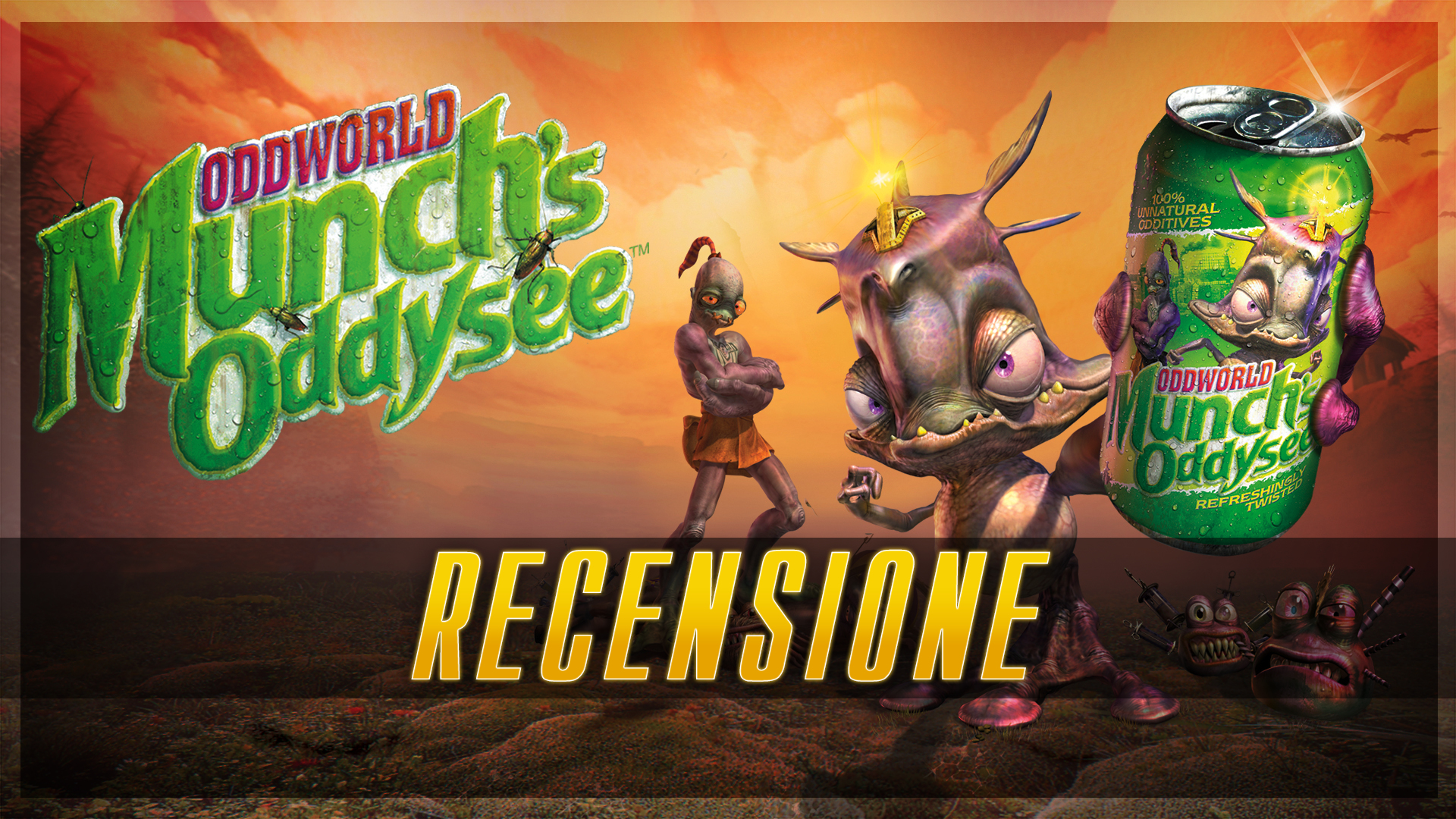 The Oddworld series represents something that today no longer finds any place in the gaming market. Over the past 20 years the sector has changed irreversibly. The increasing development costs basically have the entire portion of securities developed with resources not up to the most important productions was engulfed. Precisely in this "niche", which once represented the majority of the offer for us gamers and which today is occupied by indie games, the productions of the boys of Oddworld Inhabitants.

During the life cycle of the first PlayStation the first two titles starring the clumsy Abe were able to channel the attention of the gamers thanks to an atmosphere and a charisma at times never replicated later. The world in which users were dropped was able to convey oppression and involve thanks to themes, still current, such as villainous industrialization and capitalism understood as a real religion. The stroke of genius was then to add a comic veil in every movie and in every word pronounced by Abe and enemies. In short, if we wanted to launch into a comparison we could define Oddworld a videogame transposition of everything that made it famous and iconic Fantozzi in the Bel Paese. But in the 90s it was nice and easy to experiment. Everything really tasted new. Then came the big three-dimensional titles and more and less everyone tried to run after the trend. Sherry McKenna and Lorne Lanning will hold out until 2001. In this scenario Oddworld: Munch's Oddysee was born, initially as an exclusive PlayStation 2 and then became one of the launch titles of the first Xbox. 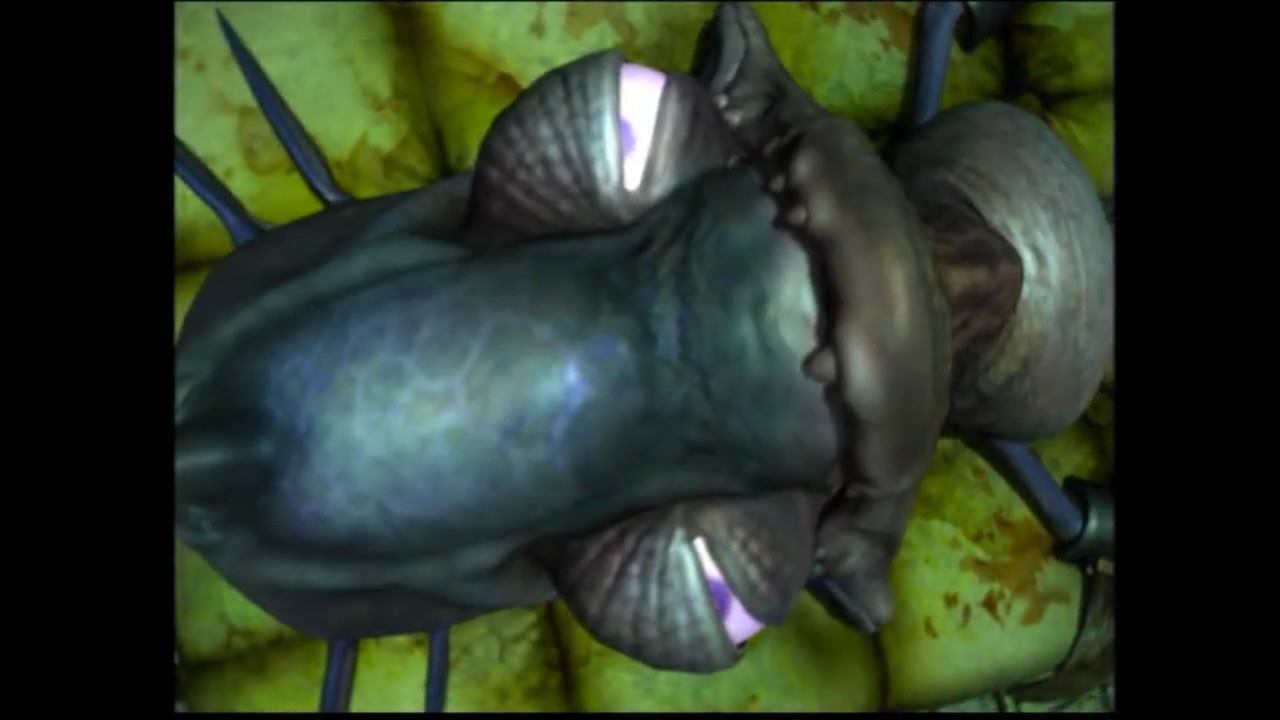 According to reports directly from the creators, Munch's Oddysee represents the second chapter of the brand. Abe's Exoddus is in fact considered as a bonus episode despite being directly connected to the game being reviewed today. The narrative incipit is basically the same as the previous iterations: an evil race on the planet Oddworld decides to hunt another with the aim of exploiting it or, in the worst case, to use it as the main ingredient of the brand new product line to the last cry.

This time the Mudokons will not be the object of the bad guys' wishes but i tripedons. These amphibious creatures are in fact sought after because of the delicacy of their eggs, as well as for compatibility with the lungs of the Glukkon, historically suffering from compulsive smoking. The protagonist, Munch, the last of his colony, is captured and forced to become a real radar for spheroids (another animal species subject to the Saddik's longing) thanks to the implementation of a sonar on his head. The path of the little Munch is therefore intertwined with that of Abe, who is commissioned by the oracle Mudokon to help the small amphibious creature, thus introducing the mechanics of the double protagonist (yes, Abe is also fully playable in this chapter) around the which will rotate almost all the environmental puzzles offered by the game. The two "heroes" they have access to personal skills and offer interactions with the game world, and with other species, completely different from each other. Abe can for example jump, hire his fellow men and take possession of some enemies while Munch can swim and request the help of the small and ferocious Spheroids mentioned above. 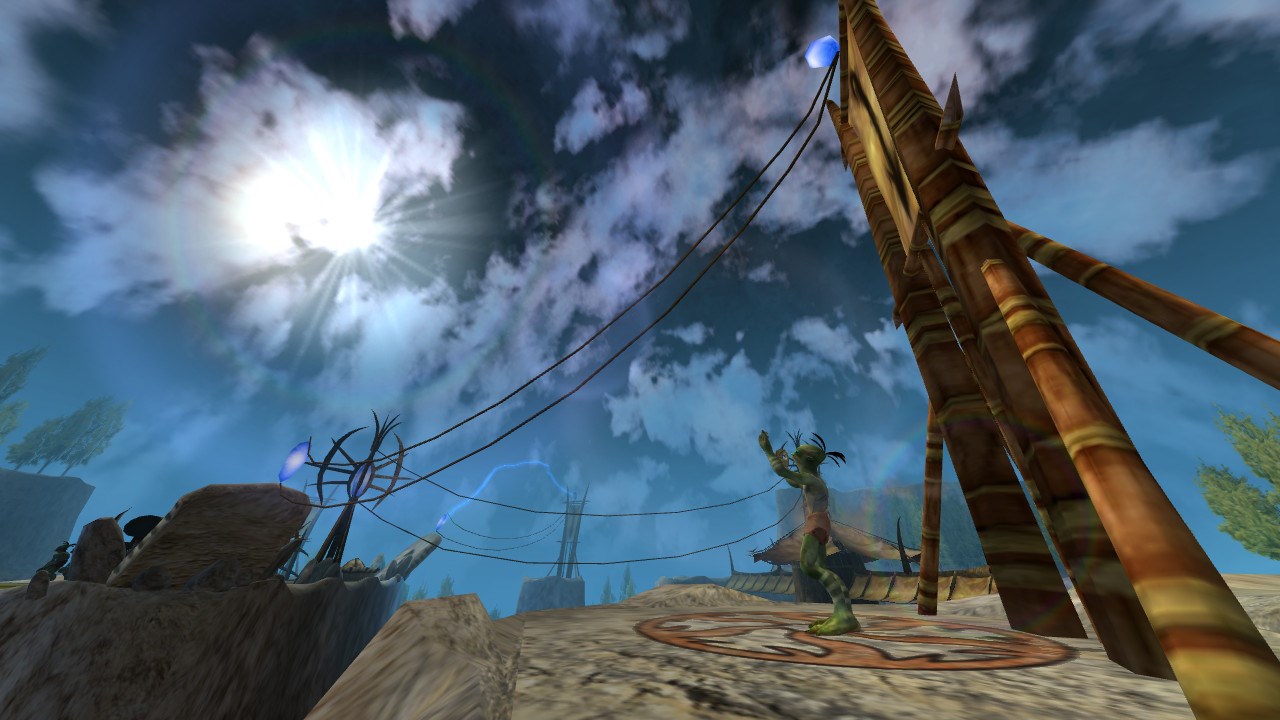 The game formula has therefore remained intact over the past 19 years. The version Nintendo Switch the title is a derivation of the improved edition already present on other platforms. Oddworld: Munch's Oddysee has in fact been re-proposed several times over the years, up to the present day on the small screens (perhaps too much in this case) of the hybrid license plate from Nintendo. The game shows a good resolution and an enjoyable fluidity that is almost always found on the 60 frames per second. However, the authors have never called this improved version "remastered", also because in fact it is not. Some game menus and a very good number of intermission videos have not been retouched in any way. In fact, almost always the films have double black side bands and a really bad video cleaning if compared with today's standards.

The audio sector is also the most critical: dirty and of low quality. - developers they claim to have improved the purely sonic aspects compared to the original version, but what they say is probably only partially true. Where the background music and sound effects are absolutely acceptable, the speech in the game and in the movies has problems with volume balance. In portable mode then some dialogues are decidedly unheard. If to this we add theabsence of any type of subtitle, the fat is in the fire. In order not to miss anything, the game is entirely in English, where the same distributed version, for one thing, on Steam, is completely localized in Italian. Absolutely inexplicable choice. 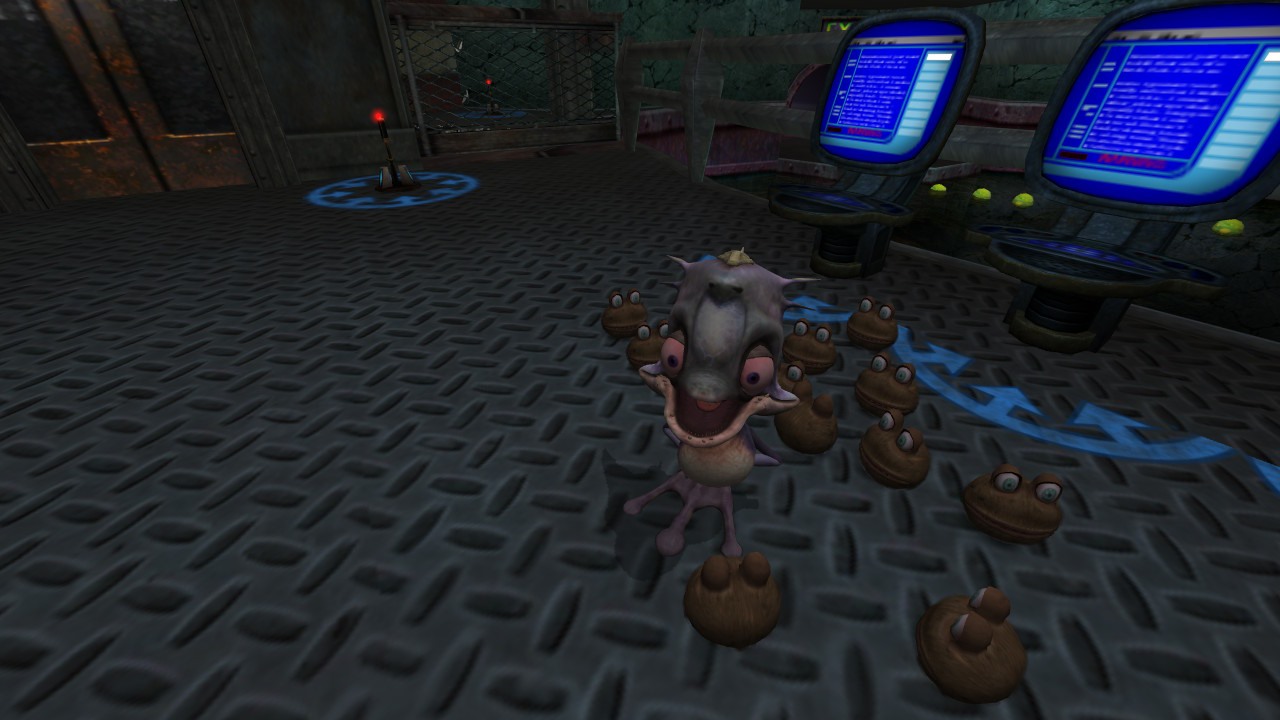 The title still manages to work knowing how to properly mix the environmental puzzles with the typically platform nature of the series. Unfortunately, abandoning the two dimensions led to the almost total set aside of the mechanics linked to the movement of our Mudokon friends. Mind you, Abe's likes are also in constant danger in this chapter and their survival (as well as that of the Spheroids) will involve a certain level of karma that will influence the final stages. The problem is that too often what was the mother mechanic of the previous episodes this time translates into carrying out certain actions without any importance placed in the timing of their performance. The clear example is the overcoming of a minefield: just order the NPCs not to move and then literally bring them one by one on the other side of the obstacle. This does absolutely no justice to the depth of gameplay that Oddworld managed to offer in the past. As said before, however, the proposed puzzles work, they know how to amuse (net of a few repetitions) and offer the right level of challenge. Of course, platforming is not precise, but it must be said that at the turn of the 2000s there were very few titles that could offer a decent movement and jumping system in a three-dimensional game world.

This chapter of Oddworld offers nothing new to today's players. In the last twenty years the productions able to do better across the board are innumerable, yet Munch's Oddysee is able to score. This ability to stand out is certainly to be found in the appeal of the world created by the developers, by the design of the characters who inhabit it and by the comically creepy stories that are told in it. The charisma of the series manages to emerge despite the limitations of the time have placed a limit on the graphic detail making the settings a little sparse, which still manage to convey that feeling of surreal to the players even in the absence of a profound review of the behavior in porting issue. 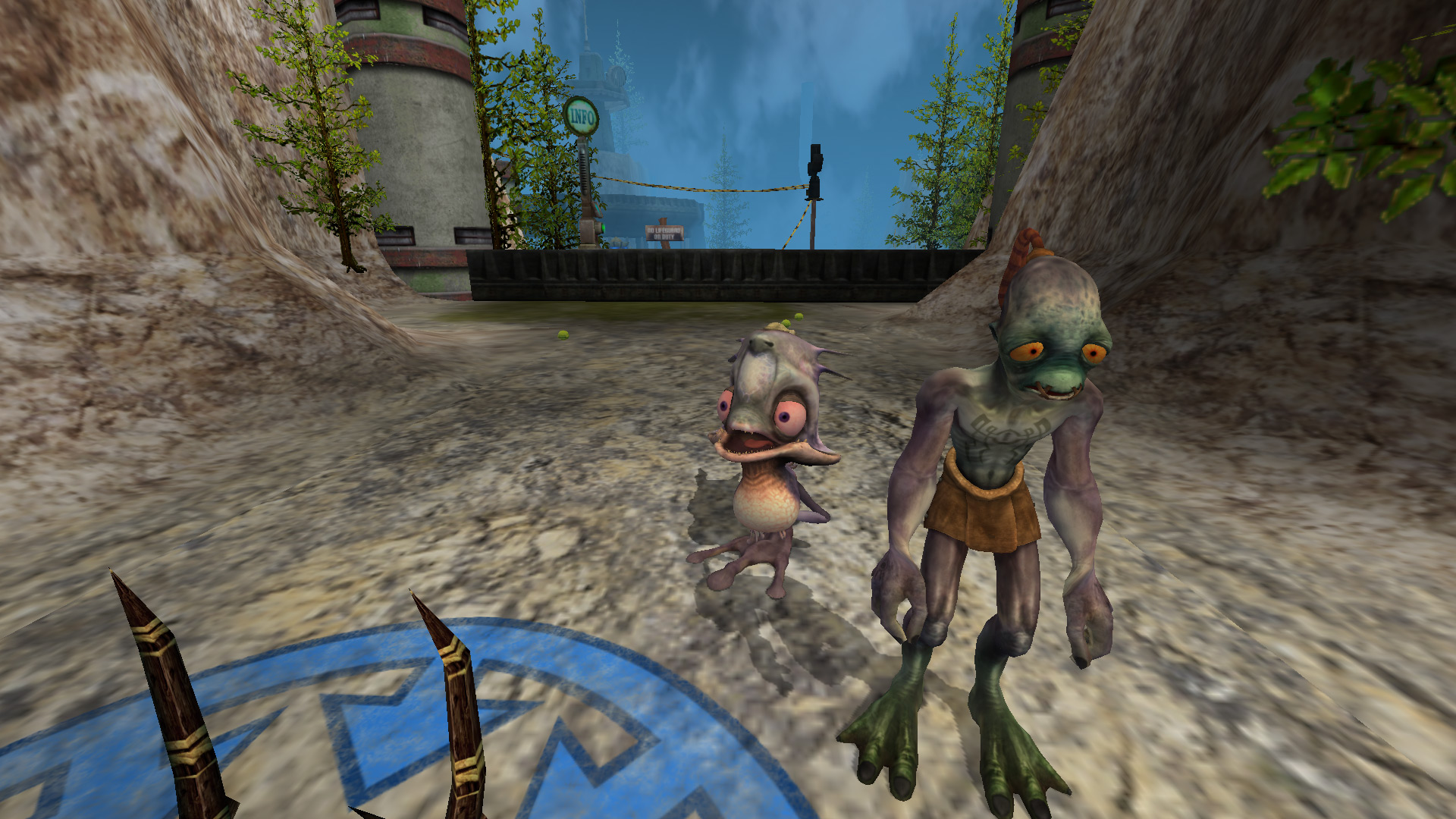 Taking control of Abe (let's face it, the star is always him; I don't want Munch) is an experience that every player should try. Also in this chapter. Even in 2020. The game does not excel in practically anything. The quality of the "improved version" does not live up to most remasteries. Yet Oddworld: Munch's Oddysee has character, and has something to sell.

Therefore, having ascertained that the title remains absolutely enjoyable even today, the second question to which the review must answer remains: is the Nintendo Switch version recommended? Never before has there been only one answer: it depends. From a merely technical and content point of view, no, it is not. The low quality audio greatly affects the experience, especially in portable mode, and the lack of localization is absolutely unacceptable. But if you are avid supporters of philosophy "Laptop is better" you shouldn't be thinking about it too much.

Updated: Following the response received from the reviews, the developers made the decision to work on an update regarding the location of the title. An update will therefore be distributed in the coming days with the addition of French, German, Spanish and Italian among the selectable languages.

Yooka-Laylee and the Impossible Lair - Review