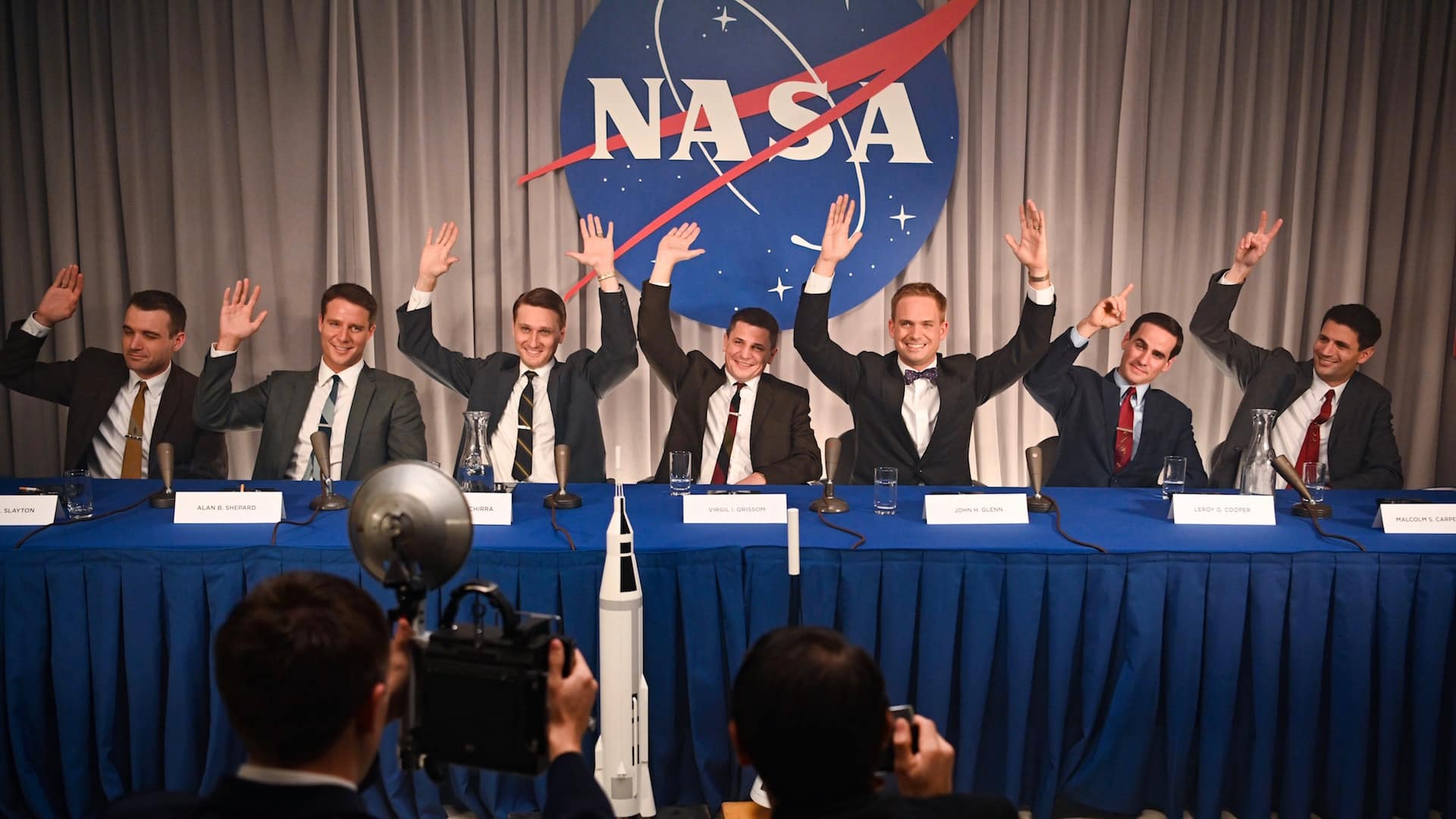 This series composed of eight episodes looks at what would become the first "reality show" in US history, with the stories of ambitious astronauts who, together with their families, suddenly become real celebrities, finding themselves in the middle of a competition that could kill them or make them immortal.

The two men at the center of the story are Major John Glenn, esteemed test pilot and devoted father of the family with strong principles, played by Patrick J. Adams (Suits), and Lieutenant Commander Alan Shepard, one of the best test pilots in the history of the United States Navy, played by Jake McDorman (What We Do in the Shadows, Lady Bird).

In 1959, at the height of the Cold War, the Soviet Union dominated the space race. To counter the spread of a feeling of fear and decline that has hit the American nation, the US government conceives NASA's Mercury Project, starting a space race against the Soviets and instantly transforming some of the army's most successful test pilots in real celebrities. These individuals, called Mercury Seven, are transformed into heroes even before they have done something heroic. The nation's best engineers calculate that it will take several decades to get into space. But they are given only two years to do it.

Other Mercury Seven members include Lieutenant Gordon Cooper, played by Colin O'Donoghue (Once upon a time, Carrie Pilby, The rite), the youngest of the seven, who was chosen to everyone's surprise; Wally Schirra, played by Aaron Staton (Mad Men, Narcos: Mexico, Castle Rock), a competitive driver with a passion for jokes; Scott Carpenter, played by James Lafferty (The Haunting of Hill House, Small town crime), endowed with a strong spirituality and nicknamed "The Poet" by the other astronauts; Deke Slayton, played by Micah Stock (Brittany Non Stops More, Escape at Dannemora), taciturn but incredibly intelligent pilot and engineer; and Gus Grissom, played by Michael Trotter (Underground, The Evening Hour), an extremely serious test pilot who will become the second man to go into space.

The astronauts' strengths are matched only by their shortcomings. As men succumb to the temptations around them, Project Mercury risks failure. At the heart of this historical drama full of deeply human characters are two astronauts who become icons - Glenn and Shepard - and compete with each other to become the first man to go into space. The whole program is jeopardized by their intense rivalry.

The series also follows NASA engineers, who struggle against time under increasing pressure from Washington and public opinion. We will discover the mechanisms of a propaganda machine capable of creating myths, headed by the NASA public relations department and assisted by the editors and editors of LIFE Magazine.

«It is a true story that speaks of scientific innovation and human perseverance. It couldn't be more relevant, ”says Courteney Monroe, president, National Geographic Global Television Networks. - «The National Geographic series The Right Stuff it is an edifying story centered on exploration, ambition, determination and resilience, which reminds us that humans can do extraordinary things when they are united by a common purpose. This series offers an unprecedented look at the heroic but imperfect Mercury Seven astronauts and we are thrilled that he has found a perfect home on Disney + ».

"As viewers around the world look to Disney + for inspiration and optimism, we believe the heroism of the Mercury Seven can highlight the tenacity of the human spirit and inspire a new generation to reach for the stars," said Ricky Strauss. , president, Content & Marketing, Disney +. “The amazing team of National Geographic, Warner Horizon Scripted Television and Appian Way have crafted an interesting and entertaining story. We are honored to have it on the platform around the world as the first original series created by National Geographic for Disney + ».

"Tom Wolfe's book has brilliantly captured a fundamental period in American history that has deeply affected all of us in Appian Way and National Geographic," says Davisson. «Disney + is the perfect partner to tell this story, which talks about what is necessary to do something extraordinary, also showing the sacrifices faced in the name of that ambition».

Lafferty adds: «The Right Stuff it evokes the wonder and amazement of the moment in which we crossed the borders of our home for the first time to venture into the unknown. This series, however, not only tells about our historical enterprises, but also who we are today. In a period in which the world is forced to face significant challenges, this story reminds us that what seems impossible today can become the triumph of tomorrow ».

The rest of the cast includes Nora Zehetner (Brick - Mortal Dose, Creative Control) in the role of Annie Glenn, wife of John Glenn and his life partner since childhood, suffering from a speech disorder that sometimes makes it difficult for her to communicate; Eloise Mumford (the Fifty Shades) in the role of Trudy Cooper, wife of Gordon Cooper and in turn an established pilot, whose stormy marriage with Gordon causes several conflicts; and Shannon Lucio (Prison break, True Blood) in the role of Louise Shepard, Alan Shepard's devoted wife who has suffered greatly.

Patrick Fischler (Twin Peaks, Mad Men) plays Bob Gilruth, a secretive missile engineer and colleague of the cheeky Chris Kraft, played by Eric Ladin (American Sniper). They are key members of NASA's Space Task group, commissioned by President Dwight Eisenhower to send a man into space in such a short time as to go beyond the limits of what is possible. They have to race against time while they are under increasing pressure from Washington and public opinion.

As the Mercury Seven astronauts are thrown into the spotlight, NASA's public relations department strives to paint the perfect picture, aided by the editors and editors of LIFE Magazine. Danny Strong (Billions) plays John "Shorty" Powers, NASA's ubiquitous public affairs chief, who constantly accompanies astronauts on pleasantly-filled visits to factories and substandard food charity dinners designed to stimulate public enthusiasm and secure funding for the space race from Congress. Josh Cooke (Grace and Frankie, The Fantastic Lady Maisel) plays Loudon Wainwright Jr., the most successful LIFE Magazine reporter, who is in charge of writing the biographies of all seven astronauts and can better understand what is really happening.

Leonardo DiCaprio and Jennifer Davisson are the executive producers, together with Mark Lafferty (Castle Rock, H), which is also a showrunner. Chris Long (The Americans, The Mentalist) is the director and executive producer of the first episode. Also Will Staples (Animals, Shooter) and Howard Korder (Boardwalk Empire - The Empire of Crime) are executive producers. Oscar® winner Thelma Schoonmaker (Wild bull, Those good guys, The Departed) and the Emmy® winner Danny Strong (Empire, the films of Hunger Games, Game Change) are the consulting producers. Michael Hampton ran the project on Appian Way and is the co-producer.

Fortnite Chapter 3 is the first title to implement the Unreal Engine ...

Piermatteo Bruno - December 8 2021
If you were wondering why the latest update for Fortnite was so much heavier than the previous ones, know that not all those GigaBytes have been ...
News

Call of Duty Warzone - Invasive Anti-Cheat for PCs is here

Piermatteo Bruno - December 8 2021
The team behind Ricochet Anti-Cheat, the scam-sneaky software implemented within the PC version of Call of Duty Warzone and Call of Duty Vanguard, ...

The Book of Boba Fett, the new series will arrive on Disney + ...