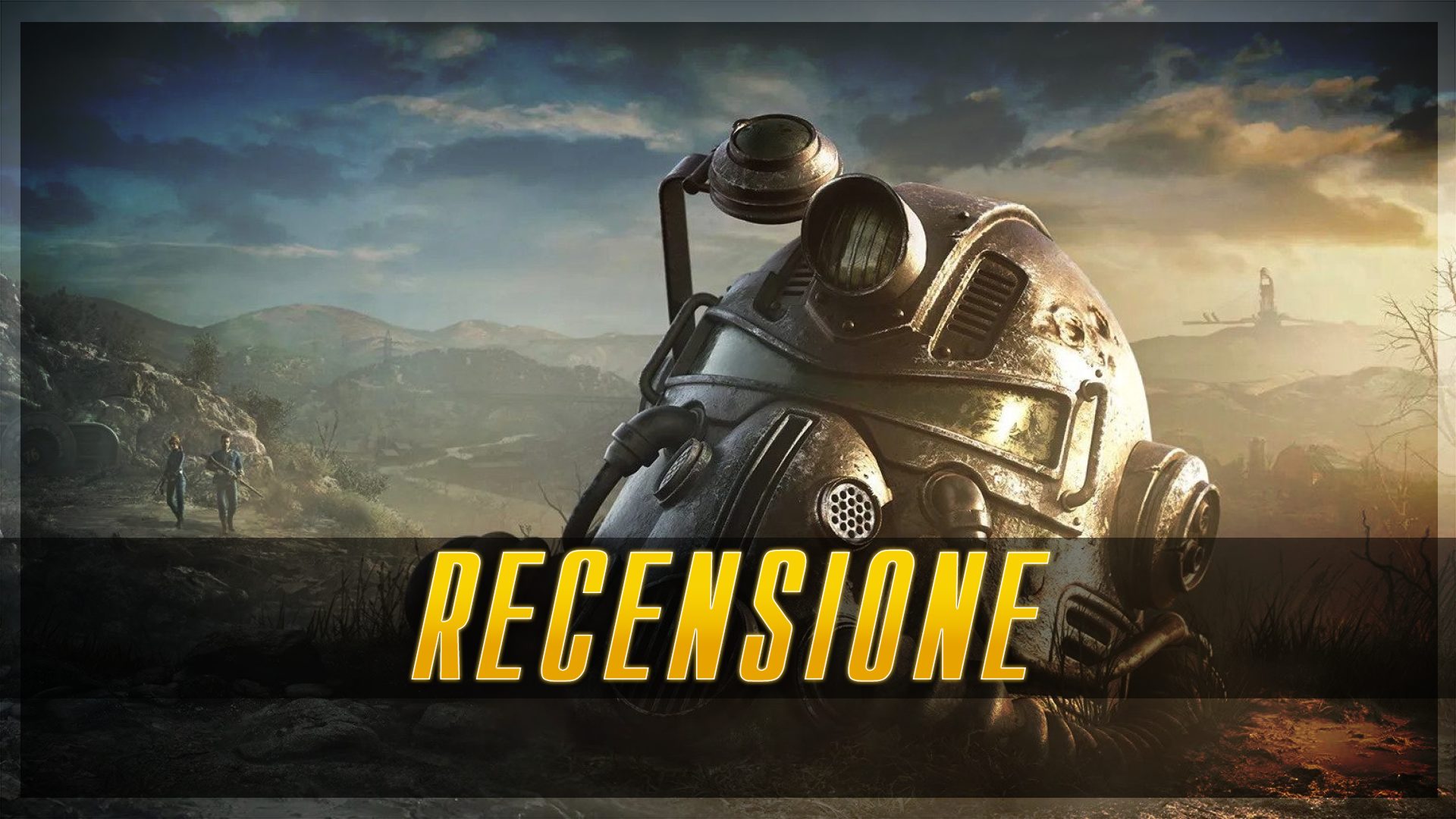 Adapting a video game is never easy, especially one like Fallout , in which the player agency and exploration without restrictions are the pillars on which everything rests. Fortunately, video games have inspired in recent years less Uwe Boll movies and more board gamessome excellent, some a little less. Placing Fallout: The Board Game on this scale is not an easy task, however. 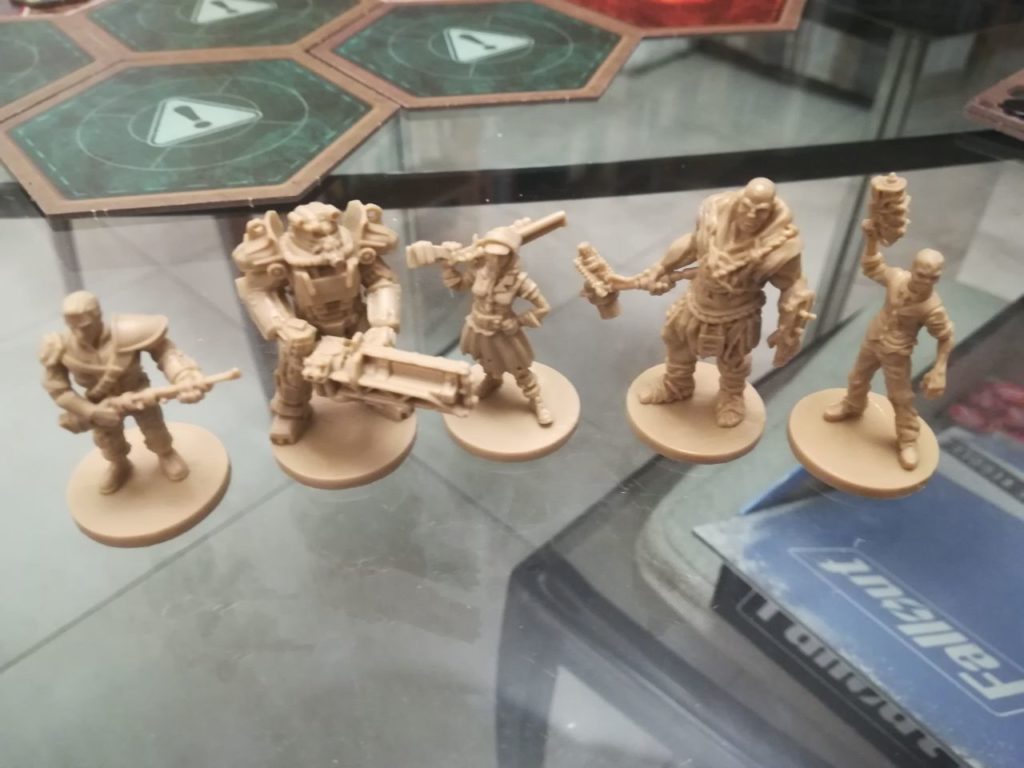 The presentation is excellent, nothing less is expected from now Fantasy Flight Games. The components are all well-made, in particular the 5 miniatures included, very detailed and perfect for painting. All the illustrations on the cards follow the graphic style of Fallout 4, characters and monsters seem to come straight out of the video game, the modular map tiles are also pleasant and the assembling planks are fantastic, which they really give the impression of having a cardboard Pip Boy on the arm.
The regulation, as usual for FFG, is divided into two parts: an introductory one to start playing "quickly", and an index with all the rules to be consulted once the game has started. The system itself is not bad but the execution is not entirely successful, and clarifying some ambiguities will take some time spent leafing through the two manuals in search of some quibbling. Quite inexplicable the absence of summary cards for the players, which would have helped a lot in the initial stages. The time required for setup is tolerable even for less experienced players. 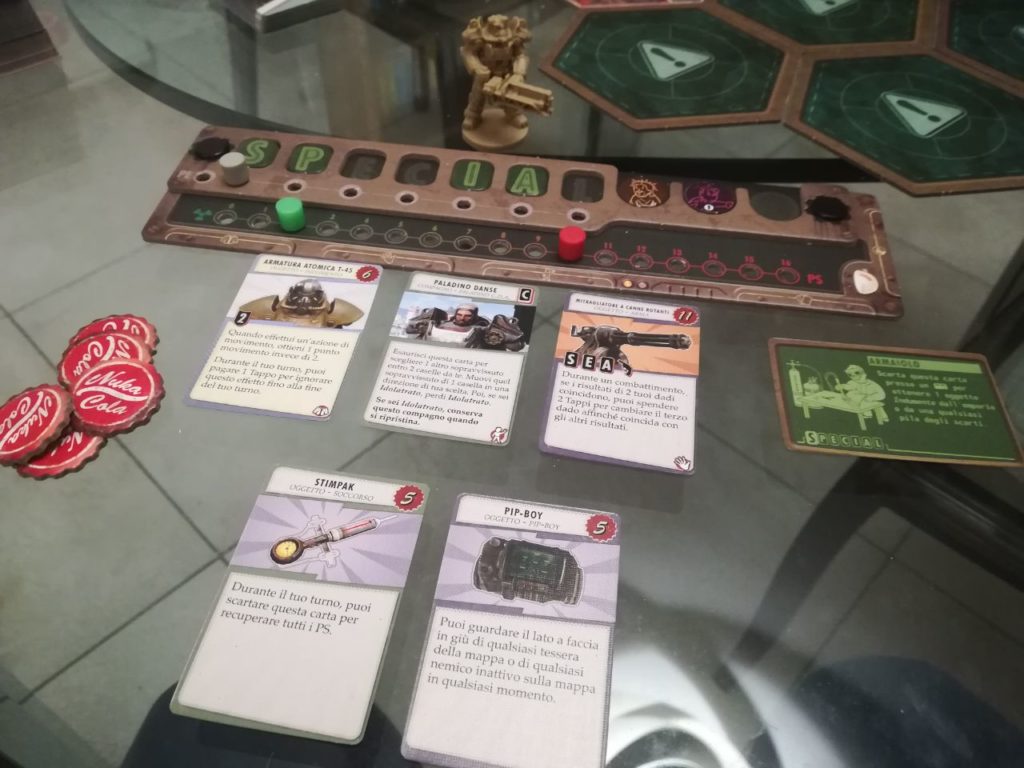 The basic mechanics are quite similar to what we saw in Arkham Horror second edition and other adventure games from the same publisher: you choose a scenario card that describes the map and the two factions fighting each other in that setting, the players move in turn in a big world to explore in search of companions, equipment, resources and more, facing various tests and fights generated by encounter cards. The main differences in Fallout: The Board Game are the modular and partially random map, non-automatic encounters that count as an action of the turn, greater cohesion in the narrative structure of the encounters themselves and above all the competition: the aim of the game is in fact that of reaching a certain level of influence first, which varies according to the number of players, but which in the vast majority of cases will be linked to the success of one of the two factions compared to the other: if however one of these should reach the maximum influence before someone managed to win then everyone loses. 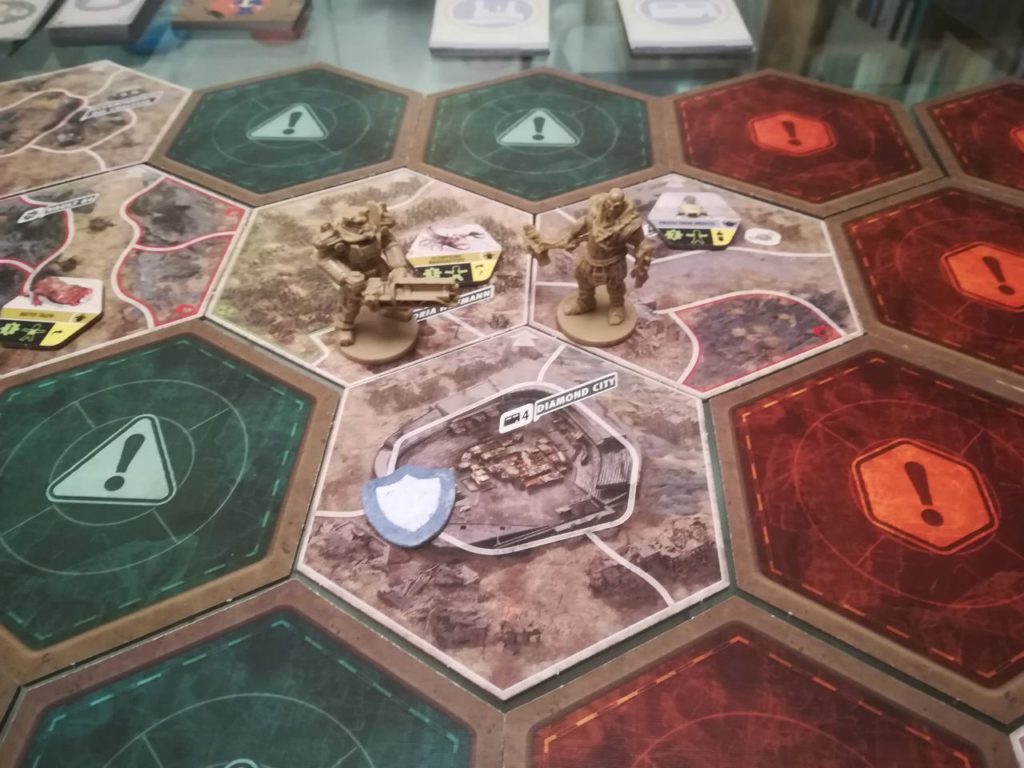 The rules are not too complex but there are many, during your turn there are numerous actions available and keeping track of everything at the beginning will be impossible, but within a few games you will become familiar with all the mechanics present. The general feeling is really that of playing Fallout, at least in some of its forms, the Pip Boy-style dashboard is incredibly immersive, like the deck of encounters, which certainly represents the highest point of the whole game. To solve tests and fights, the same three custom dice are rolled, and no effect of the game changes this number, but it only provides extra rerolls based on the correspondence between the abilities possessed by the character and those required by the test. And here it starts to crunch a bit, because limiting the number of dice to three strongly invalidates the sense of progression during the game, when even leveling up and doing a power build will give a maximum of a few dozen more raises. The system is not particularly satisfying when passing a difficult test, and can be quite frustrating when a simple one fails after having re-rolled the dice 4 times. 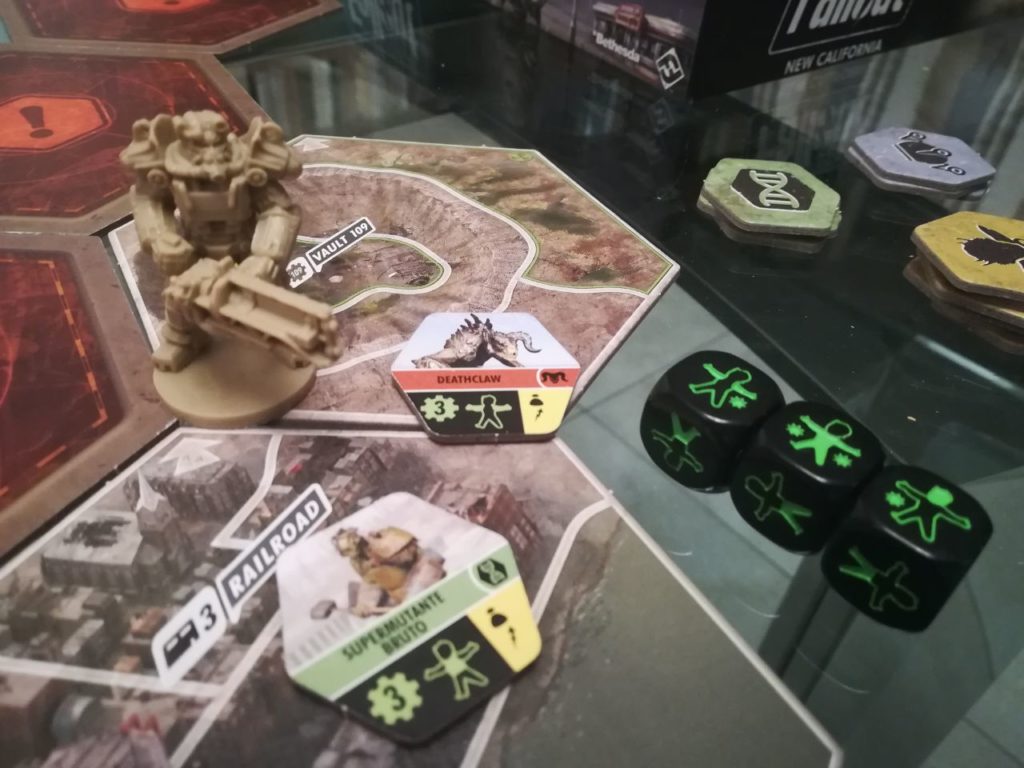 The fights leave a similar feeling: Fallout: The Board Game offers a sort of transposition of the SPAV typical of the new course video games, but which is actually purely cosmetic and only requires a tot. number of useful results on a D6 to kill enemies. Another one sore point is represented by the few initial meetings (those by default in every game), which will become bigger as the main story or the secondary missions go on, but which will inevitably end up being recycled in every game, so much so that you will get to know every possible outcome of a fortnight of cards compared to almost 200 in the game. The same holds true for enemies and equipment, certain categories of monsters will come up again and again (not that the video game is much more varied, to be honest), and we will soon be scrambling for stronger weapons. Another choice that in my opinion turns out to be more harmful than anything else is the competitive nature of the game, which inevitably leads to the unfavorable aspect of roleplay in decisions to be taken in favor of brutal and soulless optimization. Moreover, it is easy to completely lose control of events, especially in games with 3-4 players: between one turn and the other the state of the game can change radically, the main missions may have taken unwanted folds on which you have not had no say, and even if it is difficult to be formally eliminated from the game it is easy to no longer have any chance of returning to the race. Part of these problems can be circumvented by playing solo, a mode that requires very slight adjustments without changing the central elements of the gameplay, but at that point it will be inevitable to ask why you are not playing Fallout 4 directly. 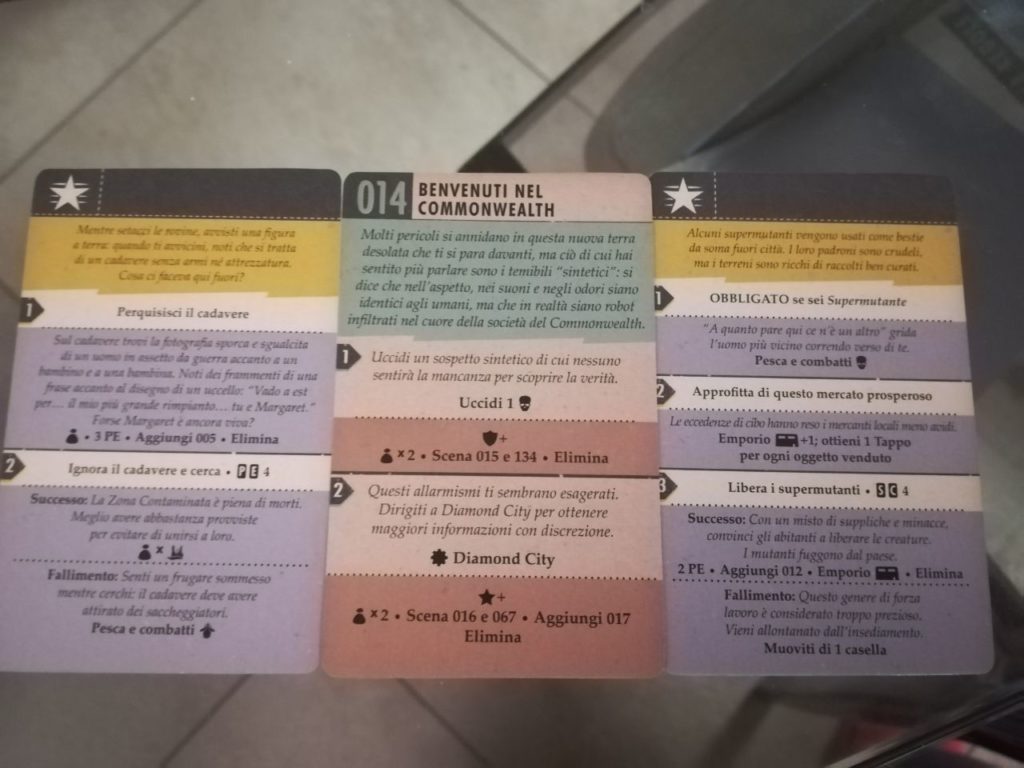 Fallout: The Board Game has a solid core, with many valid ideas, in particular the more structured approach in the narrative solves one of the main problems of games like Eldritch Horror: the omnipresent risk of cognitive dissonance when an old man to thank you for helping him bring home the shopping gives you the Necronomicon. But at the same time a series of defects and a certain lack of variety mean that the final result is not worth the sum of its parts. Here, however, comes into play Fallout: New California, recently localized expansion that introduces new encounters, characters, objects and enemies; filling many gaps in the base game, and also introducing a cooperative mode, which was needed. In this scenario the players will be united against the Enclave, and will try to thwart its dominance over New California. Having to buy an expansion to express the full potential of a game is not the best, especially since the basic set already costs 50 euros, but if you love Fallout and adventure board games I think it's worth it, the game is pleasant and with a few tweaks it can become much more. New California is definitely a step in the right direction.

Fortnite, the themed Jenga is coming