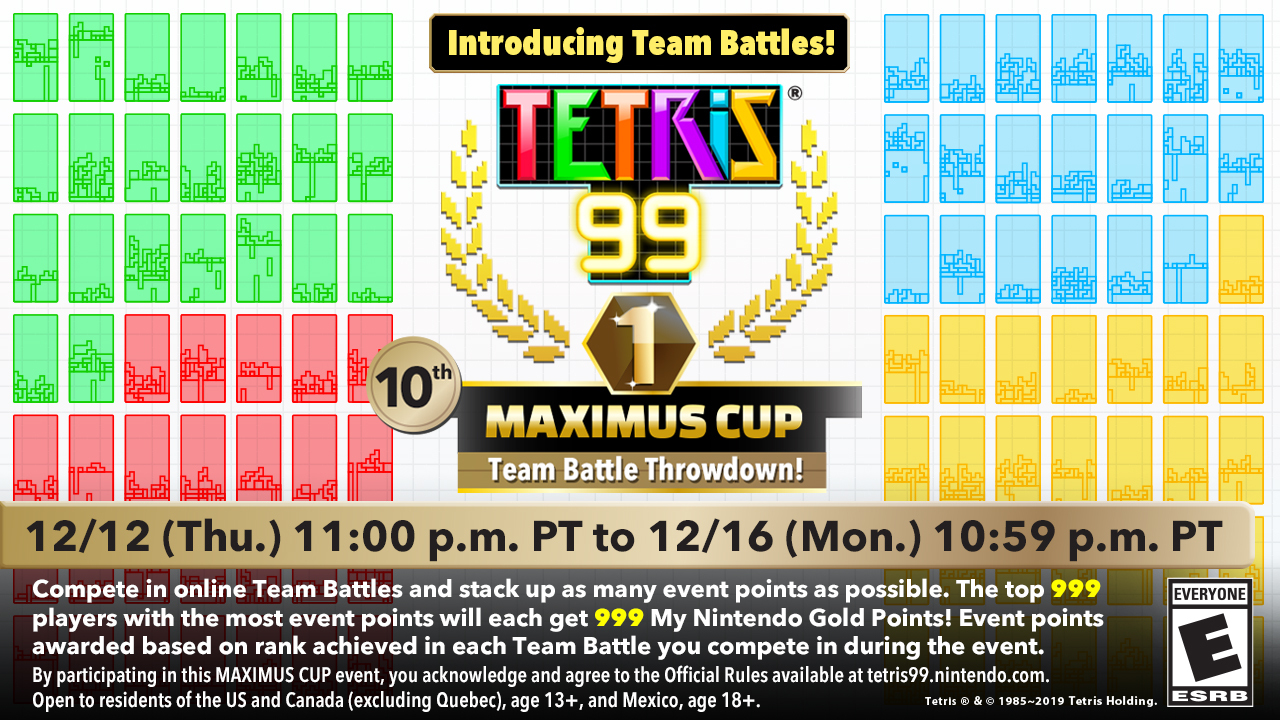 REDMOND, Wash .– (BUSINESS WIRE) –The fierce and frenzied 99-person multiplayer matches of the Tetris® 99 game just got even more intense with the addition of Team Battle Mode. Typically, it's every tenacious Tetrimino twirler for themselves, but now Team Battle Mode allows a group of friends and competitors to play together as a squad. And with the addition of a new password-based matchmaking feature, it's easy to find your friends for matches in the Tetris 99 and Team Battle modes.

In Team Battle Mode, players choose their favorite of four teams at the start of each game. Some teams may end up with more members, but smaller teams receive boosts when attacking, adding an element to each match. As players get eliminated through the course of battle, the final team standing with at least one player remaining wins. And even better, all members of the winning team can share in the victory! Players who are KO'd early in the game will go into spectator mode and can send "Likes" to cheer on their teammates. Players will have to stick to their XP points. Or, if Team Battle is the active mode for a MAXIMUS CUP event, stay for their event points.

Additional features include new button configuration options and new user emblems, as well as the option to redeem 30 in-game tickets for some of the elusive The following in-game, Special Themes, which were inspired by games and favorite franchises, are now available: Tetris® from the original Game Boy™ games, Splatoon™, Fire Emblem™: Three Houses and Super Kirby Clash™.

The Team Battle Mode also brings a new twist to the Tetris 99 10th MAXIMUS CUP, which runs from 11 pm PT on Dec. 12 to 10: 59 pm PT on Dec. 16. The Tetris 99 10th MAXIMUS CUP will be available to all Nintendo Switch Online members * and will take full advantage of the new Team Battle Mode. 999 Gold Points ** that can be used to help purchase games in Nintendo eShop.

A physical version of Tetris 99 is also available. For a suggested retail price of $ 29.99, the physical version includes the game, all DLC and a 12-Month Nintendo Switch Online Individual Membership. ***

*** Included Nintendo Switch Online membership will auto-renew at the end of 12 months.

NO PURCHASE NECESSARY. Void where prohibited. Open to legal residents of the US and Canada (excluding Quebec) who are ages 13 + and Mexico who are 18 + and have access to Nintendo Switch system, Tetris® 99 game, Internet access and Nintendo Switch Online membership. Contest begins 11: 00 PM PT on 12 / 12 / 19 and ends at 10: 59 PM PT on 12 / 16 / 19. To participate, you must play Team Battle mode in the Tetris® 99 game during the Contest Period. There will be 999 winners, selected based on who accumulates the most event points during the Contest Period. You will be given the opportunity to change teams first of the battle. If you are knocked out during the battle, you will remain as a spectator. If you exit the battle after being knocked out, event points will not be awarded. Each winner will receive 999 My Nintendo Gold Points (ARV for prize $ 10 US). Skill of participating players determinines the winners. See Official Rules for details and restrictions. Tetris99.nintendo.com/rules. Sponsor: Nintendo of America Inc., 4600 150th Ave NE, Redmond, WA 98052.