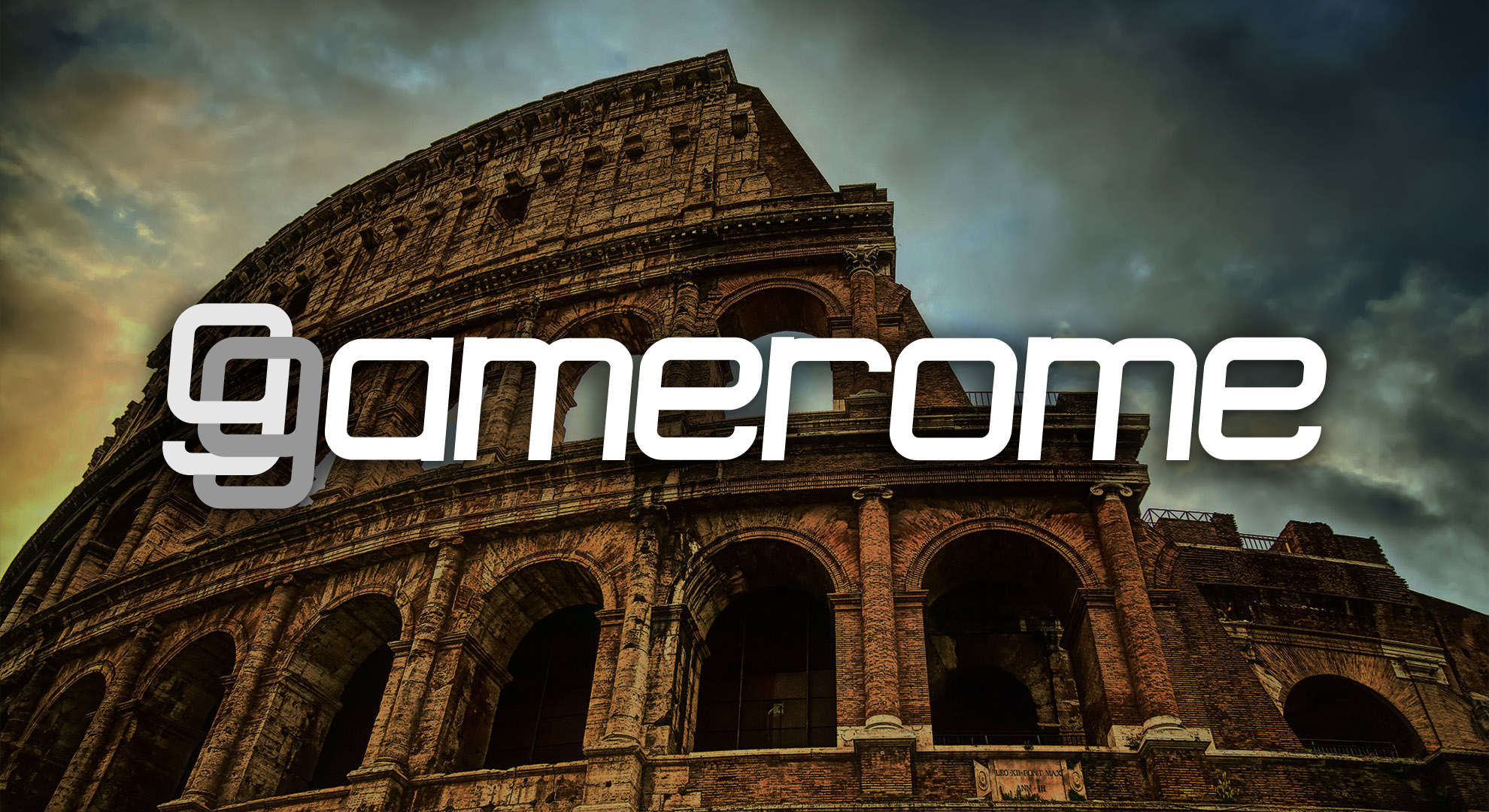 The Gamerome took place on Thursday 14 and Friday 15 November, a trade show dedicated in particular to developers and "workers". We are not talking about a consumer event, but rather a series of targeted and useful conferences for those who are already engaged (or would like to be) in the difficult task of conceiving, developing and selling a video game. Precisely for this reason in our recap, divided into two parts (click here for the first part), you will only find those meetings and information that I believe will be of interest to a wider audience.
No more talk, let's move on to what we've seen (and heard).

If the day before Hans Ippisch, president of Intellivision Europe, had explained to us the vision of the company, this time the meeting was aimed at touching, for the first time and exclusively, the Intellivision Amico. Unfortunately, due to misunderstanding, the hands-on was not possible. We could still see the console and some of the titles (of which we can not say anything) in development. At the moment, the games that Intellivision is working on are 17. The idea is to create a program that allows users to have a new game every week. In addition, of course, to make the console available for launch with various titles already included.
There will be no pay to win games, there will be no microtransactions or subscriptions of any kind. Once again, Hans Ippisch was clear: only games, just local entertainment. As it used to be.
"We could have implemented other features like Netflix, for example, but it would have become difficult for kids to manage, perhaps. We want the Friend to be used to play, full stop "said Ippisch.
As already written in the first recap, I don't know how this "old-fashioned" approach can bear fruit. I wish, however, a sincere good luck to the whole team! 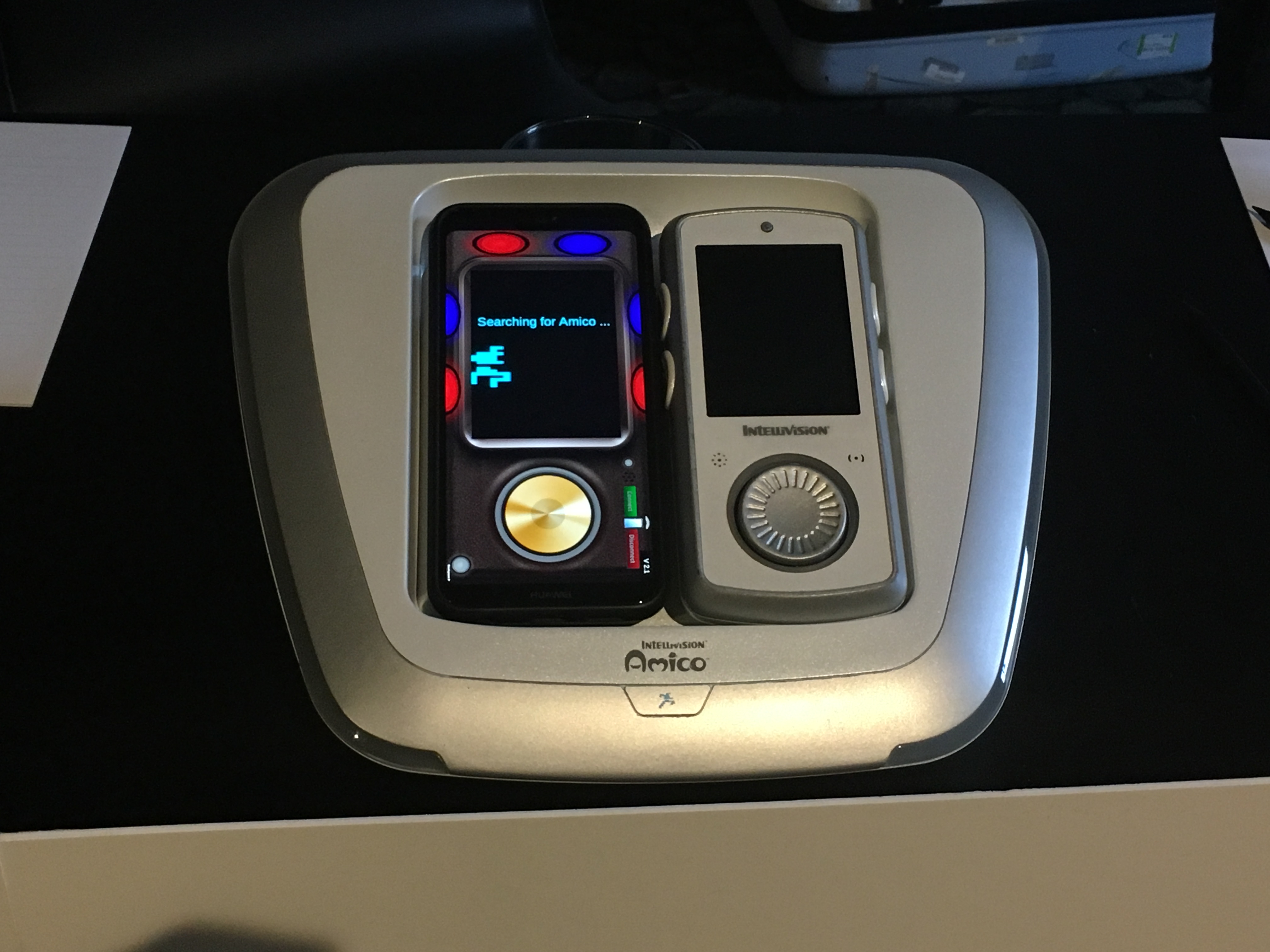 After Ian Livingstone, Gamerome gives us the opportunity to spend an hour with another undisputed legend in our sector: Don Daglow!
Class 1953, Don Daglow is one of the absolute pioneers of this sector. If Ian Livingstone entered the gaming world only later, Don Daglow was born and grew up with video games, starting as a programmer of the very first text-only games (years' 70) for devices like the Apple II. Over the years 80 is hired by Mattel as a programmer for Intellivision, where he begins to place his first milestones: in fact, he is the first video game to use multiple camera shots and angles (World Series Baseball, 1983), as well as his is the first RTS in history video games (Utopia, 1981). He is then hired by the EA, designing the first two sports titles (World Tour Golf, Earl Weaver Baseball, 1984-87).
Years pass and Don decides to start his own business founded Stormfront Studios. And it is precisely with the Stormfront Studios that Don reaches the final consecration.
In the public 1991 Neverwinter Nights, the first MMORPG with a graphical interface in history. In the 1993 it is instead the turn of Stronghold, the first RTS with 3D graphics.
However, it is on Neverwinter Nights that he decides to dwell, telling us anecdotes and opinions relating to that period. For example, his passion for D&D was fundamental. If there is a common divider between all the pioneers and legends of our industry, that common divider (I'm out of balance) I really think it could be Dungeons & Dragons. Even Ian Livingstone could not avoid mentioning him. Who knows how many less video games we would have had if D&D had never existed… but let's get back to us. The starting point was therefore the world (in particular the Forgotten Realms) of D&D. However, it was difficult to choose the city from which to start: many had already been used, such as Waterdeep for example, and much had already been said about the setting, the characters, the history of the territory. In these cases the narrative would have been very limited and "forced". So Don was looking for a city that already existed but was not overly thorough: here is how Neverwinter managed to become (perhaps) even more famous than Waterdeep. 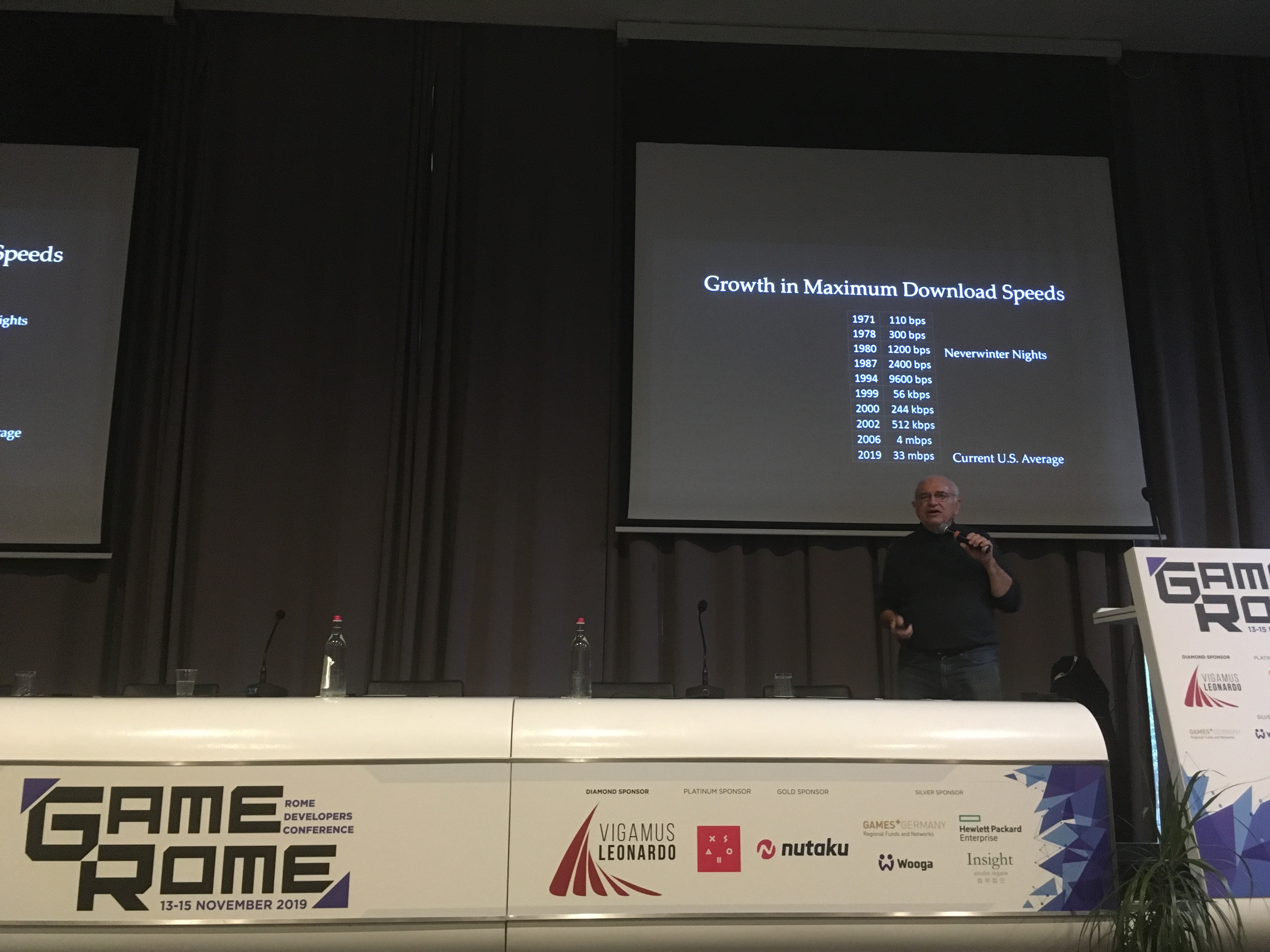 Don then asked himself the question "why did we succeed where others failed?" And, shortly after, the answer was given. Answer that probably contains all the best advice given during the conference.
First of all he stressed the importance of having adapted the already existing Gold Box graphic engine (with which he was already familiar) without having created another one from scratch. Hence the first warning towards those who insist on starting from scratch with the excuse of wanting to have "everything under control": "Control is nothing if the risk is too high", thus inviting the programmers to use graphic and software engines already tested and "safe".
The other pearl, certainly more "conceptual" and philosophical, we find it in the approach with which Don says he has faced new technologies and sudden changes:
"In the face of new environments we have always surrendered, we have never tried to colonize them. Old technologies cannot be applied to new technologies, but must be able to extrapolate all possible new experiences ", this time inviting programmers to focus on both mobile and VR.
Don finally "challenged" all the programmers and designers present in the room with a clear and direct question: "What lesson would you like to share in this room with video game developers in the 2049?"
The meeting with Don Daglow was, without a shadow of a doubt, the best in the whole Gamerome from all points of view. Innovator, undisputed genius and, above all, great communicator. Standing ovation. 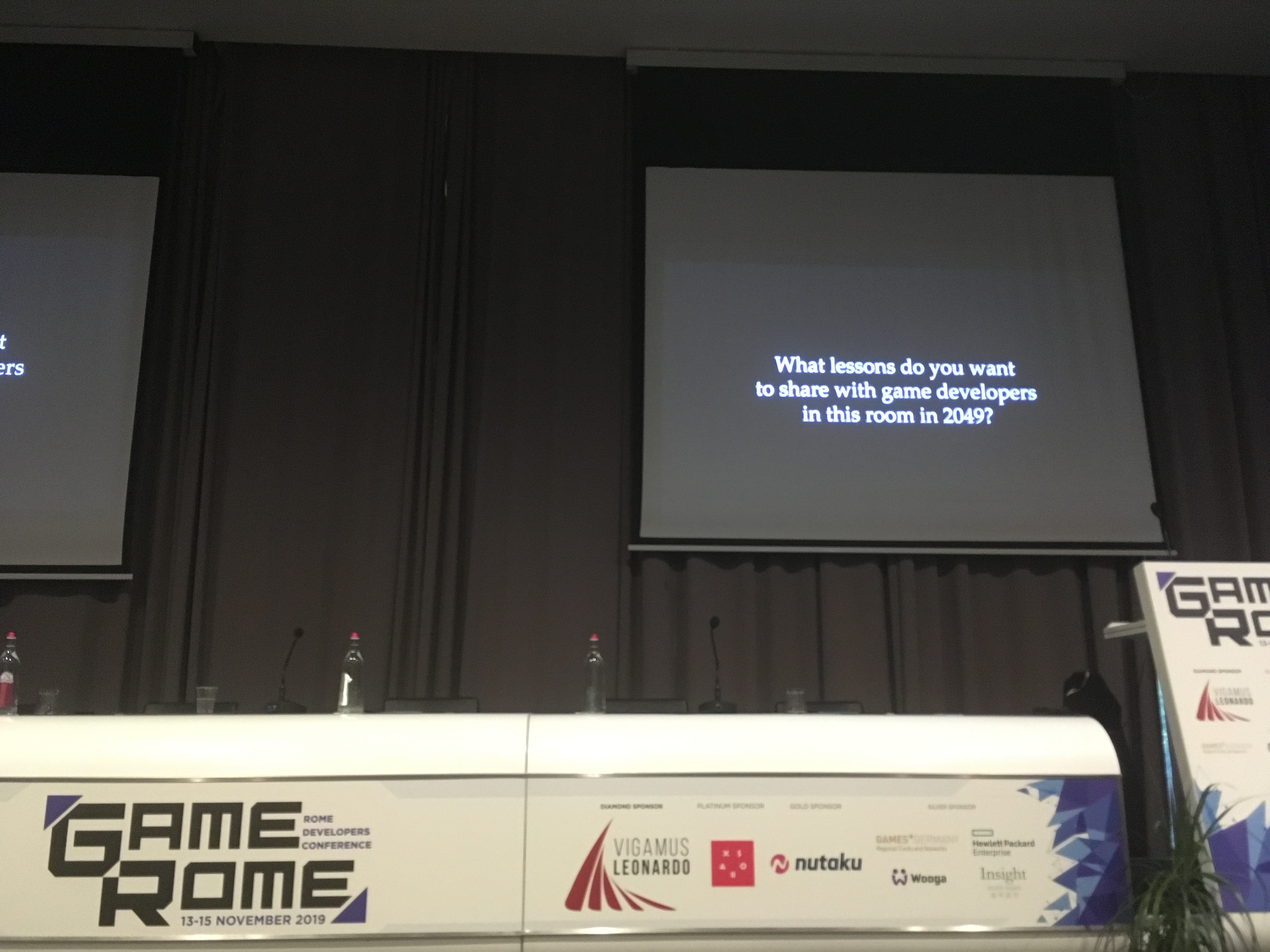 I could not end the recap with the prizes awarded during the Gamerome.
The Best Technical Achievement went to Tiny Money;
the Best Artistic Achievement and the Best of the Showcase they went to the very Italian Try 'n Cry;
three personalities introduced in Gamerome Hall of Fame: Kate Edwards, Ian Livingstone and Don Daglow;
Special Awardsand finally to Hidetaka "SWERY" Suehiro and Ikumi Nakamura.

With this, I truly believe it is everything. I thank the staff and the Gamerome press office for giving us the opportunity to follow this fantastic event closely. If Italy is becoming increasingly important in this sector, the merit is also in initiatives like these.

Battlefield prepares to land on mobile in 2022

Demon's Souls, 12 minutes of gameplay in the new State of Play