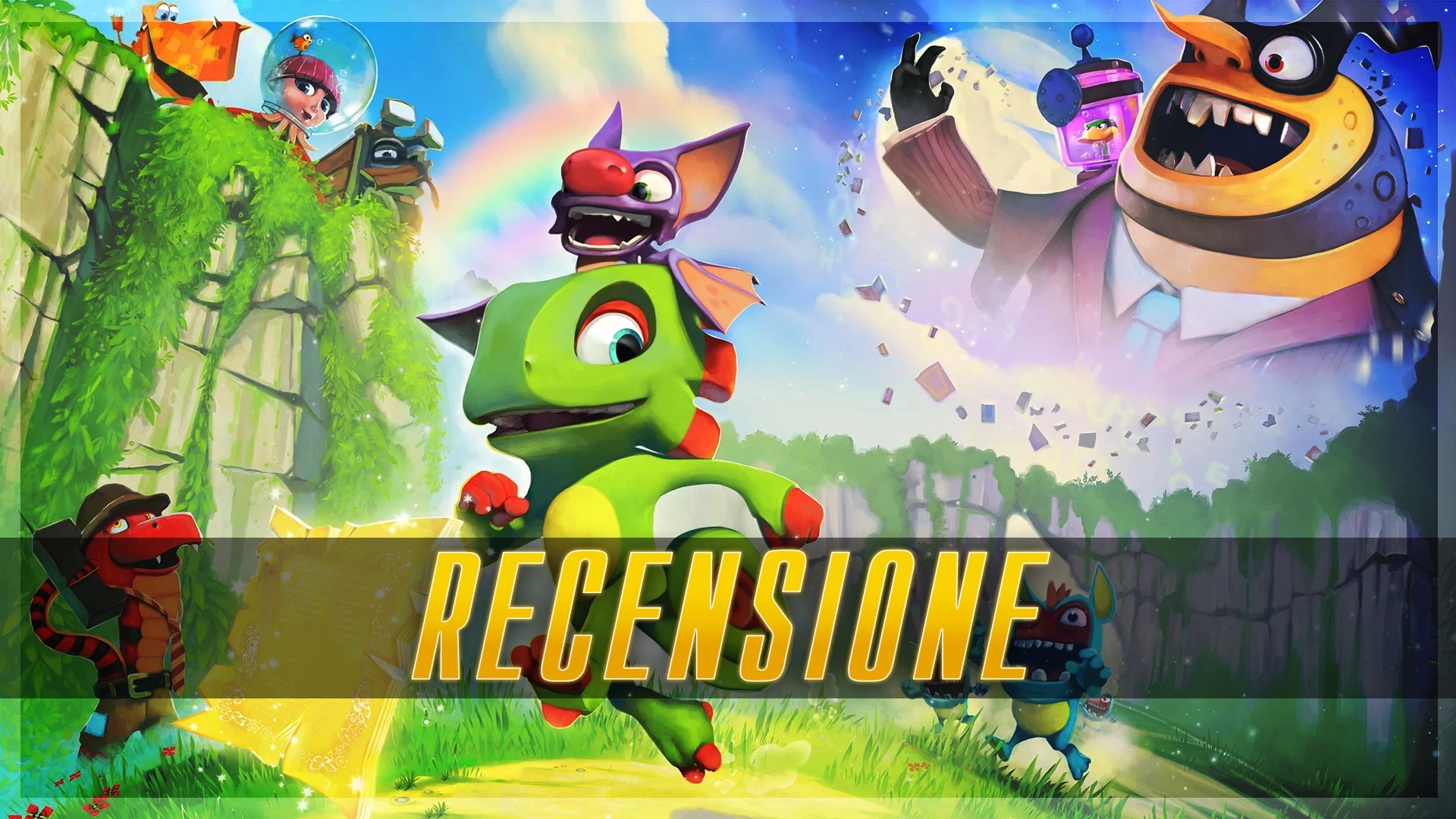 If you are a fan of videogames grown between the years '80 and' 90 it is likely that the name "Rare" have a certain importance in your vocabulary. Creators of some of the most iconic titles and characters in the history of this entertainment medium; Yooka-Laylee was born with the intention of following the footsteps of the award-winning couple "Banjo and Kazooie" which, at the time, shattered the platform titles and immediately broke the hearts of the players. The first title, while boasting interesting ideas, failed to fully meet the favor of either the public or the critics and remained only half successful. Yooka-Laylee and the Impossible Lair change registror and in some ways tries to go even further back in time, going to fish out, at least in part, the soul of the brand Donkey Kong Country. This choice, can only meet my favor, considering that Donkey Kong Country 2: Diddy 's Kong Quest, is still today my absolute favorite 2D platform. The robe of this spin off it is therefore more classic but has a series of grafts that they can give a breath of freshness to production. 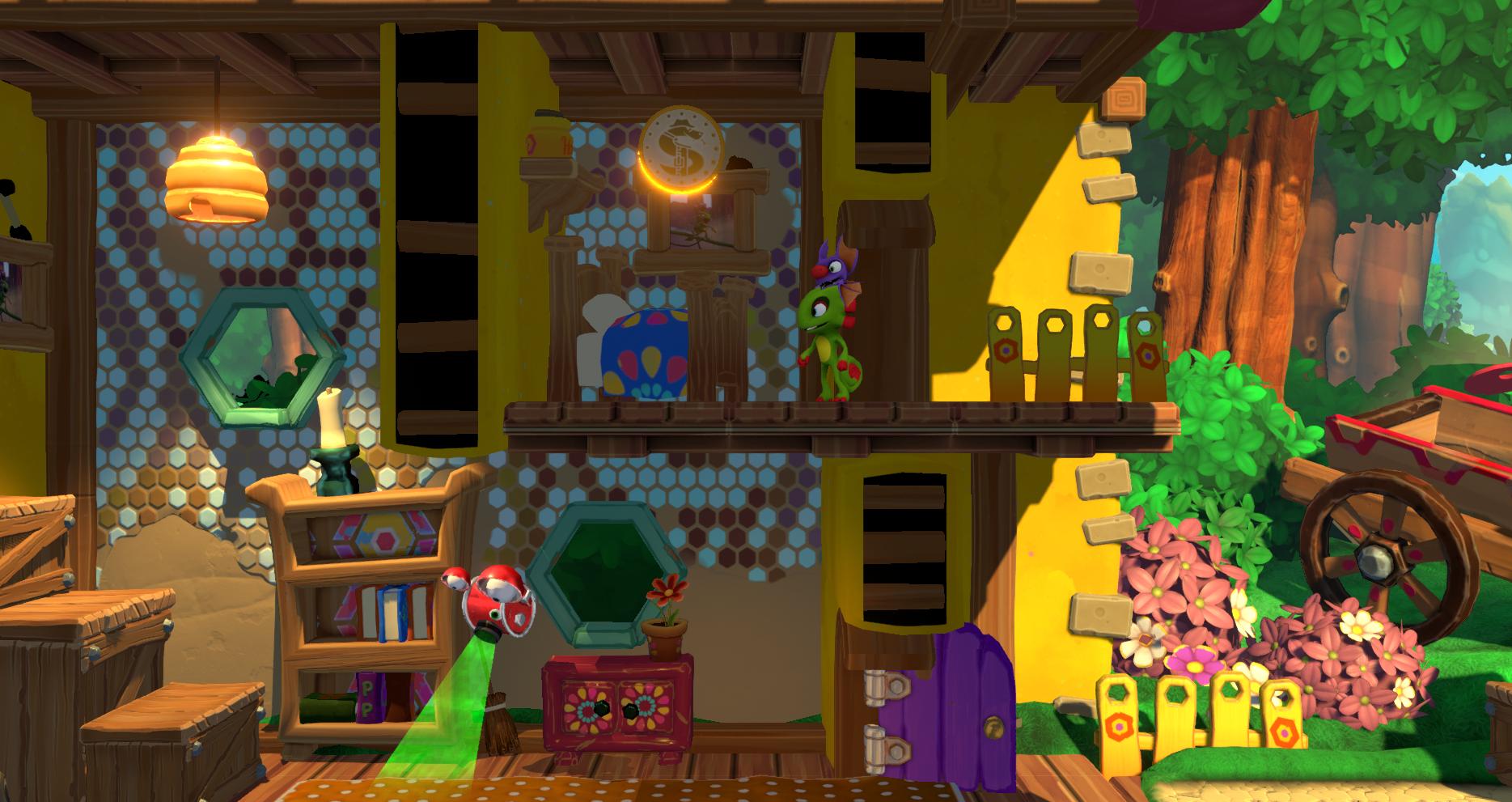 The timid history that is the background to the events of this second chapter revolves around the cruel Capital B, archenemy of the strange animalistic couple, intent on its conquest of the world through the mental control of the bees that make up the army of queen Phoebee. Our task is to free the imprisoned soldiers and therefore be able to face the den of our nemesis. The young chameleon Yooka can again count on the help of his companion Laylee, and on the support of the queen herself. We move more or less freely through the three-dimensional map, which it also presents small puzzles and platform sections, to be able to access one of the forty levels available in the unfolding of experience. Yooka is able to jump, grab objects with his oblong tongue and then throw them at enemies or destructible structures, but not only that: as long as the protagonist is joined by Laylee (which as usual also acts as an additional hit point), is able to roll quickly and damage enemies, elements of the scenario and overcome some obstacles more easily, also will be able to enjoy a more effective jump thanks to a short but decisive glide. Many of the mechanics are reminiscent of the titles based on the incursions of Donkey Kong and his family members, as well as in general the philosophy underlying the experience and the approach to it. In short, a formula that has already been well established but still works excellently. 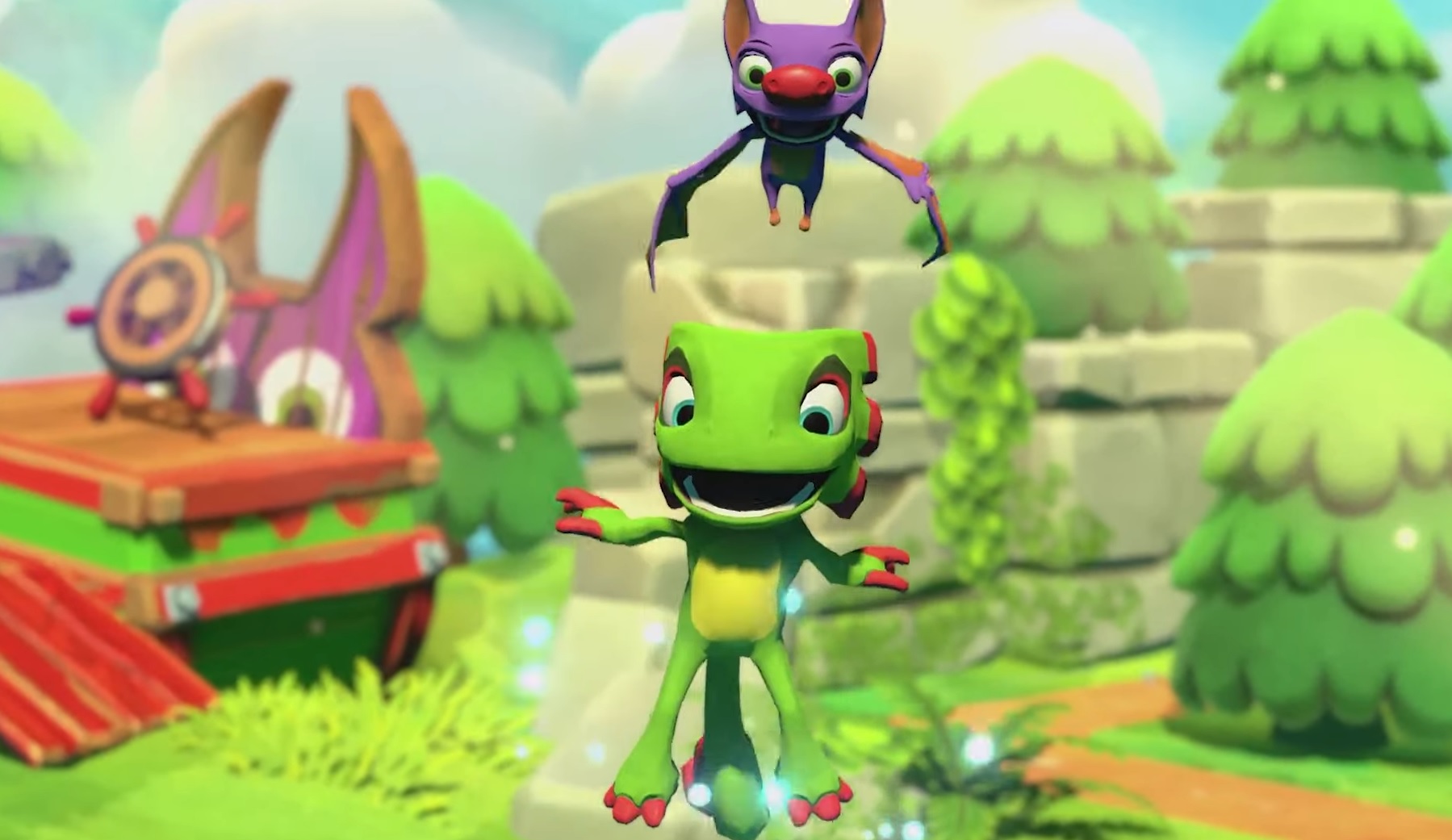 The level design of Yook-Laylee and the Impossible Lair offers well thought out schemes and fun, with secrets to discover, unlockable items and a well-built game rhythm. One of the strengths of the title is certainly its ability to renew itself and vary the offer, starting from double souls of which many of the 2D levels live thanks to the contamination of the same ones through the choices that we can adopt in the map of the Overworld. We are in fact given the possibility, through the resolution of some puzzles present in this mode, of make heavy changes to the levels just finished and give them a completely new face. In the early stages, we can admire a level dotted with aquatic columns turning into a frozen town: this allows us to reach otherwise inaccessible areas and exploit otherwise unusable mechanics. Or, by means of a mad invention, we can storm a level of voracious little monsters, transforming it into a sort of race against time. There are other examples and all of them can effectively turn our games upside down, greatly expanding the offer proposal. 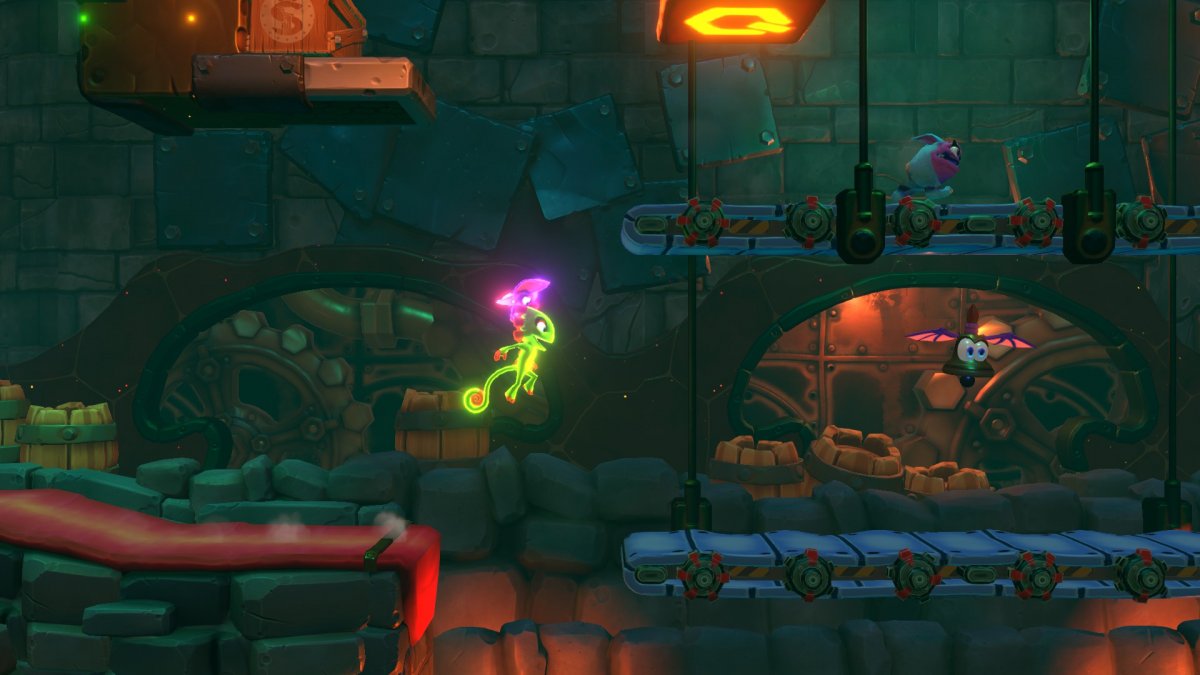 The other aspect absolutely not to be forgotten concerns the use of tonics, which can be unlocked while exploring the game world. These particular objects can be found in secret areas or received through some puzzles and can significantly change the experience, both in terms of appearance and level of challenge. Leaving aside therefore the "mod" purely aesthetic, like the black and white filter, the view in 4: 3 or the pixelated levels, we have available tonics capable of increase the strength of the enemies, or to upset our senses by letting us play upside down. There are also objects that can facilitate progression with some very useful bonuses like an easier recovery of Laylee if it is hit or the impossibility of losing the game currency (the Quills) even once defeated. This mechanism allows as simple as it is immediate modulate the difficulty of the game, raising or lowering the level of the challenge level to our liking and, at the same time, it is also a very pleasant system of unlockables, since the tonics to grab are more than sixty.

The real stroke of genius of production, as if the tonics were not enough, it is the presence of the level of the "final Boss", presented as an impassable prologue and subsequently as an almost inaccessible challenge. The act of releasing the 46 bees present in the world and in the levels of the game is not in fact an end in itself, and each freed animal allows us to cash an additional shot, in addition to that provided by Laylee, to be exploited exclusively in the harsh capital of Capital B. This framework absurdly difficult, in addition to providing the title for the game, it is the real challenge in which every lover of the genre will want to try their hand. Basically, the bravest (or stubborn) player can therefore try the final level indefinitely without even exploring a single centimeter of the vast Overworld, and get to the credits "simply" learning by heart every move to be executed without ever completing it. be hit. A business that I would dare to define wicked but it is still an extra option that is provided to the player and who, maybe, will become the ultimate challenge for platform gaming professionals. 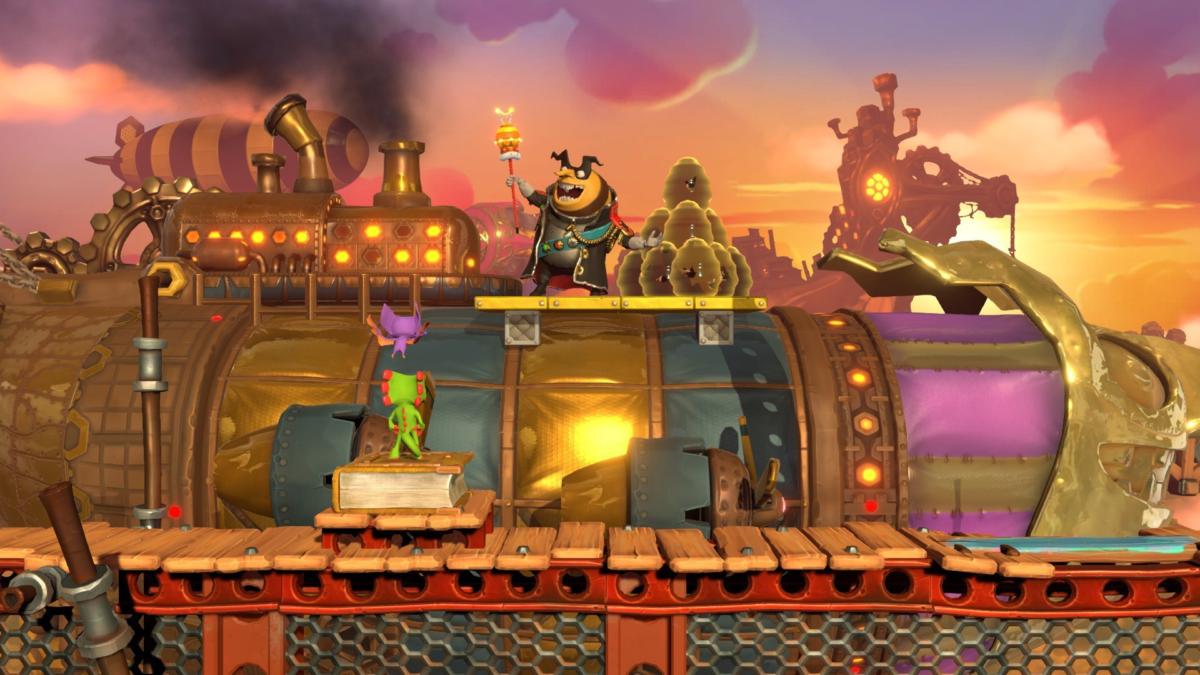 The very lively world of Yooka-Laylee looks good, with a colorful and quite full-bodied graphic detail but, unfortunately, very little inspired on an artistic level. It might seem like a side note, yet it is one of the aspects on which most production and, indeed, the entire brand limps. The character design of Yooka and Laylee is almost perfect, winking at "old school" characters but defining them perfectly in a personal perspective, but this is really only true for them. All the supporting actors, with the possible exception of Queen Phoebee, are almost present anonymous, with a striking drop on all the characters / objects that dot the adventure. I'm really sorry, but it is not enough to put a pair of eyes on every existing object or animal to make it a character. This artistic poverty one breathes constantly and for me it is one of the fundamental aspects that undermine the experience and that still prevent the dynamic duo from having their own strong and well-defined identity. For the rest, the experience runs smoothly also in the Switch version, which pays good fluidity with a little loss of detail and compression in portable mode: nothing serious anyway since it remains always pleasant also in this case.

Yooka-Laylee and the Impossible Lair is a title surprising, which comes out at a time when it will hardly find its space, but that will manage to entertain any enthusiast such. A good level design combined with the genius of the tonics able to modulate the difficulty, the Impossible Lair and the ton of unlockables available, succeed in puncture the screen and the ticket price is absolutely valid. The brand is still artistically weak and uninspired fails to build its own strong visual identity, but it matures in every other respect. The 2D bracket of the series is indovinatissima and is perhaps the best way to go for the odd pair of Playtonic Games, but their future is still shrouded in mystery, of course. If you grew up on bread and Donkey Kong or Banjo-Kazooie and Nutella, you have no excuse: 8 October you will have an appointment with a chameleon and his trusty chiroptera friend.