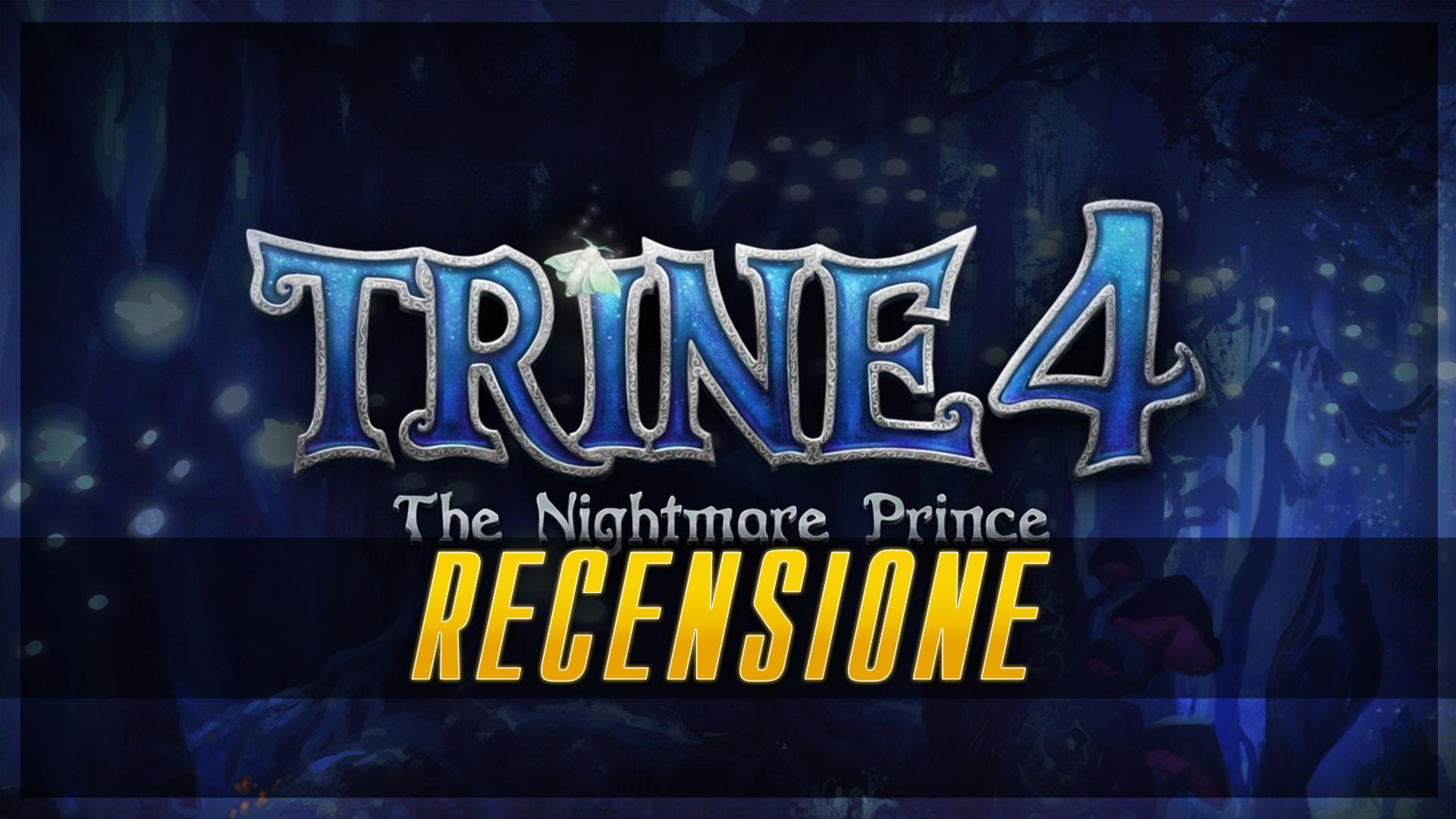 The adventures of the three heroes reach their fourth incarnation. Trine 4 - The Nightmare Prince, developed by Frozenbyte, arrived on all consoles and on PC, ready to make you puzzle. I have already had the opportunity to get my hands on the title previously, even if with a test build, to write a small preview that you can find at the following link, and in these days I was finally given the code of the final version. If already with a provisional version I had the opportunity to test the quality of the product, the test of the complete title started with a spirit that was all in all positive. For heaven's sake, however, the doubts were present, but they were almost completely wiped out. So get ready to walk on the ropes of Zoya, while you shelter with the shield of Pontius and create cubes, spheres and plates with Amadeus trying to face their worst nightmares.

After dealing with the Artifact that gave the title to the third chapter, this time the trio has to face the terrible nightmares of the prince Selius, endowed with magical powers, unfortunately not controllable, which allow the materialization of fears not only of the prince, but also of the people around him. We must therefore start pursuing the prince through forests, marshes and snow-capped peaks, also giving a hand to the characters we meet - do not get confused thinking that they are secondary missions because, in fact, they are not - and trying to create a potion, thanks also to the aid of powerful magical creatures, to give to the unfortunate dreamer. There plot, even during the game, it never develops more than this and always remains undertone, mild and without any twist, then appearing flat and definitely little inspired. However, the attempt to enrich the whole with letters, to be found within the various levels and which slightly enhance the overall picture, appears to be sympathetic. But you will soon forget: the game's juice is found elsewhere.

Throughout the adventure the heroes always acquire new skills and are empowered through a skill tree somewhat gaunt. It is divided into two: on one side there are the essential skills, acquired automatically at certain points in the game, which can then be improved. Improvements that however seem quite irrelevant. Take into account that I have developed just a couple of them without then deriving an actual tangible bonus: in short, if this possibility had not been included, nobody would have missed it. These improvements are then focused purely on improving the offensive or defensive capabilities, useful in fighting that defining copy and paste with one another is perhaps a favor. Every now and then, in the course of the level, we find ourselves engaged in brief struggles against a small group of enemies, usually divided into elemental spiders, wolves, archers and bombers. The variety of enemies is almost non-existent and even reaching the last levels, the challenge level is always at low levels.

A completely different discourse than the one concerning the environmental puzzles. It is in fact on these that the whole Trine 4 proposal is based. To face them better, you need to learn how to extricate yourself various possibilities offered by the characters and weave them together. So there are situations where, while we are on one rope created by Zoya, deflettiamo with the shield of Pontius a ray of light towards a flower while we are protected by a slab created by Amadeus and previously positioned. To this are added then puzzle based on the elements, in which we must take advantage of the possibility of freezing the objects given by the freezing arrows, activating particular switches using the flaming arrows or exploiting the conductivity of the objects created by the magician to connect with the electricity of the coils. Too bad that this last possibility is offered in only one level, but it seems to have been a precise development choice since, in every level or almost, we find a peculiar element to deal with. Green brambles that explode objects, snow in which to fix them, or even magnets to exploit. Ideas have not been lacking certainly but, also in this case, they all seem to be hurried and hardly used, perhaps due to the congenital lack of budget of the development studio.

As you proceed with the game the whole unfolds and complicates more and more, with the magician busy creating up to three objects, of three different shapes; the warrior who learns to create up to two copies of his shield in order to deflect the incoming bullets or the water as well as the light. The difficulty curve rises gradually but inexorably, without ever coming to a real feeling of frustration. Only in three / four particular cases did I stay a little longer in some sections. Sure, sometimes it almost seemed to me to cheat, passing riddles with unorthodox methods, exploiting badly made collisions and extremely fortunate positions, also give me the approximate physics of the game, but it was still fun. However, there is one important thing to stress: the game, if faced together with friends, changes radically. During the test phase of the trial version that was sent to me I played all the levels together with my girlfriend, taking advantage of the possibility offered by the local cooperative, and the laughter was constant. We tried to survive in every way but often we jumped into each other, falling towards death. We also fought to decide how to overcome a certain enigma. The game really changes, and it is not a manner of speaking. Depending on how many "human" players are present, the puzzles change accordingly, thus making everyone's participation necessary. And I also believed that the puzzles themselves would have been the basis also of the several bosses present in the game, but I was wrong. Apart from a few "generic", the monsters of the end of the world we meet can be faced by just one party character being their nemesis or better, their nightmare. Except for the one dedicated to Amadeus the magician, the others need a bit of brute strength and an extremely basic knowledge of the possibilities offered by the controlled character to get the best of it in the easiest and most painless way possible.

In short, even in this fourth incarnation, Frozenbyte does not seem to have shaken off the problems it carries with it. Many aspects of the game appear to be treated in a superficial way but, despite everything, the combination of puzzles, music and so on beautiful artistic style manage to capture the player, especially in the company. The graphic engine used, owner of the software house and updated for the occasion, returns some simply enchanting landscapes. Technically I didn't have the slightest problem and, given the options, the title seems well scalable and executable even on low-performance configurations. However, we arrived at the fourth time in which we think "well, from the next chapter they correct their defects". Perhaps the time would have come, so as to give even more luster to a series that, after all, would also deserve it.

The game was run on the following configuration: