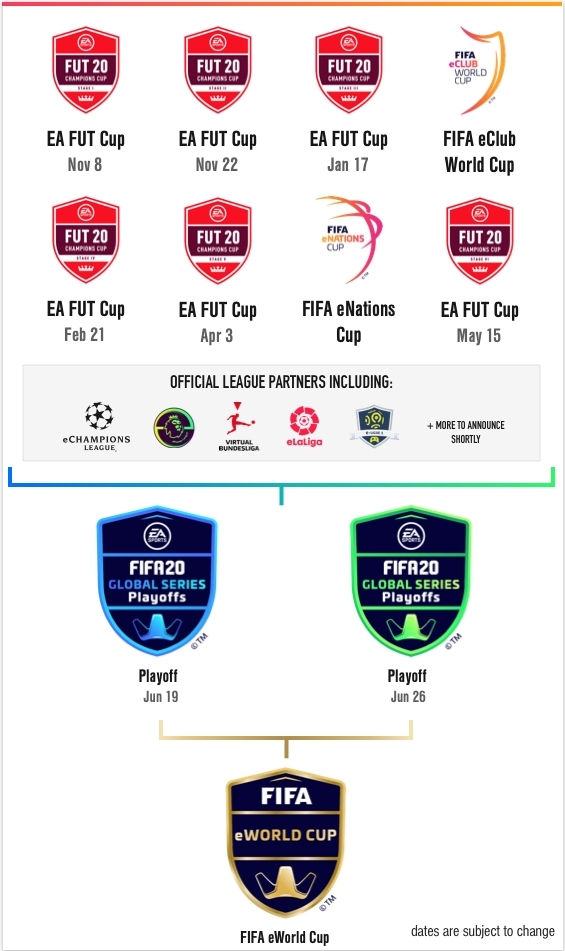 “The EA SPORTS FIFA 20 "Global Series is the most inclusive exporting on the planet," said FIFA Competitive Gaming Commissioner Brent Koning. “Anyone can become a superstar and the opportunity to make has accelerated with more than 20 official league partners now in the mix. This connection to global sport drives viewer intrigue, and that positions well for surpassing last year's 800 million minutes of EA SPORTS FIFA 19 Global Series content watched. "

The EA SPORTS FIFA 20 Global Series schedule can be found at http://www.futchampions.com and below are additional ways to compete and watch.

All eligible players interested in joining the EA SPORTS FIFA 20 Global Series * need to register at http://www.futchampions.com between now and October 31, 2019 or January 16, 2020 and January 31, 2020. As a registered player, you can become FUT Champions Verified by achieving a ranking of 1 Elite in Weekend League after which you may receive invitations to play in online qualifier tournaments and earn EA SPORTS FIFA 20 Global Series Ranking Points. Rankings throughout the season will be available on FIFA.gg. For more EA SPORTS FIFA 20 competitive details, please CLICK HERE.

* Eligibility restrictions apply. If it's Official Rules for details. Final terms and structure subject to change.

Ashes of Outland ™ Unleashes the Demon Hunter and Heralds a New ...