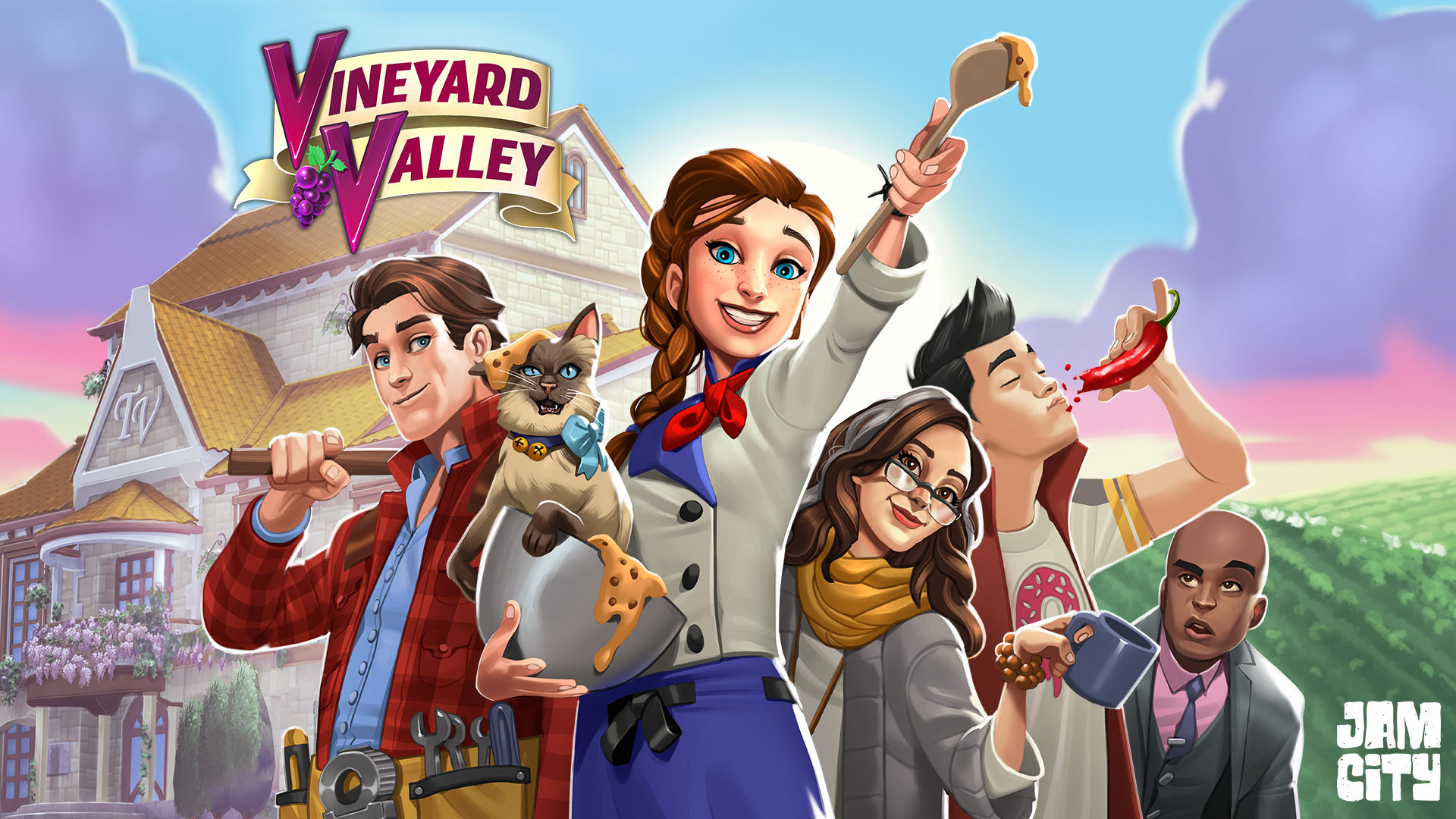 LOS ANGELES– (BUSINESS WIRE) -#GenevieveGorder- Jam City, a global leader in mobile entertainment, today unveiled its newest entertainment franchise Vineyard Valley. The game invites players to renovate the Tangled Vines Vineyard and restore it to its former glory. Players are joined by to different characters who will work together to uncover secrets and mysteries in the game. Jam City's game is a step forward for mobile puzzle games delivering sophisticated and satisfying experience that blends multiple gameplay mechanics, characters and storyline, social features, and aspirational interior design choices. Vineyard Valley is now available in the App Store and Google Play.

Jam City also announced it has partnered with Genevieve Gorder, celebrity interior designer and Emmy-nominated television personality (Netflix's Stay Here, Bravo's Best Room Wins, and TLC's Trading Spaces) on Vineyard Valley. Genevieve collaborated with the game development team to bring expertise to interior design and renovation opportunities in the game. She's developed design looks and furniture packs that reflect current trends in interior design which will be available as upgrades within the game later this year. Genevieve will be featured in-game events where players can shop her design picks to customize their own Vineyard Valley resort.

“Partnering with Jam City on Vineyard Valley was such an incredible invitation. I've been playing mobile games for years, and to work on one is a dream. Collaborating with the development team and merging current home aesthetics into a mobile game has been a project in my imagination for years. "I hope this is just the start of a long marriage with Jam City," said Genevieve Gorder. "This is the first game I've played that entertained me with a real design aesthetic. The renovation choices are higher-end and designed, and because of that, the game feels aspirational. I haven't seen anything like it in this genre before. "

“Genevieve Gorder is a world-class designer and an avid mobile game player, partnering with her on Vineyard Valley said Josh Yguado, COO at Jam City. "Vineyard Valley features current design trends along with fun gameplay and characters. Genevieve helped us deliver on the drama and excitement of renovations shows. "

In Vineyard Valley, Players restore Tangled Vines, a once-beautiful vineyard resort that has fallen on hard times. Players will beat challenging blast puzzle levels to design & renovate the vineyard resort. They will team up with a lovable cast of unpredictable characters, and uncover secrets and mysteries from the Tangled Vines' past and complete quests to grow a catering business into an acclaimed destination resort.

Vineyard Valley is the latest franchise in Jam City's continued expansion of its business. Jam City recently announced its first European studio, Jam City Berlin, which increases its global presence to nine studios worldwide. And this fall, Jam City will release its new mobile game based on the sequel to Disney's movie Frozen.

Genevieve Gorder's soulful style and genuine enthusiasm for many years. Gorder has appeared in over 20 lifestyle shows around the world. You can find work on Netflix, TLC, HGTV, Sony Channel Asia, The Design Network and as a regular contributor on The Rachel Ray Show. A two-time Emmy nominee and design host at the Obama White House, Genevieve has built multiple lifestyle collections for the home. Gorder's work has been featured in numerous publications both nationally and internationally.

Genevieve resides with her husband and daughter in Manhattan.

Jam City is an award-winning mobile entertainment studio providing a unique and deeply engaging games that appeal to a broad, global audience. Led by CEO Chris DeWolfe, former MySpace co-founder and CEO, and COO Josh Yguado, former 20th Century Fox executive, Jam City is the creative powerhouse behind some of the highest-grossing and most enduring mobile games. Jam City's global franchise Cookie Jam has generated more than half a billion dollars, and Panda Pop has more than 120 million downloads to date. The company is a go-to studio for Hollywood, having developed immersive, narrative-rich mobile games around iconic entertainment brands. The company's popular RPG game Harry Potter: Hogwarts Mystery was the #1 game in more than 40 countries at its launch in April 2018. Jam City has nine studios located in Los Angeles (HQ), San Francisco, San Diego, Burbank, Bogotá, Berlin, Toronto, and Buenos Aires.

Piermatteo Bruno - June 21 2021
In 2010, Katsuhiro Harada and Yashinori Ono announced the start of a partnership between Bandai Namco and Capcom that would take shape in two games ...
News

Vincenzo Marino - June 21 2021
Square Enix says it is "pleasantly surprised" by the success of its new IP, Outriders, stating that "the digital sales report for the title is ...