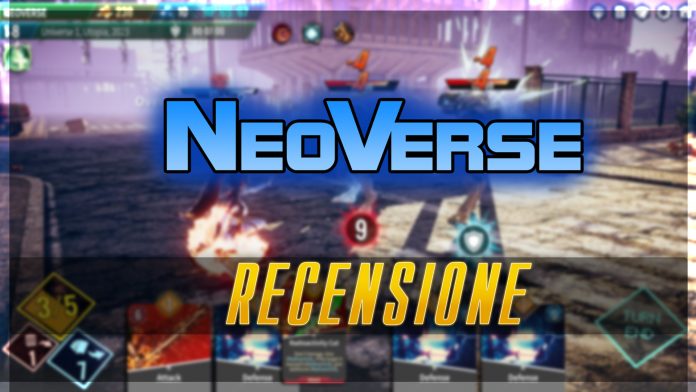 In the 2017 he made the appearance on Steam a game that has received unexpected success, from the name Slay the Spire, which brought to the fore a genre completely unknown as that of the roguelike deck building.
Having started off quietly, thanks above all to a Chinese streamer, the game has reached almost two million copies sold and, as always when something has such an overwhelming success, imitations and reinterpretations have started.
It is following this trail that is born Neoverse, developed and published by Tinogames Inc., available on Steam for € 14,99.

Before going into the review of Neoverse, let's stop for a moment to spend a few words on the genre roguelike deck building.

The mechanics of deck-building is inspired by the world of board games where it has had tremendous success in such titles Dominion or, my favorite, Legendary (which uses a very tasty Marvel license). At the start of the game the player starts with a deck consisting of a certain number of predetermined cards and, depending on the specific acquisition mechanics of the game, increases the number during the game. Each card usually has a cost to be played, even in this case each title has a different mechanic, and once used its effects are activated, after which the card is placed in a discard pile. Once the deck ends, take the discard pile, shuffle and a new deck is formed, which will contain any cards added during the game, which however in Neoverse it happens only at the end or outside the battle, through the loot of end stage or the purchases in the shop.

Less problems should give the terminology related to the word roguelike, which indicates a category of role-playing games where the player has to deal with random maps with shift movements and the shadow of permadeath looming around the corner. The combination of the two genres has created a hybrid that has a unique feature: infinite replayability. In fact, thanks to the procedural maps and the different composition and management of the deck, titles of this genre can offer truly unlimited combinations that allow you to replay the title for a very long time.

But let's get back to talking about Neoverse, in which since the trailer we can see that unlike Slay the Spire the action develops in a setting that mixes the fantasy genre with the sci-fi one, which some define "Space Opera". At the beginning of the game you can only use theAgent Naya, but in no time you can also unlock the paladin Claire and l 'Summoner Helena. Special features of Neoverse is that, in addition to giving us access to three characters with completely different skills and cards, each of the three also has two types of game to choose from. For example the paladin Claier, the first with which I managed to finish a complete run, can choose the specialization Vampiric which allows you to be healed depending on the damage inflicted on the cost of 5 HP each turn, or that priest, which accumulates Faith points for healing at the end of the turn and activate special abilities based on this characteristic. Obviously nothing prevents the player from using hybrid strategies, which I strongly advise against, given that often the strategy cards don't work very well with the other.

The aim of the game is to complete three chapters, each consisting of twelve stages. The game starts with very simple battles, but as the adventure continues, the difficulty increases considerably. Every game is never the same as the previous one and therefore the 36 stages that separate us from the final victory will always be different, apart from the twelfth stage of each chapter that includes a Boss Battle. Even if for some strange reason we had to find two runs with the same sequence of stages, probably the enemies encountered inside it would be different.

The stages available are of 6 types:

At the beginning of each chapter it is possible to choose whether to make a run “normal"Or"challenge"Where there will be more elite battles that, in the face of greater risks, provide greater rewards and better scores. There is also a NG +, named Transcended Universe, where in exchange for bonuses to the opponents or malus to our character we can get higher scores at the end of the game, but I assure you that before finishing the first complete run a little time will pass ...

At the end of each run, whether it has ended successfully after the 36 stage or with premature death of our character, we will be given a summary table with the points obtained during the game, which give us access to a world-wide leaderboard that is reset weekly, thus giving us the incentive to try to improve our performance and game scale, game by game.

Finally we get to the heart of the game: the battles. Certainly the visual impact is far more satisfying in Neoverse than in other titles of the same genre, especially when compared with Slay the Spire which for now represents the best of the best in terms of gameplay roguelike deck building, since the graphic models and the visual effects are very well taken care of.

The player starts with 5 mana available, even if this number is variable depending on the active skills, and 5 cards in hand. Each card has a mana cost, and once a card is played we will draw another. It is easy to understand that having cards with low mana cost or having some ones that generate them, allows us to create very interesting combinations, if not fundamental to face the Elite and Boss Battle.

The enemies, besides 70 present at the moment in the game, unlike us do not have a deck of cards, but perform only one action per turn. This action can basically be of three types: attack, defense or special skill.

Depending on the action that our enemies show, the player must make the choice of which strategy to implement with the cards, the objects and the skills at his disposal. The skills can be purchased, as already mentioned, with the skill points we will receive after passing certain stages, but they must be chosen consistently with the specialization of the character we are using. Of note, apart from some basic skills, there are many skills specific to class and specialization, thus allowing the player to customize his character in a different way from the previous one, almost every new run, even if, after a few games, it becomes evident how some combinations work better than others.

I admit that Neoverse caught the eye from the first moment I got my hands on it. Furthermore, accessing the game's backups from the cloud allows you to start a run on your home's desktop and safely take it back on your laptop or any other computer on which you have access to your account. Steam.

Some might argue that he does not invent anything new in the genre, but often he does not necessarily need to innovate to be convincing. Neoverse it's a roguelike deck building very solid with a captivating graphic compartment, while it is not possible to say the same for the sound one.

As for the replay value I think I was very clear in saying that Neoverse it has absolutely no faults from this point of view, but I expect the developers of future updates with new skills, monsters, cards and above all new characters, to improve a product that I consider, already at present, very good.