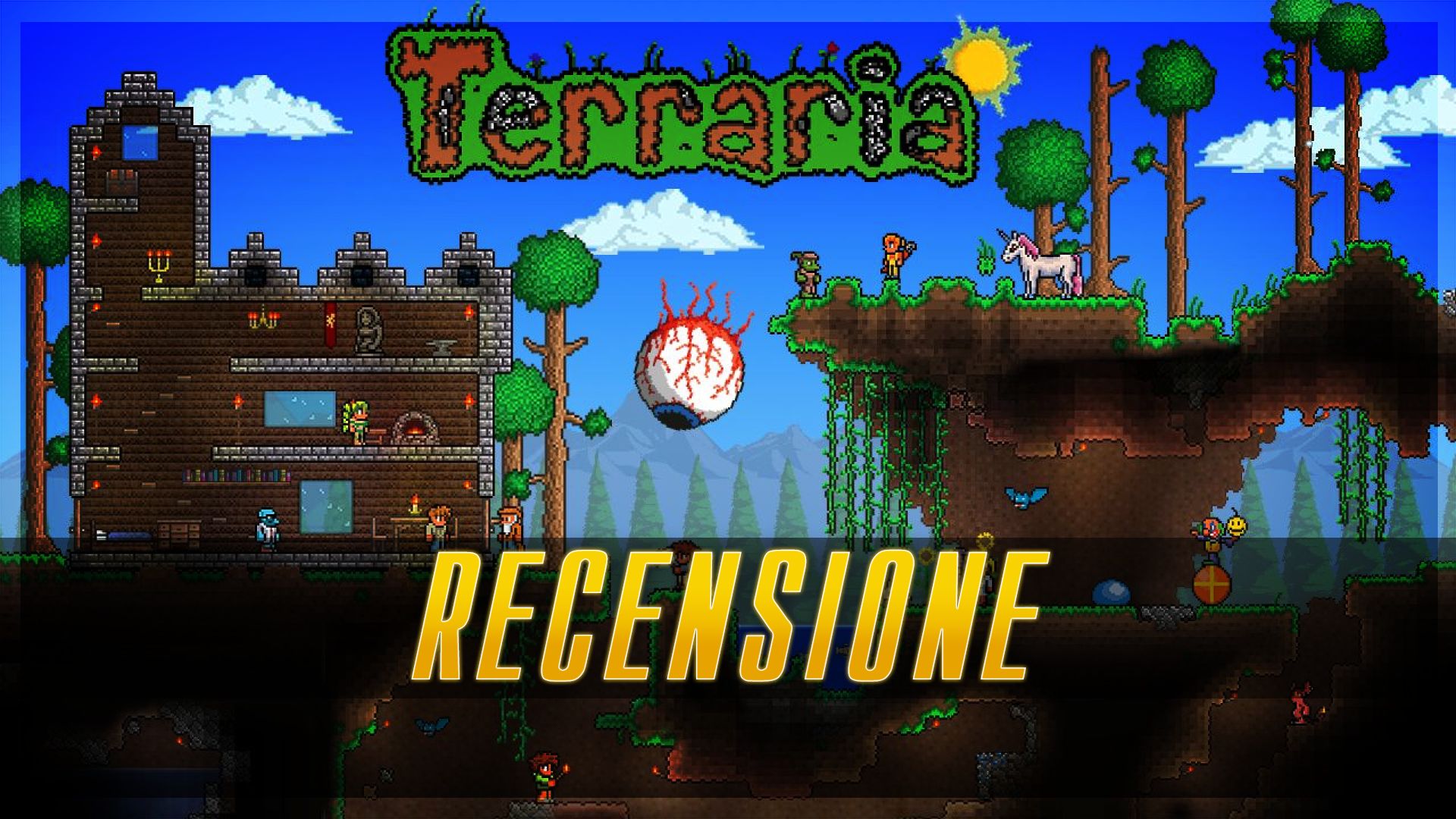 For those who in recent years have been caught by the "sandboxmania"Born with Minecraft, it is impossible not to know Terraria.

The game created by Re-Logic is often belittled as a simple one "Minecraft 2D", but while the giant of the house Microsoft is focused on construction, Terraria it aims much more at exploring, building new instruments and fighting.

On the other hand the developers of the two games know very well that they are not in direct competition so much so that they took part in a campaign of "mutual advertising”Somewhat unusual with regard to the world of video games. 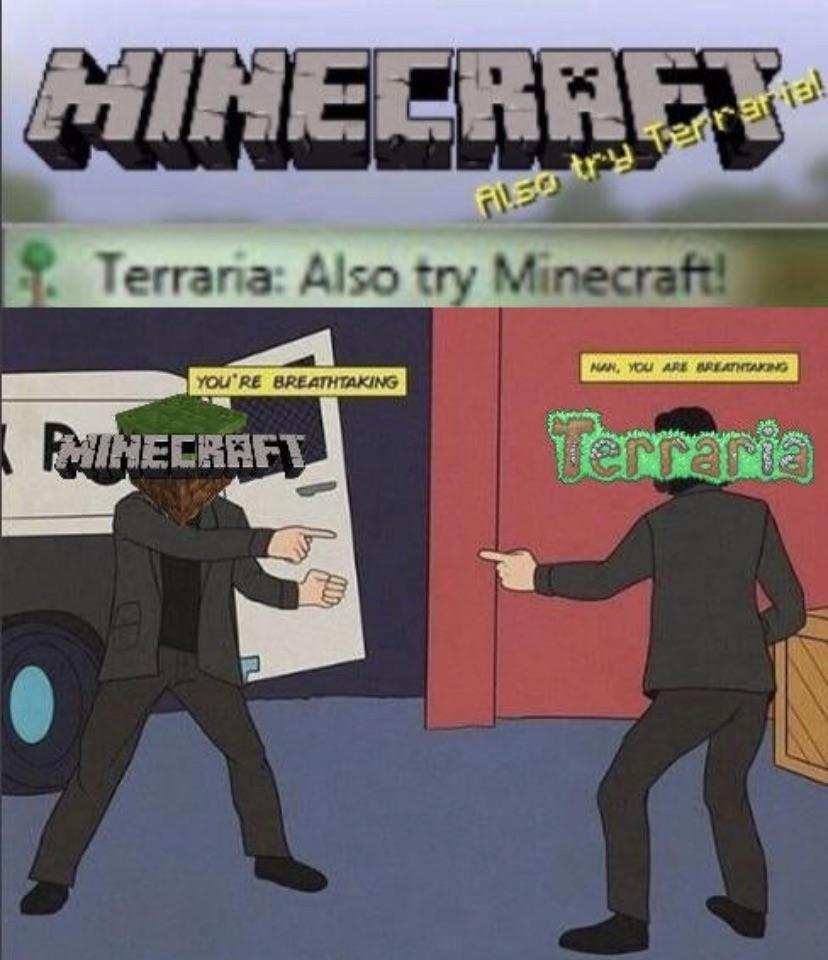 After selling around 27 millions of copies on all possible platforms, Terraria finally makes its appearance also on Nintendo Switch.

The game is in circulation by the 2011 and from the point of view of the gameplay (and of guides) everything has already been said. Born on the wave of success of Minecraft, the title of Re-Logic it differs above all for the focus on the content "endgame"(Although it may seem strange to speak of an endgame in a sandbox title) composed of dungeons, beehives, hellish biomes, a truly remarkable creature park, increasingly difficult bosses and ever richer loots.

The look "building"Ends in the background, above all because of the limitations of the 2D, but this does not mean that we cannot dedicate ourselves to the construction of our settlements with passion and imagination.

For newcomers to the game there is a tutorial that explains the basics of step by step Terraria, but once completed we are not left alone to ourselves, since in each new game we are accompanied by a guide who gives us useful suggestions on how to move. Given that the game is completely localized in Italian, there are no language barriers at the entrance either.

As in any survival sandbox game that respects the first moments of the game are dedicated to the construction of the necessary tools to realize the first safe shelter, given that at nightfall, hordes of enemies make their appearance and try to make us skin.

And here we are then starting to dig the earth, picking the stone and cutting trees, to put together four walls, a door and a work table, fundamental for the construction of new equipment and equipment to face the challenges that the world of Terraria, obviously procedurally generated, it proposes us to reach the third dimension, the infernal one and defeat the boss of "end game", the Wall of Flesh, which in reality once beaten will unlock the Hardmode with new monsters strengthened.

As we find new materials we can build new tools, equipment and structures which in turn can unlock new items or call NPCs to visit us if we meet certain conditions, such as collecting 50 silver coins for the merchant or defeating a boss to call the dryad.

What is most intriguing in this version for Nintendo Switch, however, is the porting of the controls, given that the keyboard-mouse combination used on PC was an almost perfect combination to enjoy Terraria to the best. In the docked version Terraria uses two different types of aiming: the first uses the left directional cross to aim precisely the block with which we want to interact, while the second uses the right analogue, a way that I found extremely inconvenient and that made me lose a lot of time even for the simplest tasks such as placing a simple torch on a wall or a wooden platform.

But the real news we have in Handheld mode, since Terraria uses the Nintendo Switch touchscreen. In fact it is possible using the touchscreen to perform practically any action present in the game, such as managing the inventory, building new objects, equipping them and obviously also gathering resources and digging the ground. When using the touchscreen for these latter activities, a sort of magnifying glass is activated, which shows us exactly where we are intervening, allowing us a certain precision, although perhaps the ideal would have been the use of a nib for greater control .

In the end, after trying all three modes available, I decided definitively for the one that uses the left directional cross, a little slower than the one that uses the touchscreen, but certainly more precise. On the other hand Terraria it is not a game that needs to be dealt with quickly and therefore the gameplay is not affected much by a few seconds lost here and there during construction.

As for multiplayer, one of the most interesting aspects of Terraria, the game supports the online co-op mode (obviously the registration to the Nintendo Switch Online services is required), but not the local co-op with split screen that made the fortune of the game on other platforms. But there is no need to despair since Re-Logic intends to implement a wireless co-op mode in the future, thus allowing the owners of Nintendo Switch to play together even without having to pay the cost of subscribing for online services.

The thing that most out of place in this port for Nintendo Swich is certainly the price, 30 euro, considering that the game was even distributed for a few years free for PS Plus owners and in any case on other platforms it costs 10 euro less. Let it be clear, however, that Terraria it is worth much more than the requested 30 euro, if we take into account the hours of play it can provide, but since there are cheaper solutions (and with more suitable controls, such as the PC version), the figure makes the nose turn up a lot.

Apart from this sore point, Terraria remains one of those titles that must be present in the library of every gamer and, if until now you had escaped its charm, this version for Nintendo Switch it is ideal for those who, like me, find little time for continuous gaming sessions in front of a PC screen or a fixed console, but manage to carve out many small moments during the day to be exploited thanks to the portability of the Nintendo home console .