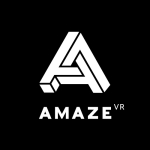 New content designed to broaden VR audience and accelerate the peace of adoption.

The new exclusive experiences are part of AmazeVR's strategy to deliver the most compelling, entertaining and highest quality VR content available. Light Balance's innovative performances and avid fanbase make it an ideal choice for next generation VR experiences. Light Balance has cultivated more than 250K followers and topped 50 million views of its performance, opened the possibility for VR to draw in a broader audience with Light Balance's fan migration to new immersive realm.

To bring the experiences to life, AmazeVR worked with Virtuality, the LA-based immersive entertainment startup that produced the act. The resulting content captivating Light Balance performers dancing inside a 6K stereoscopic 360-environment, along with neon enhancements and original audio from EDM producer, Justified Noise.

"We believe Light Balance in VR encapsulates how to make experiential immersive content can now go," said Virtuality founder, Mark Rickard. "So early 360-video and token brand-driven experiences left many feeling underwhelmed with VR's potential, we set out to create something that guarantees a 'wow factor' - whether from the seasoned VR enthusiast or someone trying it for the first time."

The Light Balance experiences developed with Virtuality are just the beginning. The companies' shared vision promises to help evolve the VR landscape.

"We are thrilled to be working with creative studios like Virtuality because of the lack of great content on mass adoption issues," said Ernest Lee, chief content officer of AmazeVR. “We have a slate of content to produce with Virtuality, with our other production partners, to establish a consistent pipeline of content users love. Doing so will create a meaningful ecosystem for VR creators as well as develop the ability to monetize content that audiences value. "

As a result of its recent Series A funding from a slew of leading VR investors from across the globe, AmazeVR is well-positioned to help AmazeVR is committed to delivering the world's best VR experiences with new premium releases weekly. New releases span performances, interactive story-branching narratives, and the best cinematic VR.

The Light Balance VR experience is available today on AmazeVR for $ 3.99

With custom equipment / tools, proprietary software, and hands-on teams, Amaze develops, curates, and produces VR content for those who want to be part of the next wave of content creation. AmazeVR content is distributed through all major VR stores. The company is backed by Mirae Asset Group, LG Technology Ventures, Timewise Investment, and Smilegate Investment. It is based in Sunnyvale, California, with additional offices in West Hollywood. Learn more at www.amaze.us.

Nicolae Locatelli - August 12 2020
Nintendo has filed new trademarks for The Legend of Zelda and Super Mario. That some news is coming in view of the 35 years ...
BusinessWire