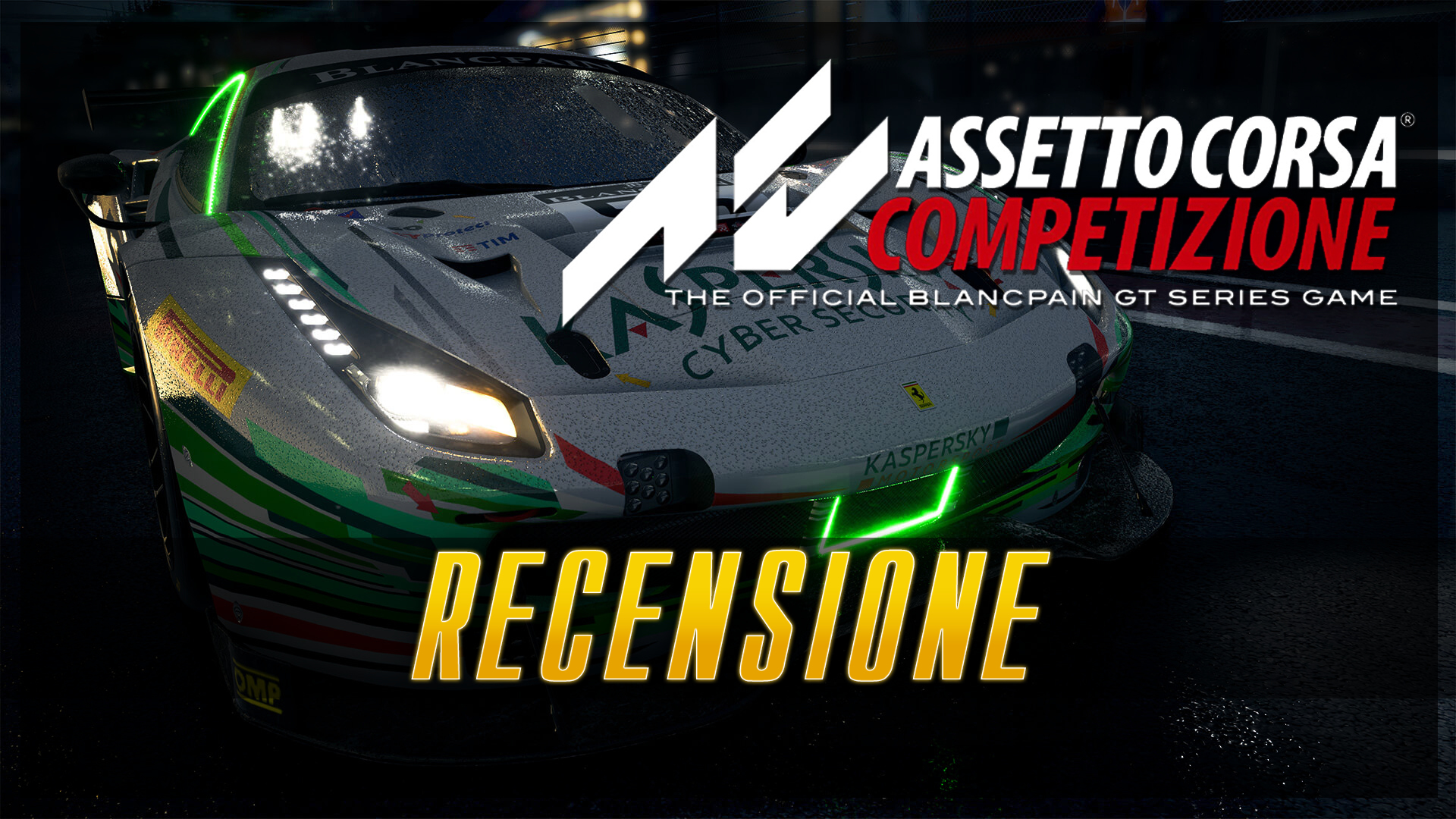 I hope you like the Blancpain GT Series a lot

The original Assetto Corsa, simulative racing game of the Italian team KUNOS Simulations, imposed itself on the gaming market among the best racing games. With this second chapter / spin-off, it was decided to pursue a "high" instead of a broad road. Focus on a few cars, few circuits, but take care of them to the maximum.

The part of the automotive world on which Assetto Corsa Competizione goes to concentrate are the Blancpain GT Series, dedicated to the world of the GT category road machines adapted for racing competition, in what is known as GT3 category. The game is officially licensed by the competition and you will be introduced to the game by Mirko Bortolotti, 2017 champion on board the Lamborghini Huracán.

The choice of this kind of competition is quite peculiar for the videogame world. We are not talking about a few fast laps to the finish, but races lasting 3 hours and others even 24 hours. It is also a championship for true enthusiasts, having a mass appeal far inferior to the 1 Formula or to the generic "racing".

Watch out for tire pressure

The simulation aspect and the feel of the machines is amazing. There are 12 cars, all with their own feel and plenty of space to personalize the driving feeling. Each of us will find the car that best suits itself. I personally joined the Ferrari 488, after spending the first few hours with the Nissan GT-R Nismo and the Lamborghini Huracan.

The simulation is at high levels and I was particularly impressed by the tire and brake management, which react to temperature and pressure. After performing a pit stop, you will notice a noticeable lower road holding ability and a less consistent response. The weather conditions are also superbly simulated, like the layer of water that forms on the asphalt while it is raining. Also the circuit is going to change during the races, filling up with puddles and tire residues, elements that influence your performance in the race. The game also has a dynamic day / night cycle. Combined with dynamic weather, this allows endurance races to be truly varied.

Unfortunately, the game results difficult to approach for casual players or those who prefer a more arcade style. It is possible to regulate the level of realism, AI difficulty and driving aids, but great effort and expertise in driving is always required. Moreover the tutorial is practically non-existent, as well as detailed explanations on the various modifiable parameters of the cars. The game has a poor ability to summarize information, resulting most often difficult to read and understand.
The definitive experience is clearly guaranteed with the use of a steering wheel. The controller, as inevitable as it may be, penalizes it.

A race against yourself

As mentioned above, this type of championship is not based solely and exclusively on speed but also, and above all, on duration. Constancy therefore becomes the most important parameter, the ability to make numerous turns without ever making mistakes. Every choice to be made on the track must serve the purpose of making you last until the end. And all the unexpected are calibrated to keep the tension high during the race. From this point of view, the challenge is well calibrated, the objective clear and the player must really grow to always be in control. The mood is that even if you don't finish first, if you have a good race, you will feel the sensation of victory. Of having made it. To be grown up.

However, this challenge is the only core of the experience. All modes are similar. Career, Championship, free competition and special stages all have the same purpose: to make you race "in the same conditions". There are no different and unique driving experiences, like in other more broad spectrum racing games. If the experience bites you, you will lose hours and hours in your career, trying to improve your times and improve as a driver.

There is the online, but at the moment, forgive me the French, it's a bit of a poop. If you try to select the quick game option, you end up practically alone in the SPA circuit to run as fast as you can, with players who leave and come in continuously, creating an unpleasant experience. There is no online league, no competitive season. You can create your own server and then get organized in a way with friends, but if you try to thrill against other humans after hours spent training in single mode, you will be unhappy with the experience.

Assetto Corsa Competizione is built on the Unreal Engine 4, engine now famous for its flexibility. This translates into an excellent overall graphic performance and a commendable scalability, definitely better than the previous chapter that used a proprietary engine. Cars are made in great detail and the circuits are made from very accurate laser scans. The sound is majestic and the roar of the engines has something magical that recalls that primordial passion for cars that is in each of us.

But there are some shortcomings that make the nose turn upside down. The circuits are beautiful but, as soon as you stop, they look much uglier. They are made to accompany, not to be looked at. Some textures are in low resolution. The pit stop comes straight from 90 year games, with the car floating in the air and no man going to mount tires or refuel. In theory it should be a bug, watching from people on the internet luckier than me. But I couldn't solve it. Despite the period in Early Access, this Assetto Corsa Competizione didn't come out really clean from the testing phase.

Having played the PC version, I spend a few words on the performance of my machine. The game does not make large use of multicores. There is a master thread that occupies a single core from 80 to 100% and two auxiliary threads that load around the 50%. Despite this, I never noticed CPU-side bottlenecks on my Xeon e5 1650 and the GTX 970 of my set up ran the game on clean 60fps clean to high details. It runs well, in conclusion. The only costly aspect of the game is RAM. I have seen average uses around 10GB.

So, summing up, Assetto Corsa Competizione what is it? For who is it? This is the classic title for true fans of the specific genre: the GT3 races. Attention to detail and simulation will make fans passionate, while the more general public will be better off continuing to turn to more general titles. However, it must be said that, even for fans, the game is very thin and offers a single attraction, without adding anything else. Future upgrades will expand the cars and circuits, hopefully adding more variety and filing away numerous bugs and less refined aspects. For now, to the 1.01 version, I would recommend it only to those who are really prepared, that is, flying at hand.

Nicolae Locatelli - May 30, 2020
Nintendo Switch, despite the absence of a recent Direct, would seem to have several aces up its sleeve. Amazon France may have revealed a few. The games included in the catalog ...
News

Piermatteo Bruno - May 30, 2020
In the last few days, the VentureBeat analyst had predicted an imminent announcement of GTA VI, the highly anticipated new chapter of the historic Rockstar Games series, based on some ...