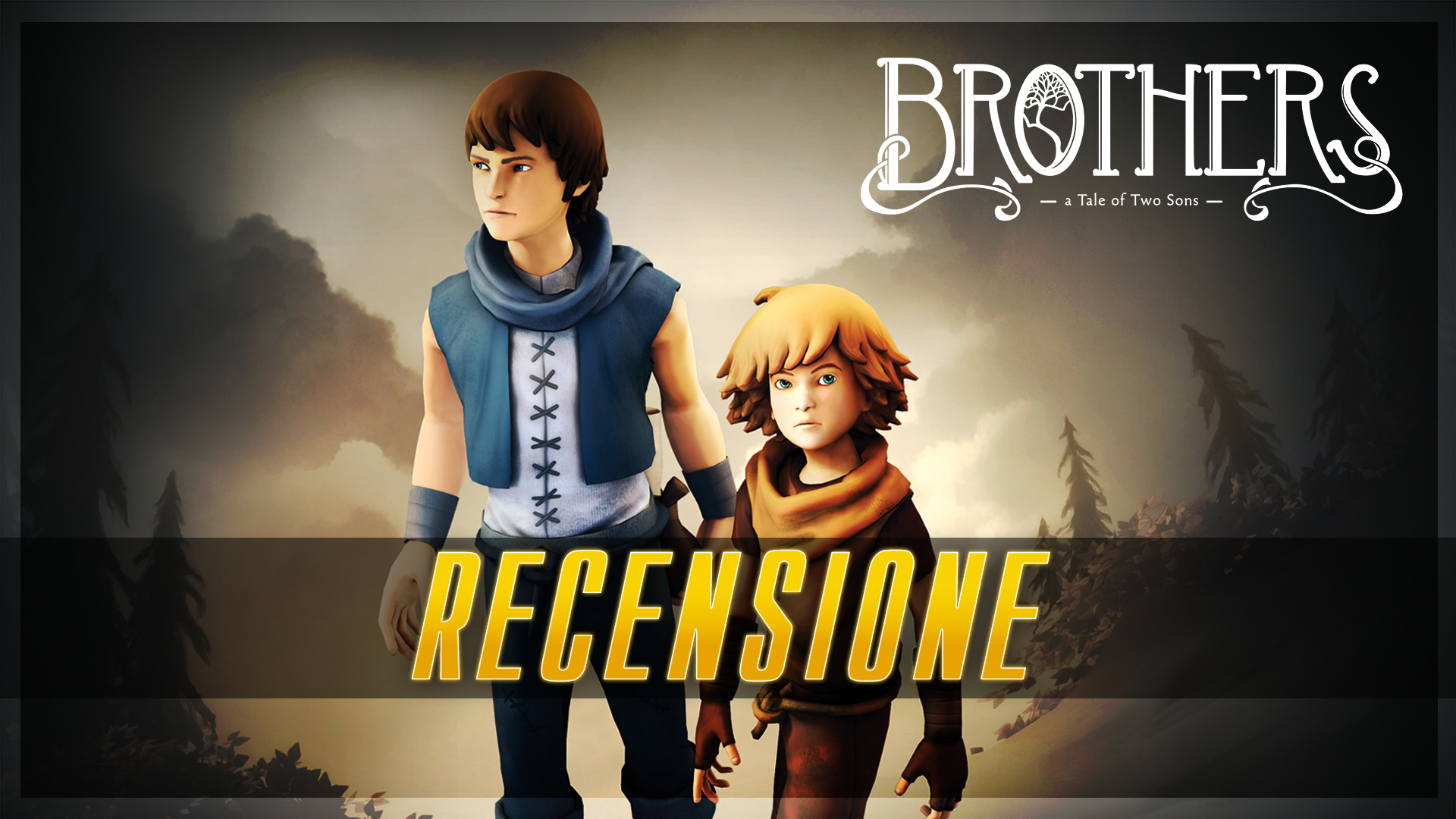 There are video games that tell a story with hours and hours of footage, others that hide the plot in choices to be made at the right time, thus linking the different events, then there is Brothers: A Tale of Two Sons, which tells a fairy tale simply by making us play.

The indie game developed by Starbreeze studios and directed by the Swedish director Josef fares succeeds, in the few hours it takes to get to see the credits, to completely overwhelm the player, and does so without ever forcing things, without giving time to those behind the screen to lay the controller to enjoy a movie, because the same game is the movie. A movie made up of real gameplay that excites us from beginning to end.

Brothers: A Tale of Two Sons tells the story of two motherless orphan brothers, the younger (true protagonist) and the eldest, who must embark on a journey in search of a miraculous medicine to cure a life-threatening disease father. So let's start at home to find out wonderful lands: initially everything seems normal, with hills, plains, fauna and flora typical of a northern landscape. Moving forward with the journey, however, we realize we are in a real fairy tale, from the first encounter with an Orc to mystical apparitions, with mythological creatures that make us live a dream.

In this puzzle adventure we are both brothers simultaneously and the control system is as simple as it is particular: the "left side" of our controller - analog and trigger - moves and allows the various actions (collect objects, operate levers, climb, etc.) to the older brother, while the analog and the right trigger are dedicated to the younger brother. Only two buttons per boy, but being able to control both with the analogs is not easy, especially in some sessions where you have to have great mind / finger coordination to avoid death.

In any case the difficulty of Brothers: A Tale of Two Sons always tends to be low and, unless errors due to some inaccuracy in the control system, completing the story is really affordable for everyone. This is absolutely not bad, indeed, given that the goal of the developers was to let us live a story, let us empathize with the two boys. Personally I think they have succeeded very well.

The story is told playing and the characters we meet, together with the protagonists themselves, speak with an invented language and there are no subtitles: it would therefore seem impossible to understand what we are talking about during the adventure, yet the facial expressions, the way of moving and the tonality of the voice they are able to perfectly characterize the characters, making them feel much closer than actually being two digital characters of a video game.

From the first minutes, by performing certain actions and interacting with the objects and characters we meet, we understand the character of the two brothers: the most cheerful, dreamy minor, the most shy, reflective and responsible major. Responsibility, the heart of this adventure. Throughout the game you feel so emotionally touched by certain events, which happen especially to the younger of the brothers, so that a sense of protection assails us for all the about three hours of play time. There are indeed times when the little brother finds himself in difficulty and it is our task to bring him to safety as only a parent or older brother can do.

The small however, as already said the true protagonist of the game, is never a ball and chain: the various puzzles are designed to be completed thanks to the collaboration of the two brothers, exploiting the abilities of both. Therefore, if the elder can count on strength, his height and ability to swim, the minor becomes useful with his lightness and the possibility of passing between the bars of cells and fissures of walls.

Of situations in Brothers: A Tale of Two Sons there are many, from the most "realistic" to the most fabulous, but what unites everything is a technical sector so simple, with polygonal models certainly not very elaborate, but treated in detail and with a art design that strikes the heart. Accomplice to these emotions are the shots and zooms studied ad hoc by the director: although the game is very guided, with a fake "open world" formed by preset paths, during the journey the horizon that shows us our goal is often framed , as well as areas visited a few minutes before and that give us the true feeling of progress, travel, achievement of the goal and departure from the past.

In addition to being a journey in the true sense of the word, in fact, Brothers: A Tale of Two Sons also represents a inner path for the younger brother that, given the events that take place during the course of the adventure, he finds himself much more mature once he returns home to his sick father, with abilities that initially belonged to his older brother.

Unfortunately I cannot speak too openly because I would risk making spoilers, albeit small ones, which would ruin an experience made almost exclusively of emotions and, trust me, in the last five minutes of the game if you really try many. But it is the whole journey that leads to experiencing certain sensations, to being moved, to laughing at certain situations: if you just put the video of the last five minutes of the game, you would understand what happened, but you wouldn't experience what you feel by controlling both brothers for the whole adventure, with the major protecting the child but finding strength at the same time to continue thanks to his brother, making himself strong on him.

Brothers: A Tale of Two Sons it certainly has flaws, including an impacting soundtrack but sometimes too present, as if you wanted to emphasize a moment that would be enough just silence, as well as a really low difficulty. But if the game is taken for what it is, that is an experience to live, then Starbreeze and Josef Fares will enter directly into your heart with a videogame fairy tale full of emotions.