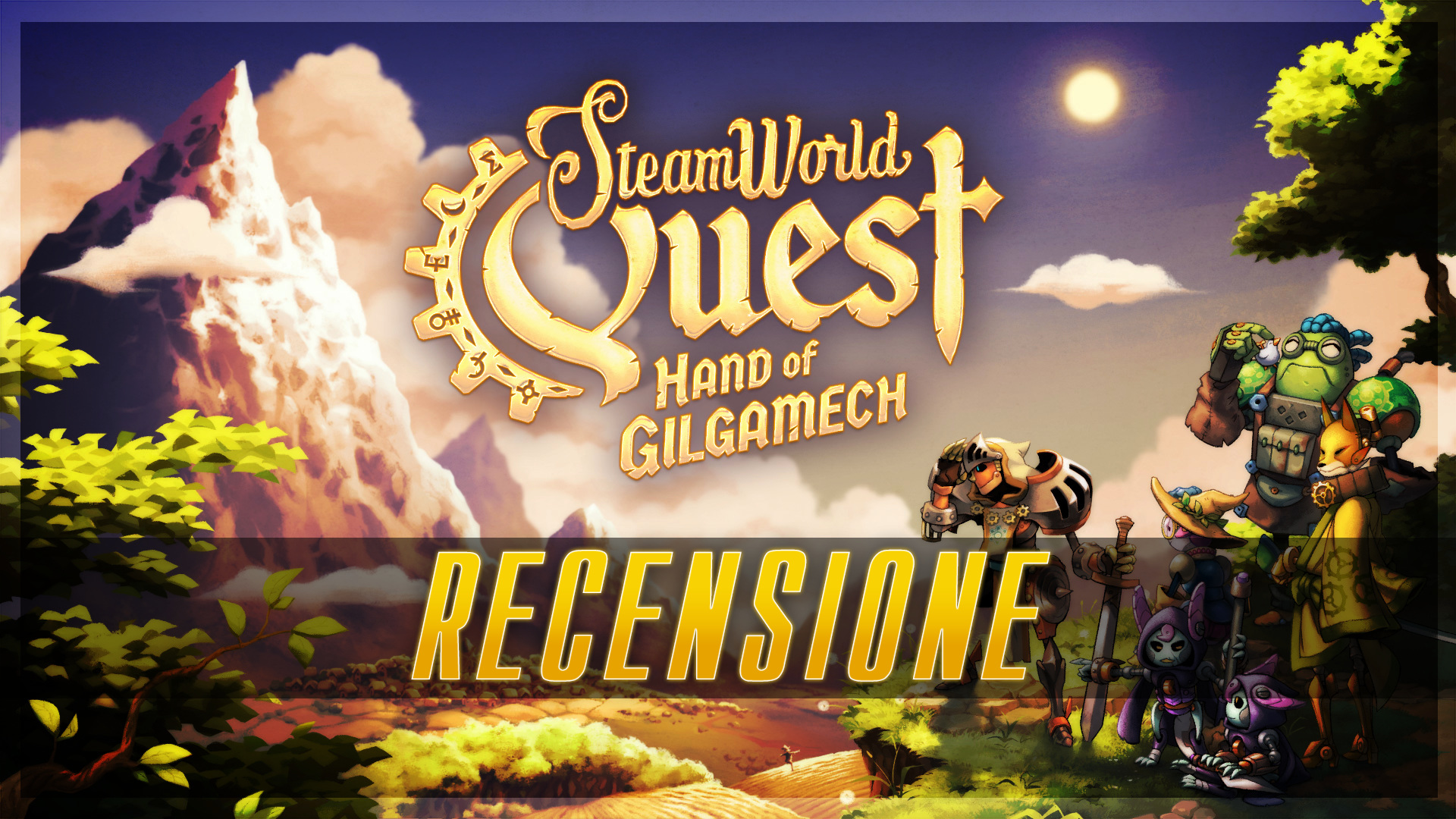 Steamworld Quest: Hand of Gilgamech is the last chapter of the franchise Steamworld, a little jewel that we fans keep hidden from the general public to enjoy its beauty.

The peculiarity of Steamworld is that of having given us titles of different kinds within the same setting, even if in different moments of time and Steamworld Quest continue this beautiful tradition, giving us an RPG with a very particular combat system, thanks to the use of cards, which winks at titles like Slay of the Spire, also coming on Nintendo Switch.

I WANT TO BECOME A HERO

Steamworld Quest abandons Far West settings and transports us to a fantasy world with steampunk connotations, given the robotic nature of the characters.

At our command we have Armilly, a warrior who pursues the myth of Gilgamech, a hero hailed on all the manuals she's mad about. His greatest dream is to enter the guild of heroes and be able to follow the exploits of his idol but, despite being pushed by good intentions, he cannot fulfill his wish.

One day, the army of the Nulla attacks the city where Armilly and Copernica, his inseparable and bespectacled friend, live and kidnaps all the members of the guild of heroes. Armilly sees this tragedy as an opportunity to assert his courage and part in the adventure with his friends. But what begins as a "simple" rescue mission will bring this group of adventurers quite improvised (which will not miss new additions as you progress through the game) to face a far greater threat.

It is clear that the story of Steamworld Quest is very simple, but no less exciting. However the birth of a new hero is something that always excites, all the more so if we decide the fate of the battle. Steamworld Quest has very light tones, with quite funny comic skits that, along with moments of great pathos, keep the player glued to the screen. Although the sequence of events is fairly predictable, the desire to see how the story continues is not missing.

The Steamworld Quest combat system is truly unique. Unlike many card games where the decks that come to be built become more and more consistent, in this game each of the 3 decks of the active party characters is always and only composed of 8 cards, neither one more nor one less.

At the beginning of the turn the player receives 6 cards chosen at random from among the 3 decks and it is possible to play the cards in any order, even if with some limitations. Some cards are in fact without cost, and playing them creates Steam Points that will be used to use the most powerful cards. Part of the strategic depth present in Steamworld Quest is already beginning to be seen from the resource management to create Steam Points and how to exploit them to the fullest. This management actually starts already from the construction of the deck, which can be modified at any time out of the battle, since it is necessary to perfectly balance the cards that generate Vapor Points and those that use them.

There is more strategic choices in the hands of the player the combo system which is basically of two types: the first provides that, once you have played three cards in a row from the same deck, the special ability of the relative character's weapon is activated. Depending on the weapon the effect changes and therefore it can be useful to keep all the weapons found during the adventure to have different special abilities at one's disposal. The second type of combo, on the other hand, is a bit more complicated to manage since, to activate the increased effect of some cards, it is necessary that the latter are necessarily played after specific cards from another character's deck. In these cases, the activation of the weapon is obviously waived, but usually the increased effects are powerful enough to compensate for this loss.

What really amazes in Steamworld Quest is the customization of the various decks, as each character does not have a single specific build to use and, once new cards are acquired, crafted or upgraded, it is You can create interesting combinations among the various heroes available to us.

Just to make a very simple example (and easily realizable in the first hours of play), Armilly starts with cards clearly from melee, but it is possible after a short time to create a build that makes it a fearsome fire magician, managing to enter into synergy with the skills of Copernica. Galleo, the third character who joins the initial party, can be played as Tank, Healer, Physical DPS or even water magician.

It becomes very clear how much of the fun of Steamworld Quest both to constantly change the active characters and their decks to try to find always new combinations and synergies as we continue in our adventure.

Similarly to the heroes, the enemies also use the same combat system with Steam Points and cards, but while the "basic" enemies use only one action in turn, making the fight fairly simple even at the most elevating difficulty, the "elites" make the much more interesting things, leading the player to carefully choose the strategy and use of the cards even on “normal” difficulty. Fortunately, the game is not very punitive and allows us to start the adventure from the last statue of the hero found, which functions as a refreshment and rescue point.

Steamworld Quest it is a title that by budget cannot certainly compete with the great giants of RPG, but this does not mean that the game is worth less than much more publicized titles. The characters are very well designed and characterized, and even the soundtrack does its job very well. If we really want to find the hair in the egg in an indie production of very high invoice, we cannot fail to mention the backdrops (not very accurate and detailed) and a longevity not excellent, therefore hoping for the release of DLC or additional content to be able to make the most of the decks "end game".

Whether you are a fan of RPG or card game (better if both), or simple novices of the genre, Steamworld Quest is a game that I highly recommend, also considering the cost of only € 24,99 on the Nintendo eShop.

Andrea Schietroma - February 28 2021
The success of Apex Legends does not seem to diminish over time, on the contrary: the battle royale created by Respawn Entertainment has registered its new ...
News

Andrea Schietroma - February 28 2021
E3 2021 will not be held in the form of a live event. What was rather predictable due to the organizational complications dictated by the pandemic, ...