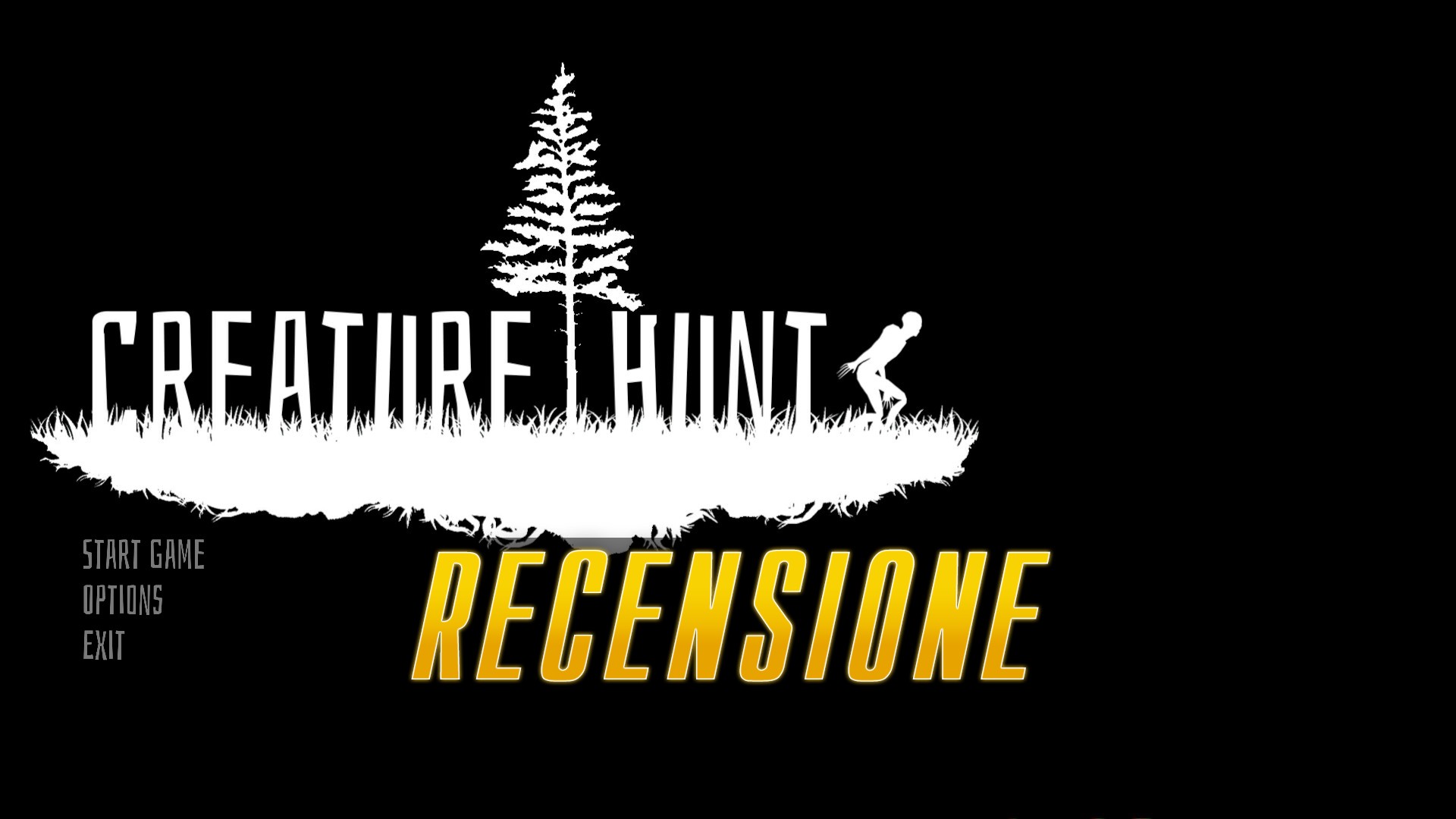 Do you know those broadcasts on DMAX focused on the hunt for ghosts, spirits, poltergeists, aliens, occult presences of old spinster deaths because you are spiked with the Singer's needle by piercing your saphenous vein? And looking for which there are four truzzi of America with the help of high sensitivity infrared cameras in the middle of a thick forest of Wyoming? To all this add a cincinnino of the episode of Mystery on the Area 51 and well, there is a good chance that you have understood what this consists of Creature Hunt.

What am I doing in a forest forgotten by God and by men?

Very minimal game already from the menu: play, options, exit. STOP. From the contents and the weight (only 1,6 GB) quite small, but certainly not bad, indeed. A title that nNot even a case of an octogenarian heart can cause fear, except perhaps for some faraway barking quite horrifying, but which in the long run would seem to recall a dingo with hoarseness, vaguely resembling the drowner of The Witcher 3. But only if equipped with a decent dose of imagination.
Once grappling with the home screen, all you have to do is press OK on Play game and, without any kind of preamble, explanation, intro, story or anything else, you are catapulted into a dependence that is not open to that door. But fear not, it is your loft immersed in the spectral green where you will find: weapons, torch, medical kit on the bathroom sink, ammunition, tablet with the map, GPS and positioning on your desktop PC of "home" and many cameras in 4K ( and stica) with a tripod, that not even an electronics hypermarket or Willy, the janitor of the Simpsons, when they pinched him to do the voyeur of the couple.

In your hut you have to collect everything you can loot, going around far and wide (including the bathroom) because for the purpose of finding those "you don't know what" everything can be useful. Along with all this nécessaire worthy of a photo studio with a high portfolio, there are outdoor camping lights and a pick-up, your best friend. In fact, with your beautiful off-road vehicle made in the USA, tablet in hand, cross the entire map and accurately position the cameras at your disposal, so as to be able to identify the presence of possible mutants on your computer tabular.

Once you have identified the "creeping monsters" that are very similar to the "Mars Attack" aliens, you must of course face them with a pistol and a carbine, but try to skimp on the ammunition, because, even if you find enough in your loft, long is the way, despite a map that turns out to be rather small (for an 1,6 gb of stuff you wanted, GTA 5?). Purpose of the game, which consists of the single player component and stop, end of the race, is kill these dangerous creatures shrewd like a quokka and perhaps remotely related to the unwary alien who was then the victim of the most far-flung autopsy in the history of TV a decade ago. All with the aid of a pick-up that has high-beam headlights with a number of lumens equal to those of cemetery lights and a torch that illuminates a palm from its nose, in the middle of the most complete darkness of a ghostly forest. The latter turns out to be perhaps the most interesting component of the game for pathos and atmosphere, disregarded and disillusioned by a gameplay taken for granted and little cared for.

Don't go into the woods alone

Graphically it's not bad: polygonal details and patterns in some ways remind us of Condemned 2, and the lens flare effect of the torch on the floors and on the walls is particularly appreciable. For the rest, forest textures in the first place, although in Unreal Engine 4, the title leaves a lot to be desired. The game also has several bugs scattered here and there. For example, in areas where there are more light sources, such as pick-up position lights, the exterior camping lights of your home and so on, there is a kind of strobe effect that collides with them, making appear the beams of light intermittently: it is not made specifically for questions of pathos, no, unfortunately. The effects of the weapons are, to say the least, ridiculous, since only the shot is heard but neither the bullet, nor the blast of the blow, nor the entry hole of the case, nor particle effects of any kind, is seen. idea of ​​how much the aforementioned game was made somewhat at the carlona.

In Creature Hunt the optimization is not the best, in fact in addition to needing a lot of power under the shell of your case, sometimes it is also afflicted by an annoying non-native motion blur effect, without having any possibility to act on advanced graphic settings if not for what concerns resolution and level of detail, the latter scalable to your liking but only with a simple lever as an audio volume. There are also numerous bugs in the composition of polygonal models, especially in the presence of close-up objects with numerous details, such as the carvings of wooden strips. The audio of the car is a wave in a loop with an enchanted effect, and to try to understand which keys to use to do anything, given the absence of any option that clarifies the matter, you are forced to be a diviner between the keys of your keyboard, especially for what concerns the steering wheel controls of your vehicle. Understanding how it turns on the latter borders on the tragicomedy.

I want to believe

Creature Hunt could be fun, especially when searching for unspecified entities, but without a story, without a minimum of lore in reference to the aliens mentioned above, your search turns out to be like a shooting at the amusement park. Too small in everything is to say little, and at the level of playability it would have been better to put a blank map in the lower left or an ics map, to then see on the tablet if our cameras have done their duty or not. Using unison tablet, weapons and running under the "threat" of the Martian grunts scattered around the forest is certainly not the best. The idea was good and remembers 90 sci-fi years a lot, especially for the monster-style settings of the USA swamp, but the creation of Creative Hunt is far too spartan and sparagnina to reach the goal. Too many vital aspects left out or omitted altogether, such as the lack of a multiplayer mode and the absence of a plot, which in indies often represents the real strength. The bugs entertain you and not a little, such as aliens who sometimes run empty like a treadmill without actually moving a millimeter.
Ultimately, Creature Hunt could be admirable as well as quite entertaining, but in light of the fact that it was made more with the feet of the alien, it is a title that enjoy not thanks to the gameplay, but thanks to the bugs or the absurd interactions present in-game.