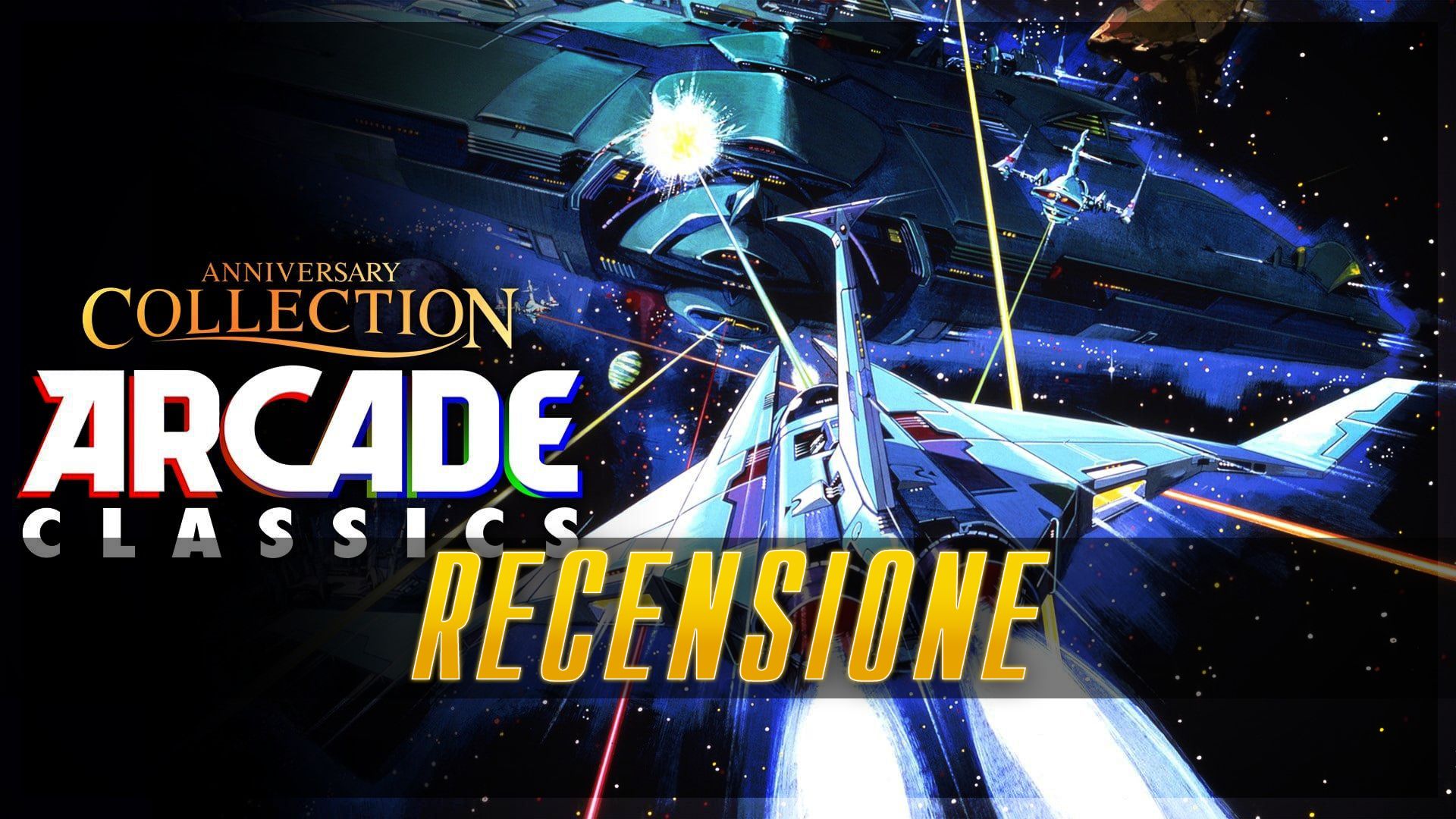 Konami Arcade Classic Anniversary Collection is a collection of titles for coin-ups that unites some of the main titles released during the distant 80 years, focusing in particular on the genre Shoot-em-up, very popular at that time.

Within this collection, published to begin the celebration of the 50 years of activity of Konami, there are eight titles, some better known, like the two Gradius and Scramble, and others a little less (to say the least) like Haunted Castle.

And it is precisely from one of these titles that I want to start. We are in the 1981 and the world of 2D shoot-em-ups is about to be revolutionized thanks to Scramble. The game of Konami was a real bomb for the time, given that at that time the shoot-em-ups usually had a fixed screen, like the famous Space Invaders, and you had to destroy the enemy spaceships that appeared on screen.

Scramble was one of the first titles to present a continuous level structure, feature then became the basis of all subsequent titles of the genre. In addition, the game had a technical section, obviously commensurate with the year of release, which was truly remarkable. Moreover he was very fast and adrenaline-fueled, with enemies ready to get out from everywhere to try to destroy us. Another peculiarity of Scramble was to have a double type of fire, with bullets that traveled horizontally and bombs that were dropped downwards, and that followed very difficult parabolic trajectories to master.

In all this the player, in addition to having to avoid spaceships and enemy shots, also had to manage the tank of the spaceship at our controls and "refuel" by hitting scattered gas deposits on the screen. The set of all these factors makes Scramble a great classic of the genre, which may not have had the media echo of more famous titles like R-Type or the same Gradius present in this Konami Arcade Classic Anniversary Collection, but to which everyone has drawn something from the development of their titles in the years to come.

Certainly the most resonant names of this Collection are those of the two Gradius, known to us by the name of Nemesis and Vulcan Venture. It is certainly not the first time they are released in some compilations (just think of the Gradius Collection for PlayStation Portable), but for valid reasons: for years they have been considered among the most important titles in the world of horizontal scrolling shoot-em-ups, with a very interesting power-up system that gave the games an additional strategic depth.

Within this Konami Arcade Classic Anniversary Collection it is also present Life Force, also known by the name of salamander, spin-off of the series Gradius. The peculiarity of this title, apart from the decidedly peculiar setting, given that we are inside living beings, is the mixture of horizontal and vertical sections and a co-op mode for two players.

While perhaps not the most well-known game of this collection, salamander it's really his top title, since the mechanics seen inside were then taken up in the future by the other titles in the Gradius series and beyond.

Three other titles from the world of shoot-em-ups await us inside the Konami Arcade Classic Anniversary Collection: I'm Thunder Cross, TwinBee and Typhoon. I would be lying to you if I told you that I knew perfectly well what games they were, given that, despite having years and years of afternoons spent in the arcade on my shoulders, I have never seen any of the three titles. Among these three games, the one that certainly strikes the eye the most is Typhoon, thanks to a remarkable technical effort with some really well done stages in 3D, considering also the year of release, the 1987.

Dulcis in fundo (actually not at all sweet) we have Haunted Castle, clone failed of Castlevania. The absurd thing is that Castlevania is a title of the same Konami and it seems surreal that they managed to create a game based on their own title and do such a low level job. Even here we talk about a game I had never heard of before having this in my hands Konami Arcade Classic Anniversary Collection... and there was a reason.

As often happens in collections, we also have a "Book Section"Where we can find so much information and curiosity about the realization of the 8 titles inside Konami Arcade Classic Anniversary Collection. Porting was carried out by Hamster Corporation and brought us back the games in their original version to 4: 3, exactly as they had been designed at the time, although it must be said that they did not do an exceptional optimization job, given that some slowdowns may occur in some of the titles something rather absurd when thinking about the hardware they run on.

Konami Arcade Classic Anniversary Collection could have contained within it other software house titles that can truly be defined as "classical" as Frogger, Rush'n'Attack, known to us as Green Beret, one of my favorite games of those years, or the timeless Track'n'Field, without disturbing other sacred monsters like Contra e Castlevania that will have dedicated collections; instead they preferred to focus on the shoot-em-up genre by inserting Haunted Castle in a completely random way which, besides not belonging to the genre, is also objectively a poorly realized game.

The great advantage of this Collection is however that of giving the nostalgic player the possibility of replaying with titles of a certain thickness such as the two Gradius, but above all to know his spin-off, Salamander, which certainly deserves the MVP palm of the Arcade Classics Anniversary Collection. Scramble demonstrates all his life 38, but some of his features have become the norm for games Shoot-em-up, up to the discovery of Typhoon and to the surprise of his splendid 3D stages, made over 30 years ago.

Konami Arcade Classic Anniversary Collection is purchasable in Nintendo eShop for 19,99 €, perhaps a bit high for the price compared to the "classics" presented.