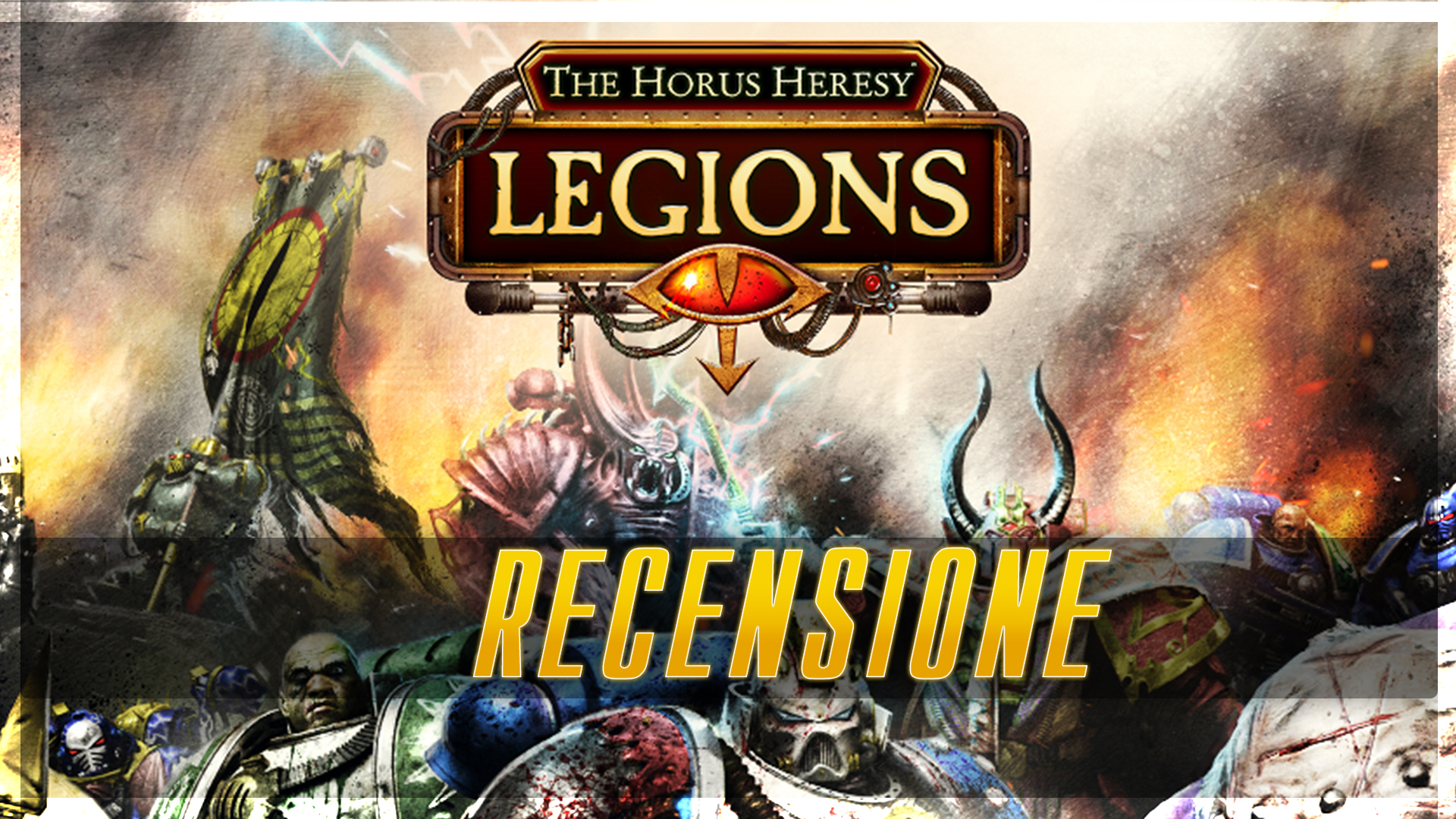 "Horus was weak. Horus was a fool. He held the entire galaxy in his fist and let it escape. (Abaddon the Destroyer). "

The world of Warhammer 40k was born in the far 1987, as the Sci-Fi "rib" of Warhammer Fantasy, one of the three-dimensional wargame most famous ever. Since then the world of Warhammer 40k has expanded enormously, to include various fields including role-playing games, video games and even literature, with a series of novels that expand the "lore" already present in the codex (dedicated game manuals to the various breeds present in the game of miniatures).

To find the first videogame title dedicated to the Warhammer 40k world we have to go back to the 1996 when Space Crusade was released on PC. Since then, about twenty titles based on the WH40k license have been created, but if in the past we almost always had strategic games, with Horus Heresy: Legions for the first time we enter the world of card games.

Thanks to Hearthstone first and MTG: Arena now, the digital card game genre is experiencing a golden moment which is why Games Workshop and Everguild LTD. have decided to try their hand at this genre with Horus Heresy: Legions.

Right from the start it is clear that Horus Heresy: Legions is the main source of inspiration Hearthstone. In fact, those who know the Blizzard card game immediately notice that the system for casting spells is perfectly the same. Each card has a casting cost, and the energy needed to use them increases by one each turn. The only difference is that in Horus Heresy we start with two and there are some cards that, once on the ground, can make use of energy to be able to activate special abilities.

Also the size of the deck is inspired by Hearthstone, with 30 card decks and up to two copies per card, except for the legendary cards. Not happy, the developers of Horus Heresy have adopted a combat system very similar to that of Hearthstone, with units that present, in addition to the launch cost and any special abilities, a value of strength and health. Fighting each other, the damage remains between turns and therefore it is possible to destroy an opposing troop with multiple attacks in the same turn or in different turns.

The two big news are the presence of abilities activated by the cards in the field and the Warlord. Many cards, once played, can choose in their turn whether to attack or use their ability, usually paying an activation cost with the energy available for the turn. These skills are obviously of the most varied types, but it is fundamental to note that for those concerning damage the units do not receive the "return fire"Of the adversary, thus allowing to somehow be able to attack anyone, also avoiding any protective troops, without suffering damage.

The Warlords instead are unique cards, linked to the big names of the Warhammer 40k lore. These units are those around which we build our deck and represent the player on the battlefield. In fact, the goal is to bring the health of the opponent Warlord to zero, thus decreeing the victory of the game. Unlike Hearthstone where the player chose the class and "commanded" his troops away from the field, in Horus Heresy the Warlord is really an active part of the battle, since he fights and suffers damage in the exact same way as the other units.

There are three game modes: practice, ranked and event. If the first two are fairly obvious, you must spend two words for the event mode. By paying one or ten event tickets, obtainable from cash desks or missions, it is possible to enter a game where we are given the opportunity to choose a Warlord from the four available. Once chosen, we are given a preconstructed deck with which we must try to match as many victories as possible. Every two wins, up to a maximum of twelve consecutive, we get an upgrade in the cash box we open at the end of the event, which ends when we reach the three defeats or the twelve victories in a row.

Horus Heresy's economy is enough "F2P Friendly", with mixed rewards of cards and coins, the latter useful for buying new crates. The crates have a content of four common cards and one rare, with the probability of finding an epic equal to 20%, while for the legendaries this value should be around 5%. Also on Horus Heresy there is a "Pity timer" of thirty boxes, beyond which the legendary is insured. It is also possible to buy single cards with the other currency of the game, gems, with costs that are very reminiscent of Hearthstone (20, 100, 400, 1600). It is also available to players to subscribe to a VIP subscription which provides bonuses on the daily boxes and on Event points at a cost of 5 euros per week.

From a technical point of view, Horus Heresy shows so many limits, especially in terms of graphics, where the cards do not stand out for their beauty and clean design. On the other hand, we must point out the fact that each Warlord is dubbed and use typical phrases taken from the Roman world of Warhammer 40k, a nice bonus for fans. Unfortunately the background soundtrack is very repetitive, a defect that led me to disable it within ten minutes. The game is also completely translated into Italian, so it is easily accessible even by those who do not perfectly chew English.

Regarding the matchmaking to report the bot option. In fact, by activating this mode, it is possible if there are no players available at the moment, dealing with bots, drastically reducing the waiting time for the selection of the opponent. Considering the large number of players, certainly a necessary and very intelligent move.

Horus Heresy: Legions draws too much from Hearthstone, but that's not a bad game. In fact, the fact of using a license as important as that of Warhammer 40k, it provides a certain charm to the eyes of enthusiasts. Furthermore the presence of the Warlord directly on the field and the use of abilities activated by the units provides that minimal strategic variety with respect to the Blizzard title, allowing it not to be a clone at the 100% of Hearthstone.

The gambling economy, oddly considering the genre, is not too punitive for the F2P player, allowing you to build and play at a good level even without spending a single euro in the shop. What is certainly wrong is the technical sector, with a visual impact definitely not great and a soundtrack and sound effects that are too repetitive.

The game is available on Steam, for free, as by now the practice for all digital card games.