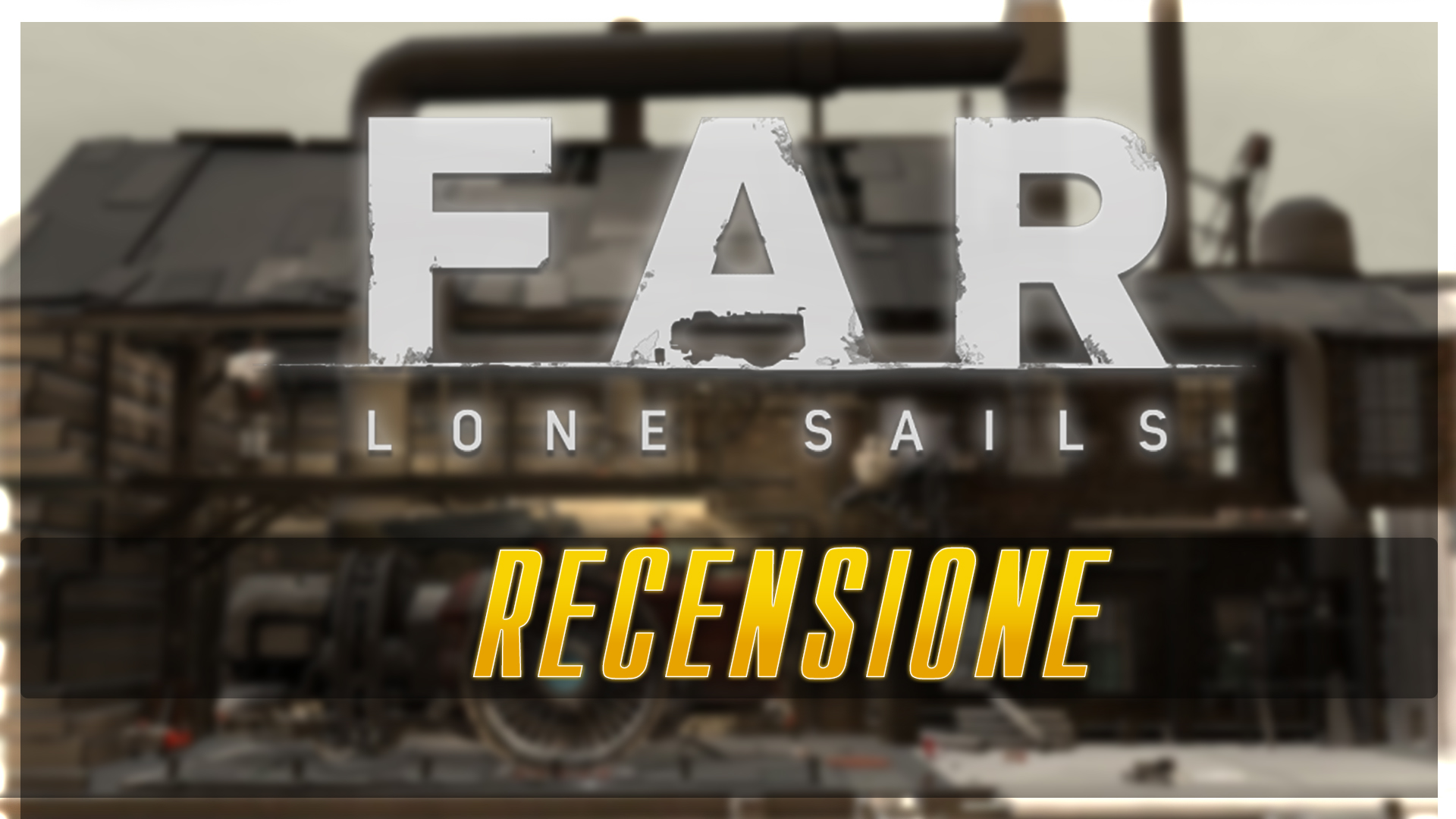 A world in ruins, an extinct human race, a boundless desert and a steampunk locomotive, these are the elements that immediately catch the eye in FAR: Lone Sails, the first title of the independent Swiss team Okomotive, which has already received international awards, and for excellent reasons.

Despite the theme of journey is it perhaps one of the topos more used and abused, in literature as in cinema, in video games and in any media you can think of, in FAR: Lone Sails everything tastes different. The journey of our protagonist dressed in red has no destination or destination, and is not even running away from some threat. It is a pure and innocent exploration, of a world that seems to have a story to tell, but without any life form that can communicate with us. 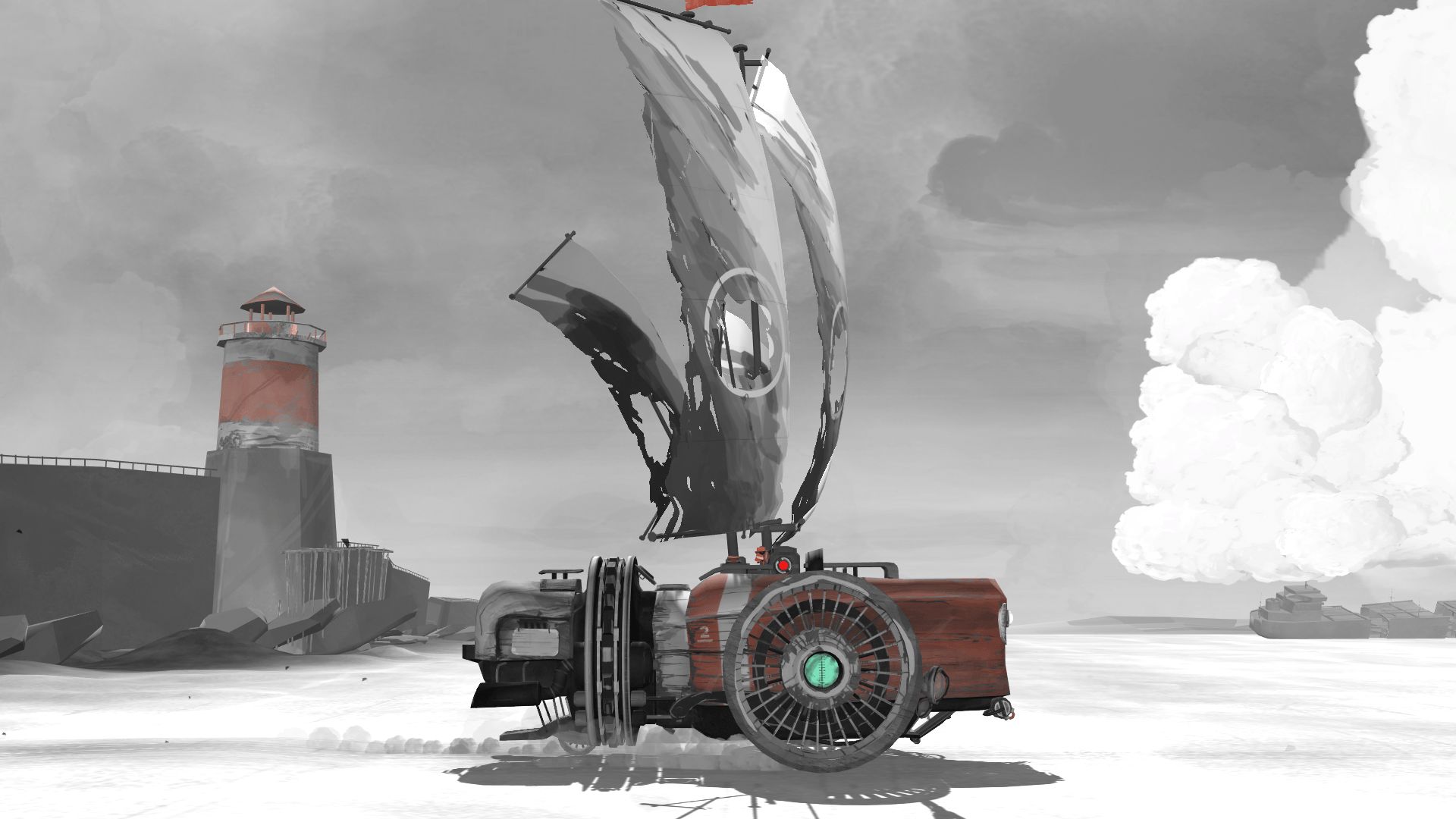 Along the lines of titles such as Limbo e Journey, the atmosphere is the cornerstone of this work and the gameplay, if you can call it that, it becomes almost a mere accessory to this moving picture. As soon as we start the game we immediately find ourselves checking out our little unnamed protagonist, who from her father's grave begins to walk home, in a peaceful silence accompanied by sporadic piano notes. No cutscenes, no tutorials, FAR: Lone Sails is one discovery in continuous evolution. The only commands we find ourselves using in the course of the adventure are the jump and the input to pick up the objects. So in FAR, then, is it played? The answer is without a doubt Yup, and it's up to us to understand how this strange works vessel which bequeathed us perhaps the only other person left on the planet. This steampunk ship is an extension of our own body, on which we depend, and which in turn depends on us: for maintenance, refueling, and upgrades. The progress of the game takes place in fact almost everything inside our vehicle, which constantly needs our attention to continue without hitch through the desolate land of what was perhaps once the Earth. 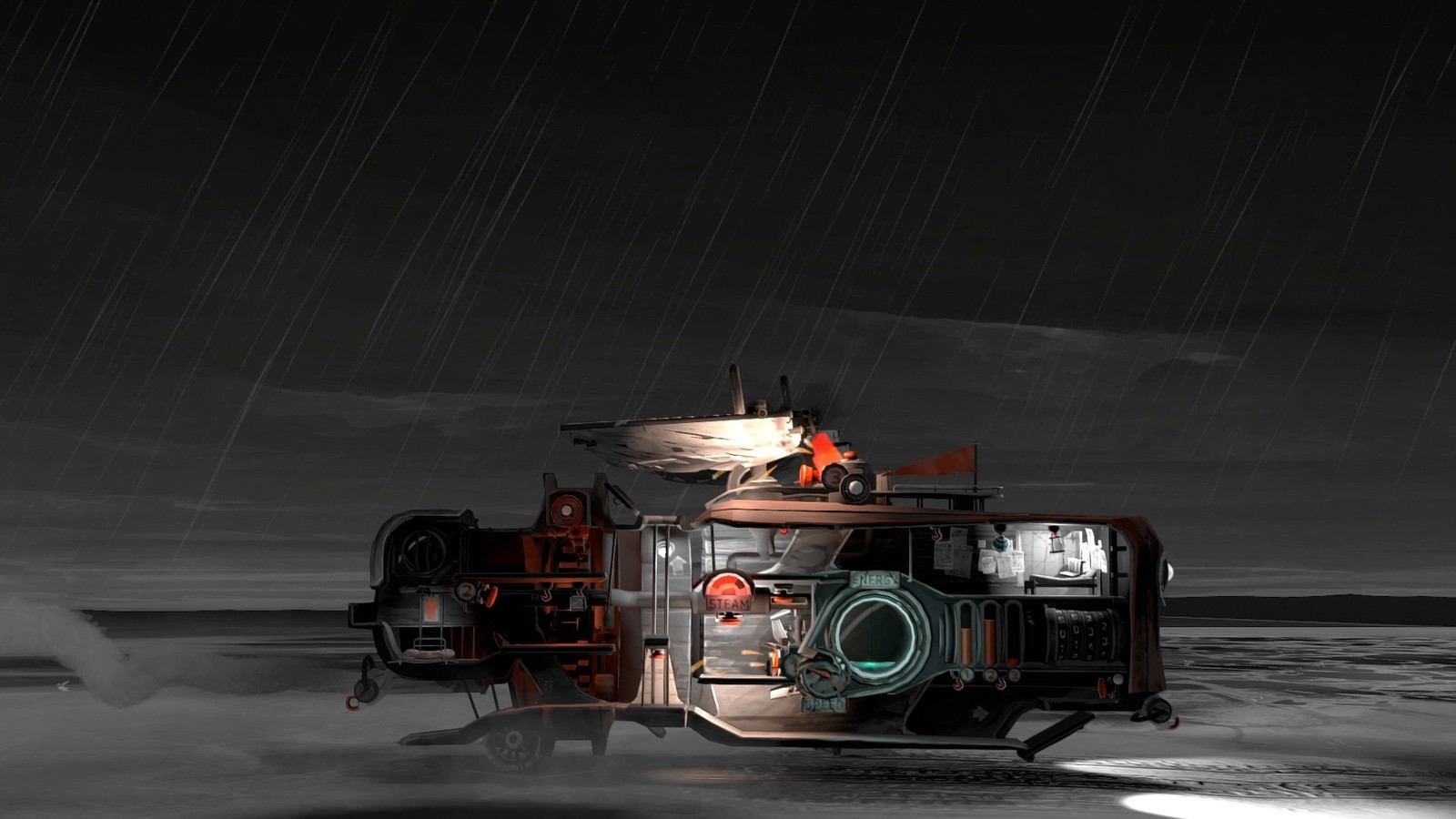 FAR: Lone Sails is classified as a puzzle / platform in 2D, but hardly find real difficulty in the puzzles that the game puts in front of you. The title is not and does not want to be a puzzle game. The situations to be solved during our adventure are simple and immediate, and the whole has as its ultimate goal to tell a story, not to make you brainstorm with intricate riddles. As for the "management" part of our locomotive, even here we are on very basic levels: controlling the engine, explaining the sails, avoiding overheating, all actions that do not lead to game over in the case of mistakes, but that help us to immerse ourselves in the mood of the game. Despite the extreme simplicity, we really feel like little navigators in our interior, which also represents our home, and in the end also our only friend.

Post-apocalyptic foreshortenings are perhaps the most imprinted element in the mind after playing FAR. The shots of wide field (and very wide) present during the entire duration of the game accompany the horizontal scrolling of the landscape as they were moving paintings. It is as if during the entire duration of the adventure we were inside an art gallery, with works in watercolor and oil flowing under our eyes. Paintings in soft colors, with a desaturated color palette in the background, but with pastel colors when the sun rises: everything is designed to relax the player, who at that moment becomes also and above all viewer of this work of high artistic caliber. The game also makes us live sections at night, which in such a desolate and desert world could almost frighten the player, but as the title description itself shows, it is a post-apocalyptic environment without zombies or monsters: you are alone you and your vehicle against the boundless nothingness. During our game we have nothing to fear, if not sporadic atmospheric events that can hit our vehicle. 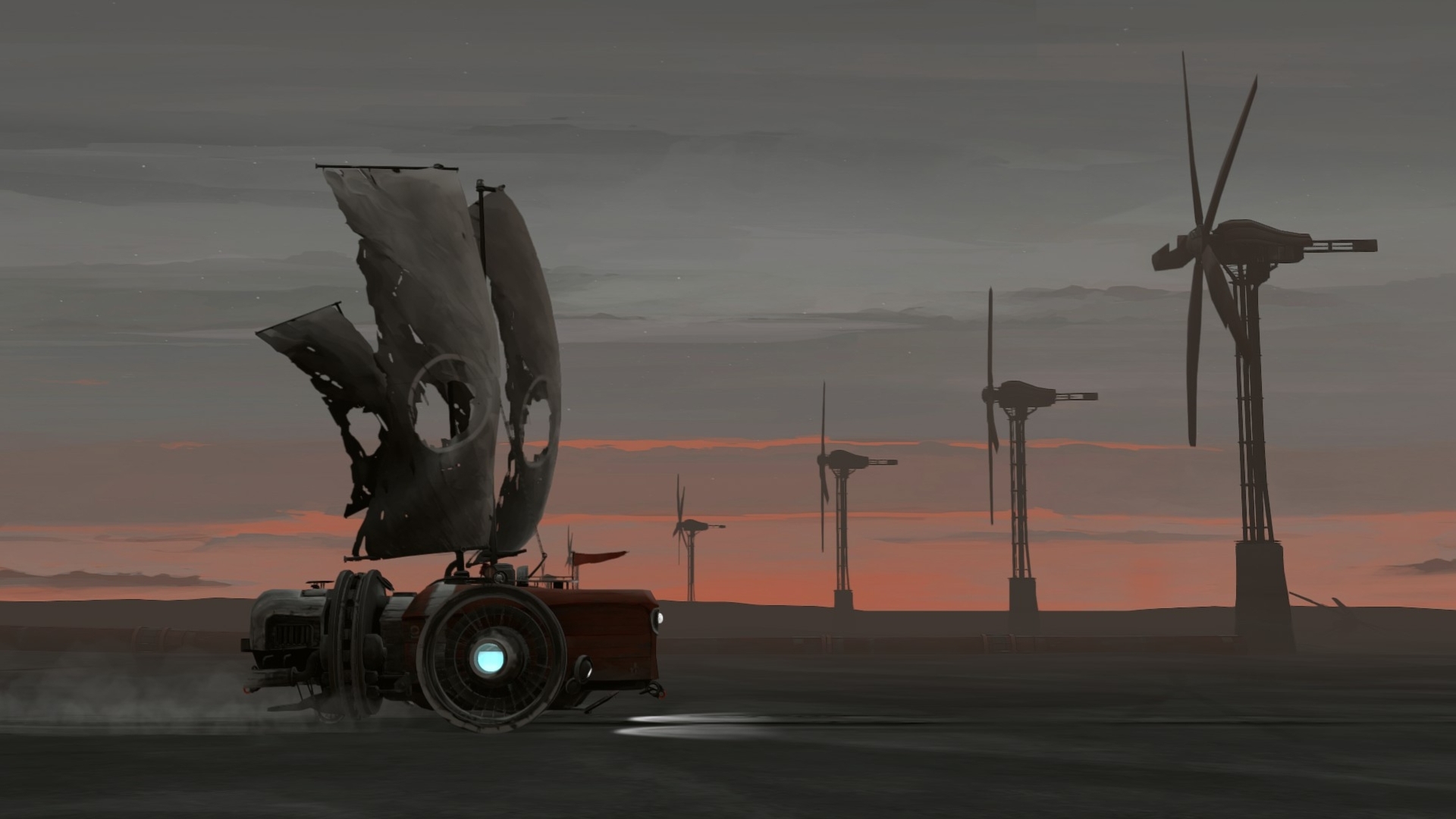 In a title with a design so inspired, one could certainly not miss a audio compartment of equal standing. The soundtrack accompanies every different game situation with never invasive music, but rather amplifies the mood that reigns in FAR. The accompaniments are of a few strings, a few guitars and a piano: everything is reduced to the essentials, but cared for down to the smallest detail. A praise also goes to the audio effects, steam sounds and gears that give a steampunk atmosphere, which combined with the sound of rain or hail, return a sweetly melancholy air to our journey. 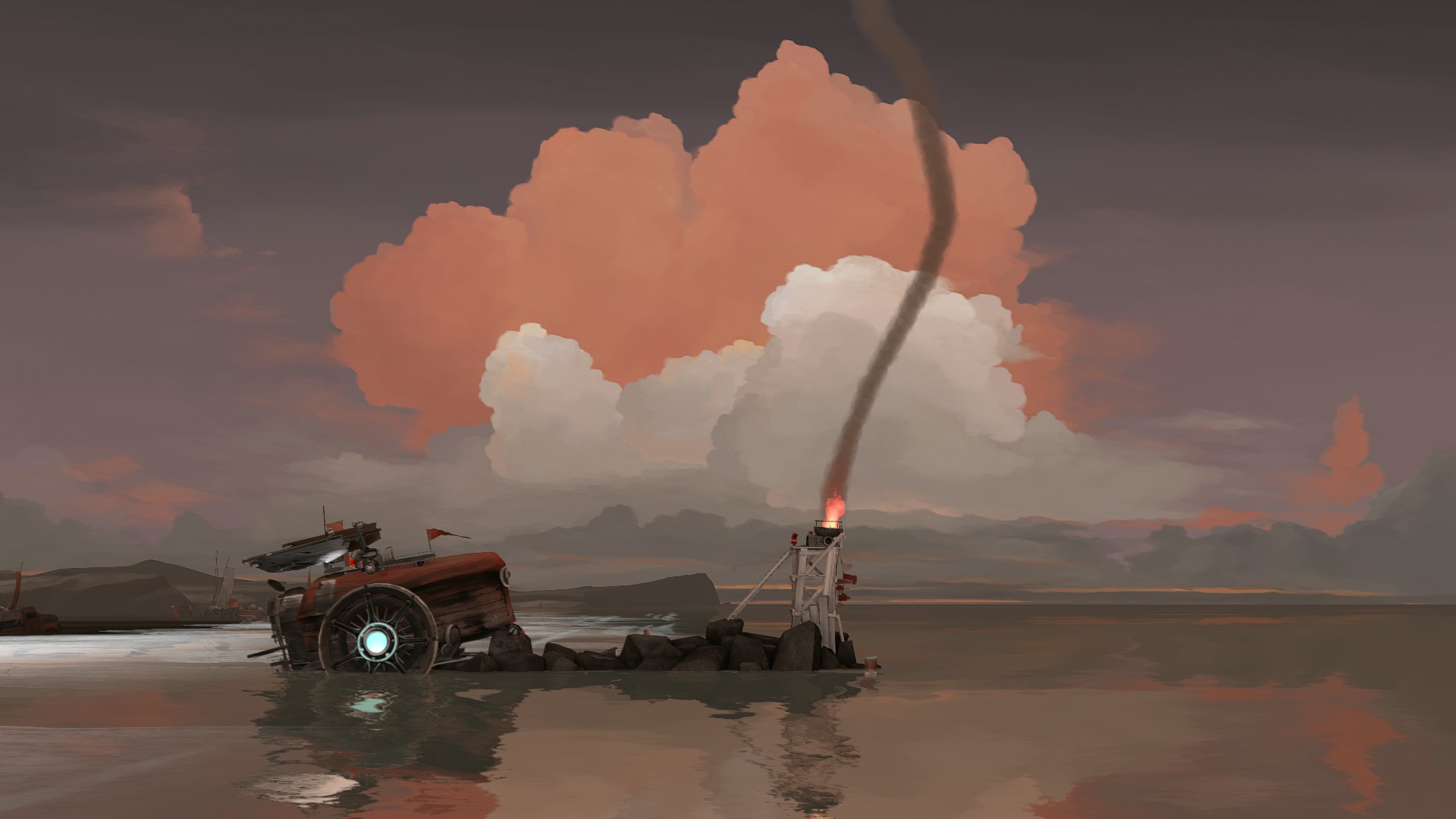 Finally, FAR: Lone Sails it is literally a small indie pearl that I absolutely recommend to recover. It is indeed a title that manages to reach the hearts of even the least accustomed players in this type of adventure. The only real flaw in the game is his longevity: to finish the whole adventure in fact you don't need that little more than two hours, and the replay value is practically zero, unless we count a second run to unlock all the goals. This could therefore turn up their noses at those who expect a demanding title and on which to spend many hours, but FAR is none of this. The ultimate goal of the game is indeed to tell a good story and let the player / viewer experience, to show once again that the medium of video game has so many faces, and this is undoubtedly one of his faces more poetic.

Burnout Paradise Remastered will not have micro transactions