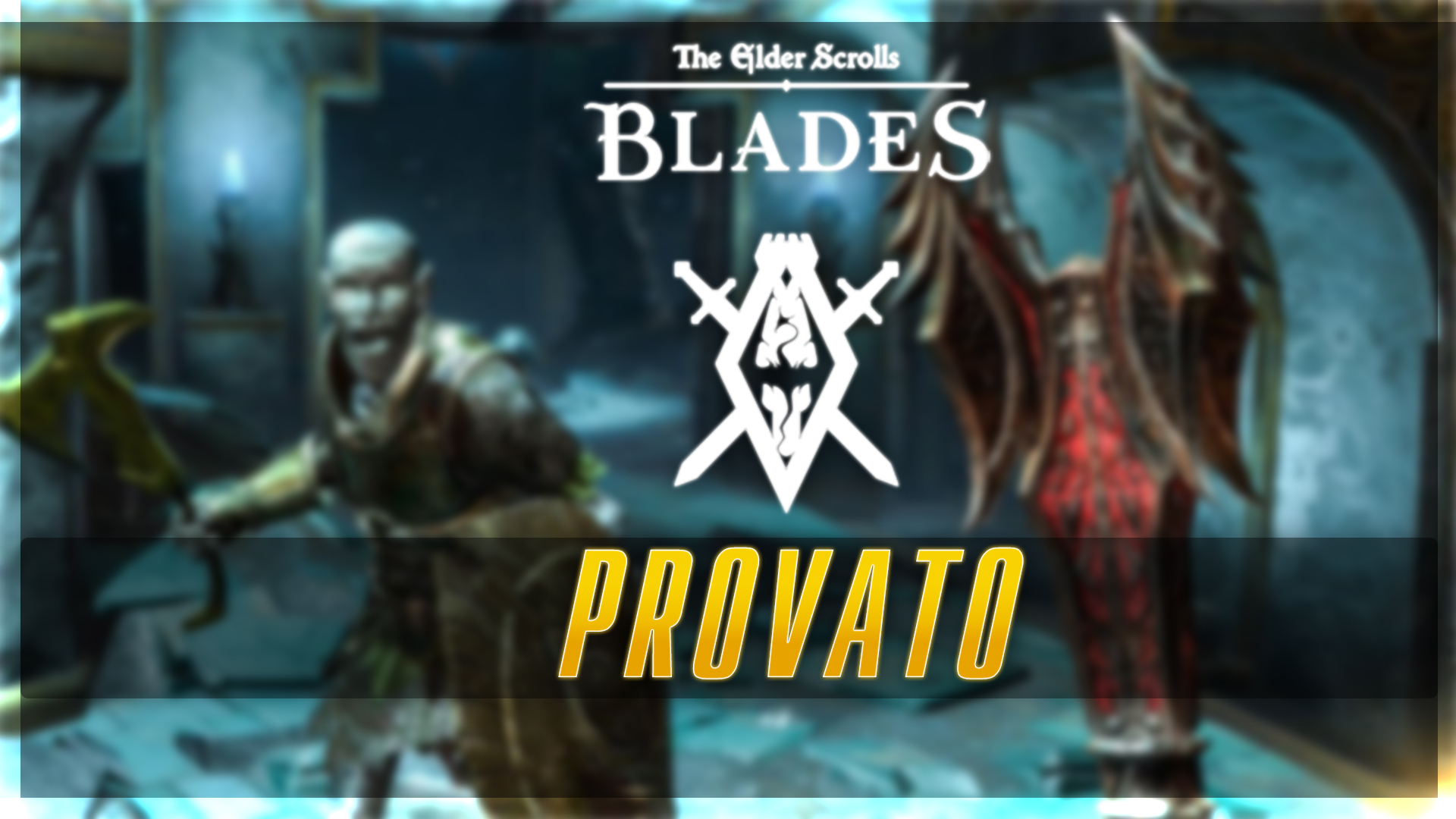 Announced like a bolt from the blue during the E3 2018, The Elder Scrolls: Blades is the first real experiment of Bethesda concerning the mobile world - excluding the ciofeca of The Elder Scrolls IV: Oblivion by Vir2L Studios, practically unknown to most. Of course, the news may not have gone down to the majority of players, still not very accustomed to mobile gaming if they weren't really against this world. Many in fact still consider it the preserve of Candy Crush and fifty-year-olds who do not know how to lower the volume of the device while on public transport. I have news for you: mobile gaming exists and will always be bigger, make peace with yourself. Of course Bethesda didn't want to miss out on the chance to jump into the most profitable market and did it in style, with an announcement on the stage of her conference at E3 regarding a spin-off of her most famous saga. And shortly after he announced he was working on a new main chapter showing a splendid video full of ... nothing. (Do you understand Blizzard? I am very happy to have Diablo on the phone but if you also said you were working on a new Diablo main, without giving dates or information about it, you wouldn't get the storm of criticism that came to you!

The game was released a few days ago on Android and iOS in early access. The people who carried out the registration on the official website they can start playing based on the availability of the servers provided by the software house. I have had the opportunity to access it for a couple of days, and here I tell you about my first impressions of the title.

I start by saying that I got to try the game on a iPhone XS Max it's a iPad 2018. Blades runs in a practically perfect manner, with no slowdown or bugs whatsoever. The graphics sector is incredible, with well-defined textures and a glance that does not leave you indifferent, especially in wooded areas. The situation in the dungeons is a little sadder, where bright colors give way to a rather monotonous gray scale: there is little to do, they are the classic underground structures typical of the last titles in the series. I didn't notice any overheating but clearly the battery suffers the same: the game weighs on the hardware of the device and in an hour it sucked me away the 30% of the battery, a little less on the iPad. Expect more or less four hours of continuous play on a new device and with the battery still at 100%, without any wear and no energy savings, activating it the times get slightly longer. In the case of Apple devices, minimum iOS 11.0 is required. Below is the list of officially supported devices:

Clearly we still talk about a title in the early access phase, with time the support will probably be extended to new devices.

Blades is not an open-world as I hoped, but rather it consists of a series of missions alternated with a management phase concerning a fantasy town. After the brief introduction we find ourselves in a forest, with a city destroyed in the distance. Reaching it we discover what happened: some of the queen's soldiers destroyed the statue of the founder and lightning suddenly fell. Setting fire to iron, our task is to reconstruct all the buildings piece by piece. With the materials and the gold that we find in the missions we can therefore start the construction of forges, houses and so on, together with decorations that increase the level of the city, to which increase is given the possibility of building larger buildings and beautiful. Each construction takes some time to complete, which can be reset by spending gem, consider that you can buy with real money or that it is given from time to time by enemies.

Le missions they must be selected from the appropriate menu and are rather linear and similar to each other. We must make our way among the enemies by finding the objects indicated, or simply by eliminating the number of opponents reported. The movement is managed both by touch, which allows you to reach the selected area, than from the digital stick, thus allowing free movement. The feeling is actually that of an Elder Scrolls in all respects. The fights are in real time and very simple to manage. Pressing the screen, a circular indicator appears that fills up and if you remove your finger at the right time, you make a critical attack: a basic mechanic that works rather well, especially thanks to the use of ability and magic, which consume stamina and magicka respectively. These upgrades must be acquired through a skill tree, which is also basic but functional.

During our pilgrimages made to complete the various missions it is possible to find the caskets, the element that made me turn up my nose. From the outset that, to me, free-to-play have never gone to genius and I always prefer to spend money immediately to buy a game rather than find myself forced to do so after hours of play. It has always given me the impression of a good and good joke, especially in multiplayer titles, but in this case we are faced with a game - for the moment - single player. Inside the trunks, divided by rarity, there are materials or pieces of equipment and their opening is timed, based on rarity. Do you want to open them immediately? Spend gems. Have you run out of space to store them? Spend gems. At the moment I haven't found a too invasive mechanic and I have already expanded twice the space available in order to be more comfortable, it remains to be seen how it will evolve during the advanced stages of the game.

In summary, I must say that I am quite satisfied with the product packaged by Bethesda. I had never imagined an Elder Scrolls to hold in the palm of my hand nor had I ever wanted it but now that I have it I am sure it will not be uninstalled soon, indeed! The daily missions always allow you to have something to do and theAbyss, a sort of infinite dungeon whose drops improve from floor to floor, guarantees excellent longevity. I sincerely hope that Bethesda knows how to exploit it and expand it properly, given that there is room for improvement. A cooperative mode would also not hurt, perhaps with larger and more complex dungeons almost like a sort of raid.

Andrea Schietroma - January 17 2022
Pandemic Digital Board Game, the videogame version of the board game of the same name, has disappeared from the digital stores without warning and above all without any official reason. As...
News

Sony, some PS3 titles have appeared on the PlayStation 5 store, ...

Di Sarno Raffaele - January 17 2022
In the past few hours, some users via Twitter have reported something really strange sifting through the digital store of PlayStation 5. It seems in fact that ...