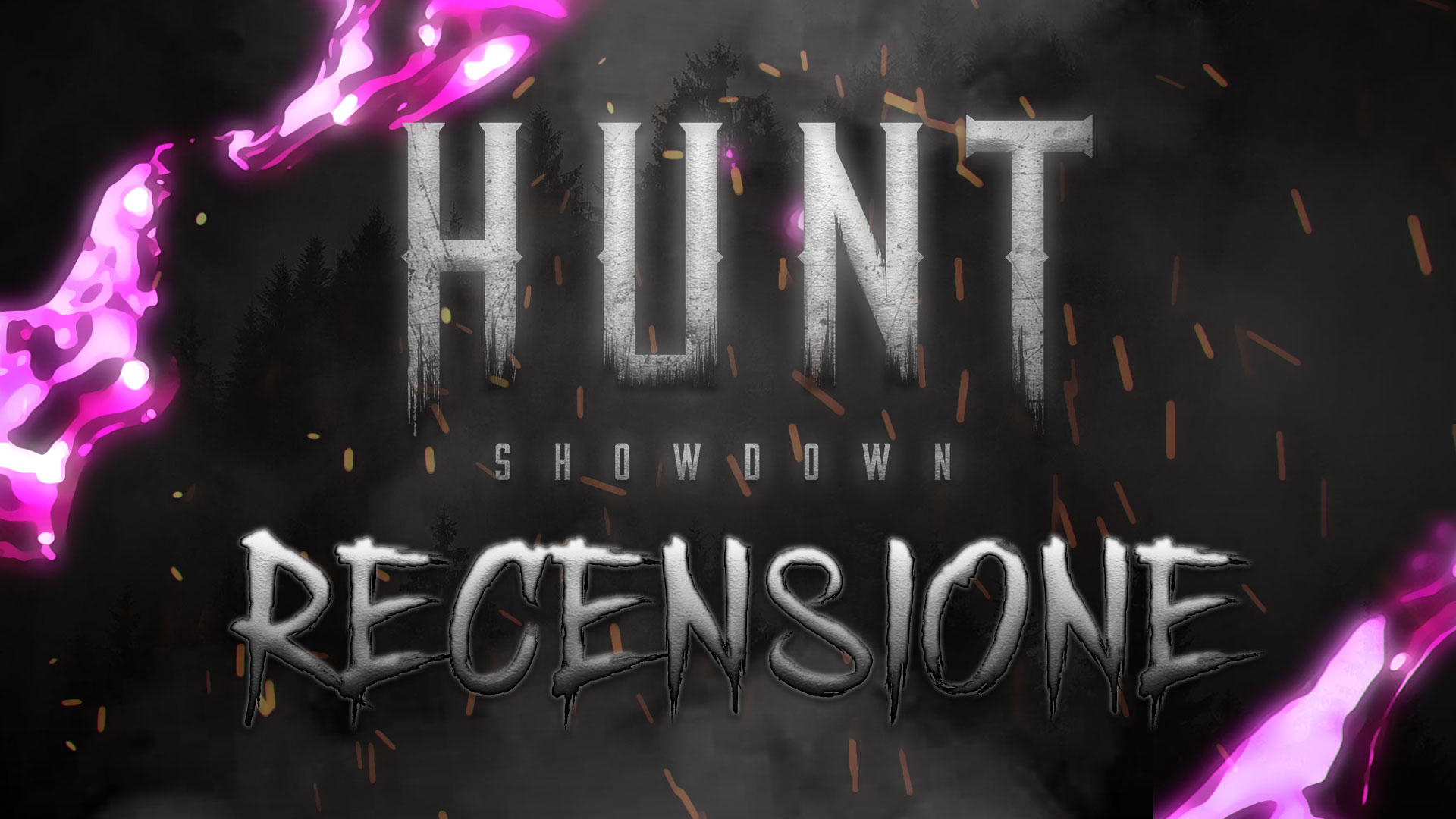 Crytek it is a company that has had rather high ups and downs. It is known in the world for two reasons: Crysis e CryENGINE, and many often forget that it is thanks to her if today we can also play the series of Far Cry. However, Crytek has always been more committed to developing state-of-the-art graphics engines, whose games are also the test benches for our poor video cards. On the other hand, every time you buy a new GPU the first question, often addressed in a playful way, is always "but does Crysis 3 run at its best?". After a rather critical period in the 2016, the year in which the company underwent a major restructuring and closed four studies, Crytek has committed itself to a few projects at a time. After a couple of attempts in the VR world with The Climb and Robinson: The Journey is committed, and is still engaged, in the development of this particular game, Hunt: Showdown. 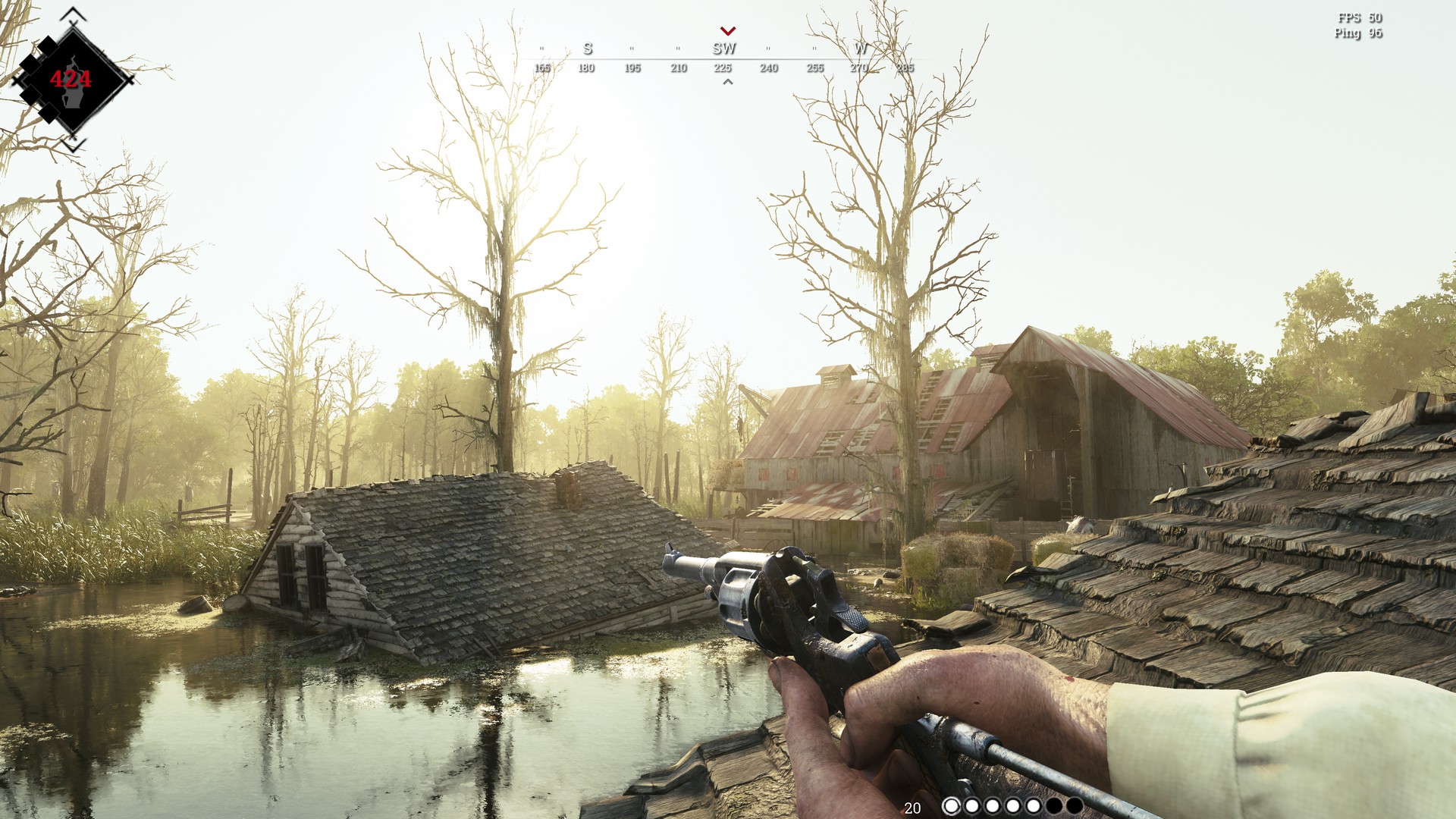 Published in February on Steam in shape Early Access, the game has been immediately successful both by the public and the critics. The title is a hybrid PvPvE in which the main objective is to investigate the presence of a monster (at the moment there are only two, a spider and a monstrous butcher) within a large map. Our hunter, duly recruited through virtual money, must discover the clues that, once analyzed, eliminate a portion of the map in which the monster is not present. The system of tracking clues is very simple: by pressing a key you enter a sort of investigative mode through which we can see some blue fireflies that mark the point to be reached. Of course it will not be a health walk. Scattered in the map are many zombies or enemies much more powerful, which require a large amount of bullets to fall to the ground. Besides them we must also pay attention to the other players. In fact, once one of the players (or a team, in case you play coop) finds the monster is indicated to the other players who must commit to reach it, kill its members and redeem the monster's size in order to win the game. 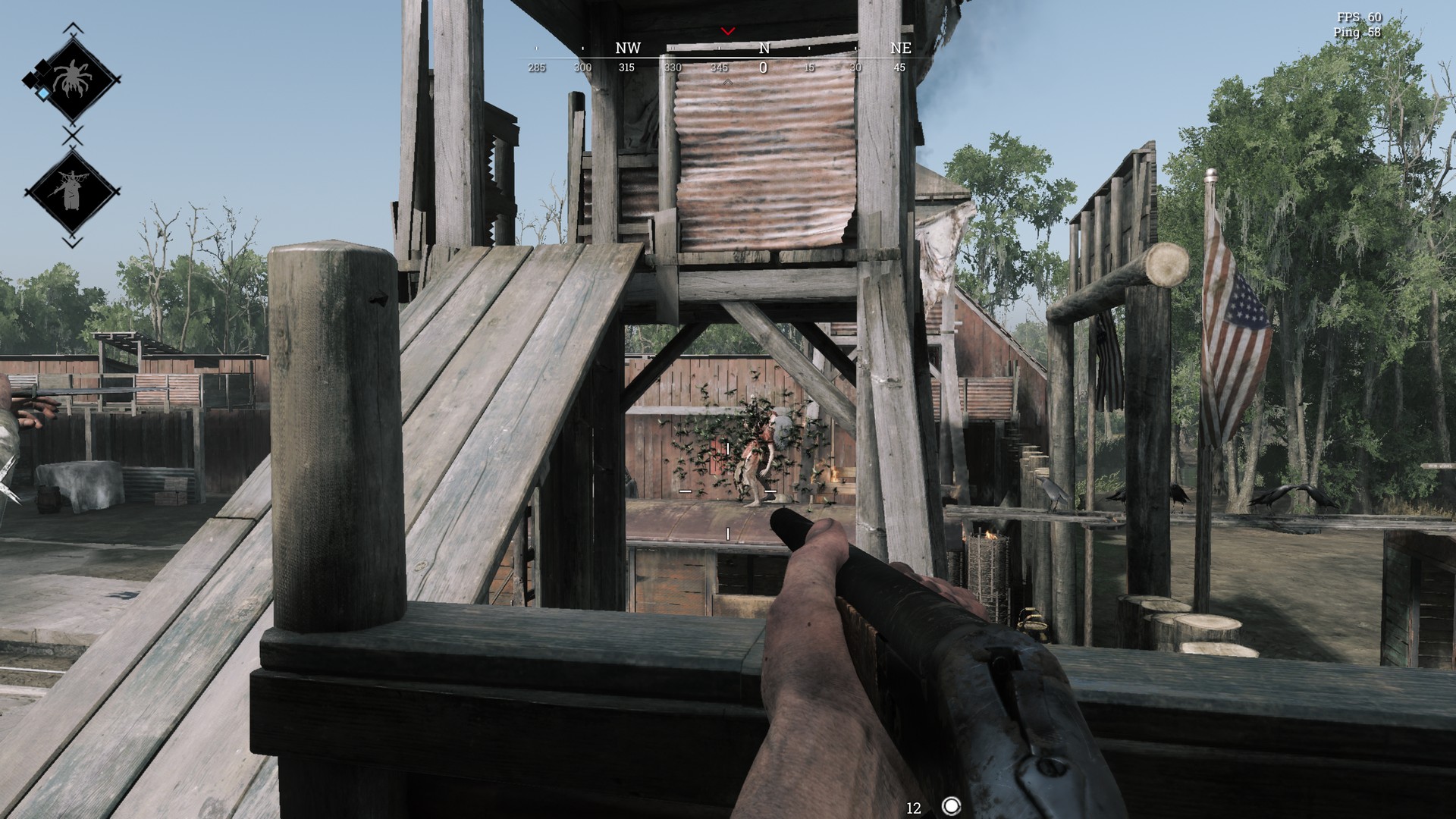 As a result, the anxiety is almost constant during the game, continually gripped by the fear of finding yourself in front of a zombie that throws us against a cloud of poisonous insects, the strange fish that once set foot in the water they fall on us tearing into it in no time or, worse, another player who, thanks to the power of the lag, is almost invincible. Furthermore, a few days ago have been published new map and a new game mode. The latter is quite interesting as it involves ten players, without the possibility of cooperating, within the game map. Each of them must find four special clues to win the game and get special prizes. Unfortunately this mode is limited time and soon it will be removed, probably while you are reading these lines it has already become unavailable. 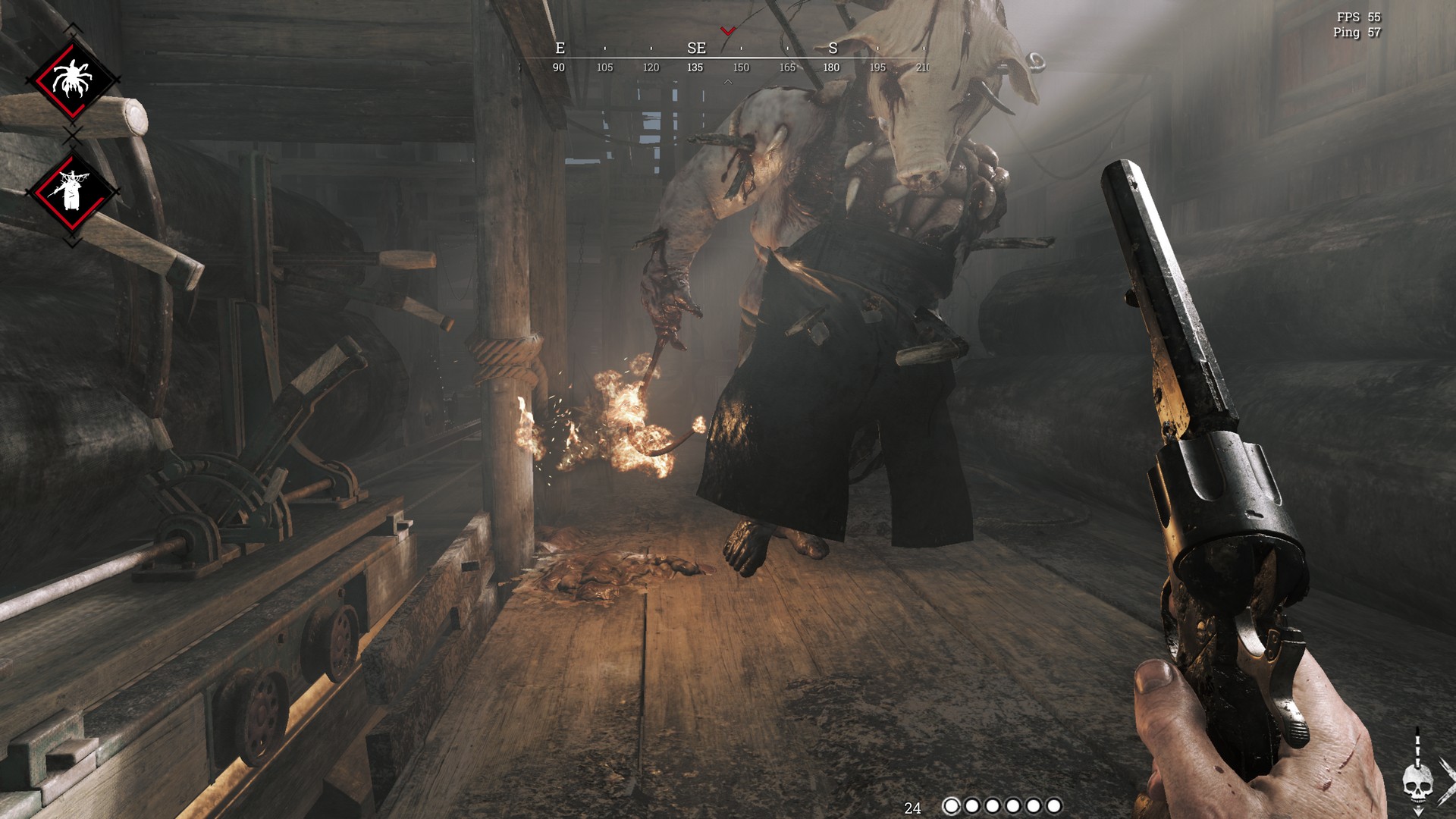 Before starting the game we must prepare ourselves. Through the money available at the beginning of the game and the one accumulated during the games we have the opportunity to buy new hunters, weapons, throwing objects, recovery and much more. Once you have reached the 16 level, the real fun begins as the game is finally unlocked death becomes permanent. Your hunter, whose equipment has been painstakingly bought level by level, if he dies, will not be able to come back to life and you will lose all that he wore. This element greatly increases the depth of the game as well as the fear you experience when you suffer even a single hit. Consequently, the difficulty curve rears up and the attention required increases more and more and it is not difficult to be surrounded by enemies without any possibility of escape. Even if you can get better weapons by increasing the level, we still talk about an extremely slow and heavy gunplay that rewards the tactics of the Rambo. Well-considered shots from a distance or, even better, silent stabs will be the elements that will lead you to victory or, at least, to the clash with the boss on duty. If on the card the game looks interesting, its state of early access unfortunately shines through every pore. 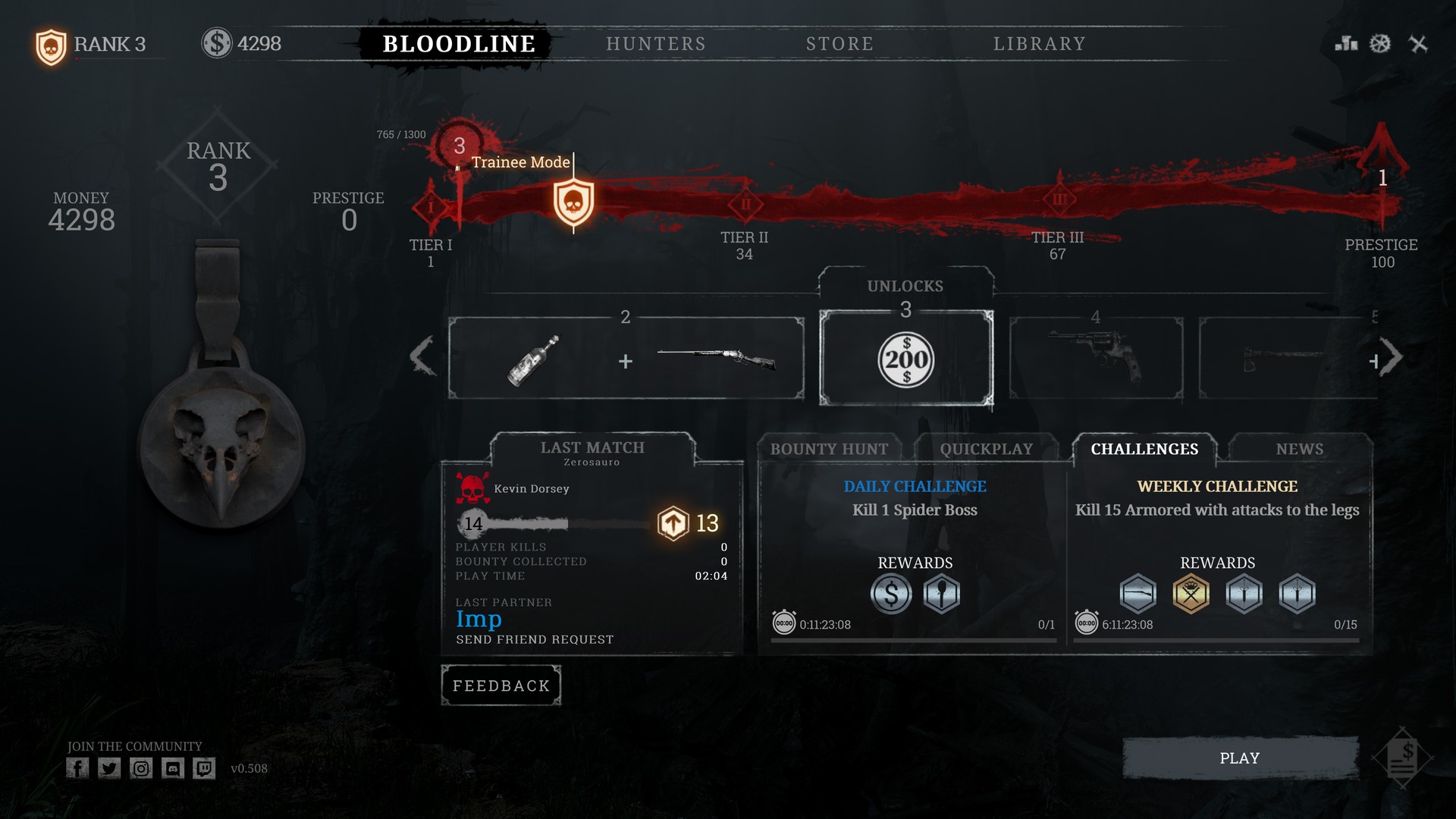 The matchmaking at the beginning of the game are extremely long and, in my case, the errors found were not rare after even five minutes of waiting, totally frustrated. One evening I tried for over two hours to play and I found myself doing just three games, so much so that I also had the doubt that there were no people connected. Checking on Steam Charts note that the number of players is still low but not so much that matchmaking is impossible. Also, during my tests, I had the chance to change video card. During my tests with the 1070 I had to keep the game at medium settings and at 1080p and in any case the 60fps were almost never reached. After a few days I bought an 2080 and I tried to play 4K with high settings, option immediately discarded as I went on the 25 fps. Playing a bit 'with the settings and lowering the resolution rightly the situation changes but we are still in front of a product still raw and not optimized, extremely heavy and that has yet to be refined much. From the point of view of the gameplay I did not find big flaws apart from some imbalance in the matchmaking, which often put me against high-level people armed with sniper who me oneshottava without I had the opportunity to do anything. Of course, it is not a minor problem but I hope that they correct this too during development. Surely we will discuss it more in depth, following further patches and updates. 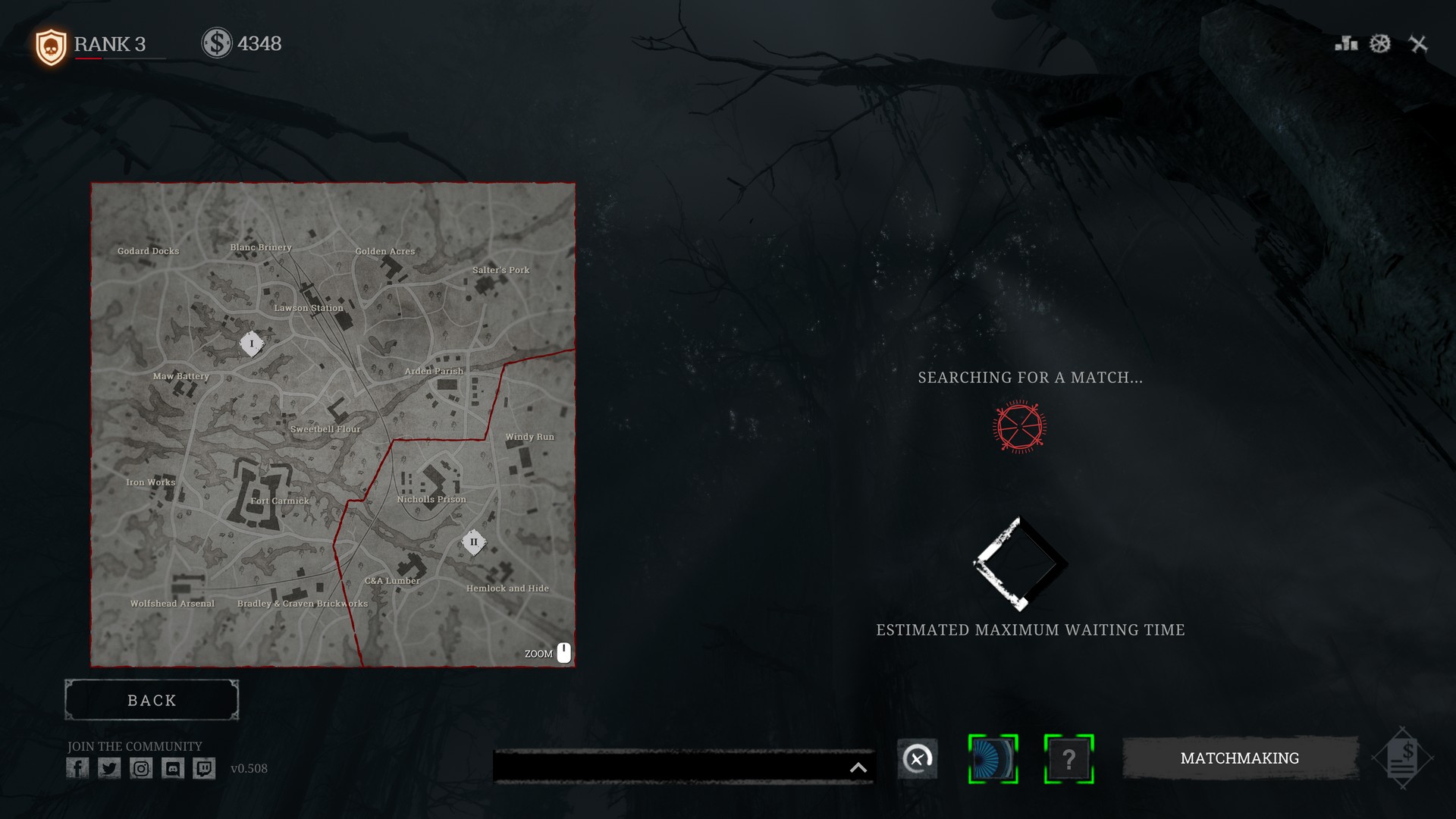 Note - The game was performed on the following configuration: