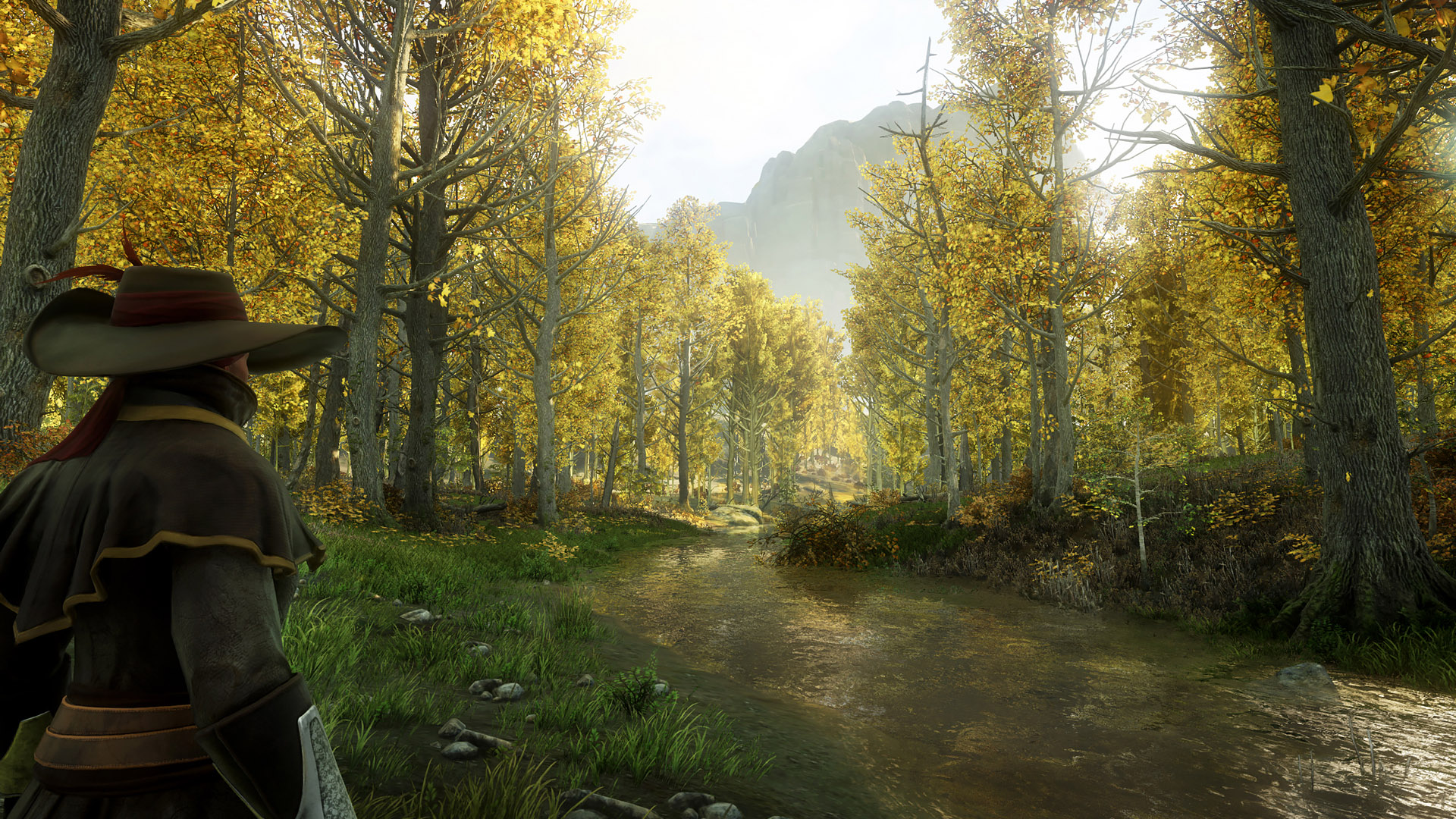 Amazon Game Studios has therefore made its debut at gamescom this year bringing two titles: New World, already known, and The Grand Tour Game, officially announced to the public during the days of the German fair, the official game of the homonymous TV show not by chance produced by Amazon itself.

New World is an MMO sandbox for PC set, as the name suggests, in the seventeenth century and inherent in the era of exploration and colonization of new territories, looking for resources and fortune. The continent action theater is an imaginary territory, appropriately built to provide players with the widest variety of possible scenarios: the game map appears from this very huge stage of development. The version brought to gamescom is considered a pre-alpha, the same on which the team is actually working, but is already mature with regard to the graphic and physical engine, an aspect that bodes well for the months to come. As usual for a sandbox, the key element of gameplay is the collection of resources and the construction of weapons, clothing, tools and so on. Although the focus of the game revolves around combat and war, the skills available also span classes of "public utility" as a cook, architect and many others. In fact, the title pushes players to reunite in guilds, and compete for territorial supremacy over a larger area. Having a good assortment of roles is desirable: a high-level blacksmith, for example, will allow us to have more efficient weapons in a short time, and therefore to be able to respond promptly to the war requirements. Even those who do not particularly like action in the first line can find incentives to spend many hours on the game. 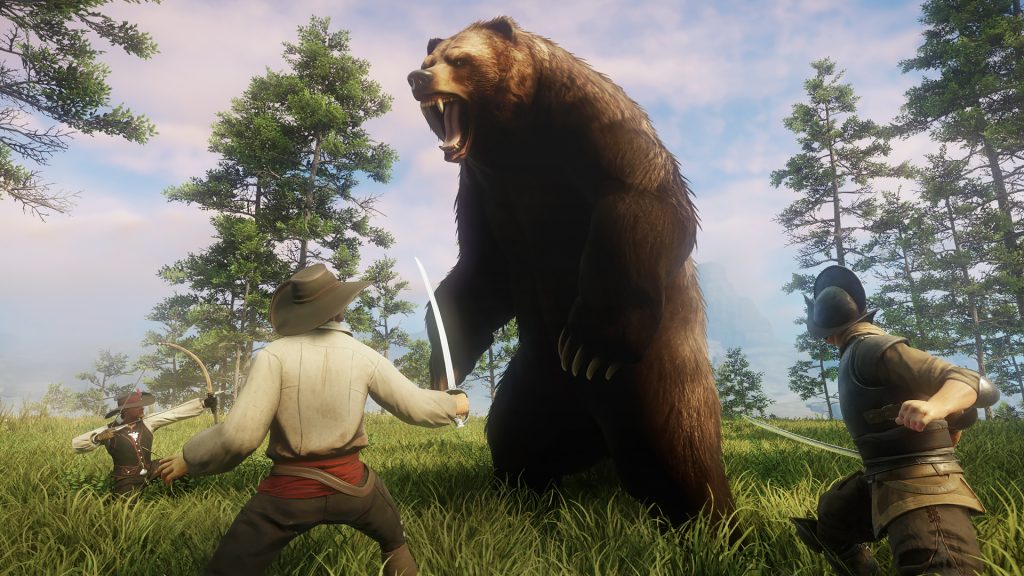 Patrick Gilmore, Studio Head of the game and former producer of many 16-bit Disney video games like Aladdin (on Mega Drive), Goof Troop, Mickey Mania and more recently responsible for the reboots of Killer Instinct and Strider, guided us during the demo, proposing a series of activities that gave a good idea of ​​the freedom of action of the title. After building a dagger using rocks and firewood, we shot down and skinned some wolves to improve our clothing. Already at this stage we witnessed the demonstration of the unpredictability of the game: one of my adventure companions came across a wild turkey and took advantage of it to get good meat ... pity that the clash attracted several wolves and put in serious trouble its survival! After reaching a fort, appropriately loaded with weapons and ammunition, we prepared to assault an enemy camp. Who with bow and arrows, who with sword and who with rifle, we found ourselves around the enemy, and after having broken through its barricade, we have exterminated its occupants and been able to expand our territory. The combat is quite simple at this stage (it sticks with the left mouse button and you defend with the right), but the game aims to deepen a lot these mechanics, with the addition of magical and supernatural powers, not yet present in the demo. 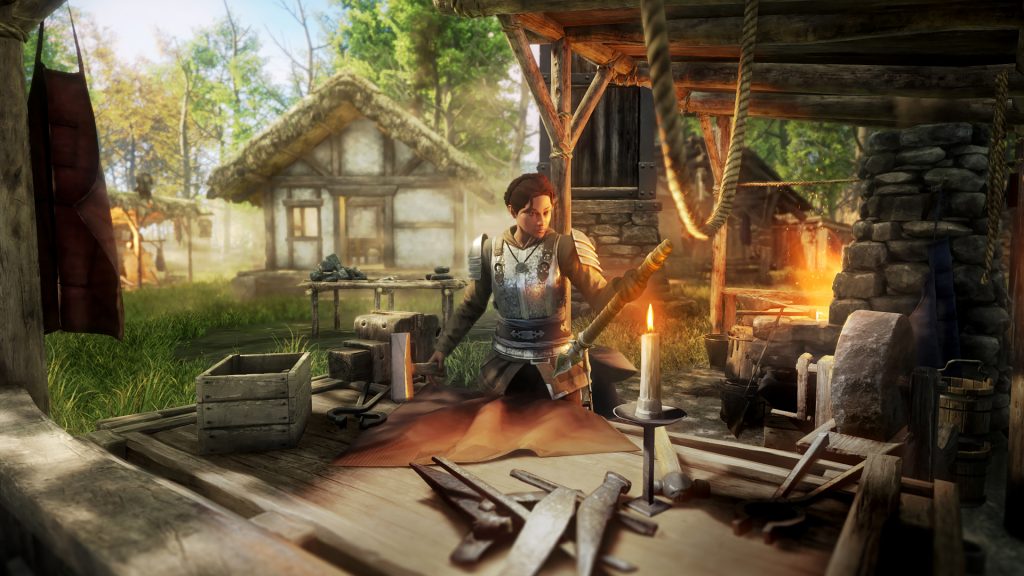 There are no precise dates for the exit, but there is still a lot to do what has been seen and proven is convincing. To be calibrated again the number of players simultaneously present in the continent: the first test will see the server begin with 500 players to progressively increase up to 10000. It is expected that as players grow, the balance will be distorted, so we can expect very intense open beta sessions in the future and a special attention to player feedback. 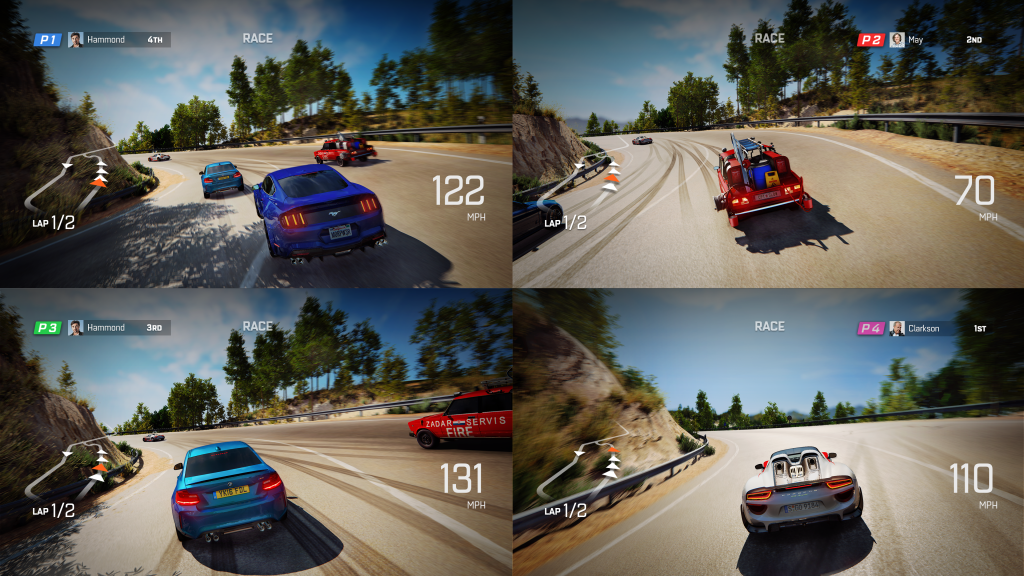 Also The Grand Tour Game is at an early stage of development, but appears decidedly more immature. If it is true that the game wants to be a complement to the TV show, with a release of episodic content that goes hand in hand with the episodes, it is equally true that the game component must be valid. As proven so far it is a rather woody arcade racing in the controls. A single episode presents different missions, which act as a bridge between the transmission footage, in a sort of interactive narrative. Using the same cars of the movies we will have to complete the laps of the track within a maximum time, avoid going off the track or other activities that are decidedly uninspired. There is also a local multiplayer mode in splitscreen that adds the presence of some weapons to collect in order to hinder opponents. In the demo, there were only two weapons, a turbo and the sending of annoying SMS that cover the screen of the opponents, with the voices of the presenters of the show to act as a side dish in this bland disturbing action. For now, far too little to be an interesting mode, but there is still time to refine the gameplay and add some surprises. The game will see its debut along with the third season of the TV show, whose date is not yet known, and It will be available for PS4 and XBox One.

Andrea Schietroma - June 14 2021
After about a year of exclusivity on Google Stadia, Orcs Must Die! 3 is preparing to land on all other platforms starting ...
News

Andrea Schietroma - June 13 2021
During the Xbox & Bethesda E3 conference it was announced that Yakuza Like a Dragon has officially joined the catalog ...