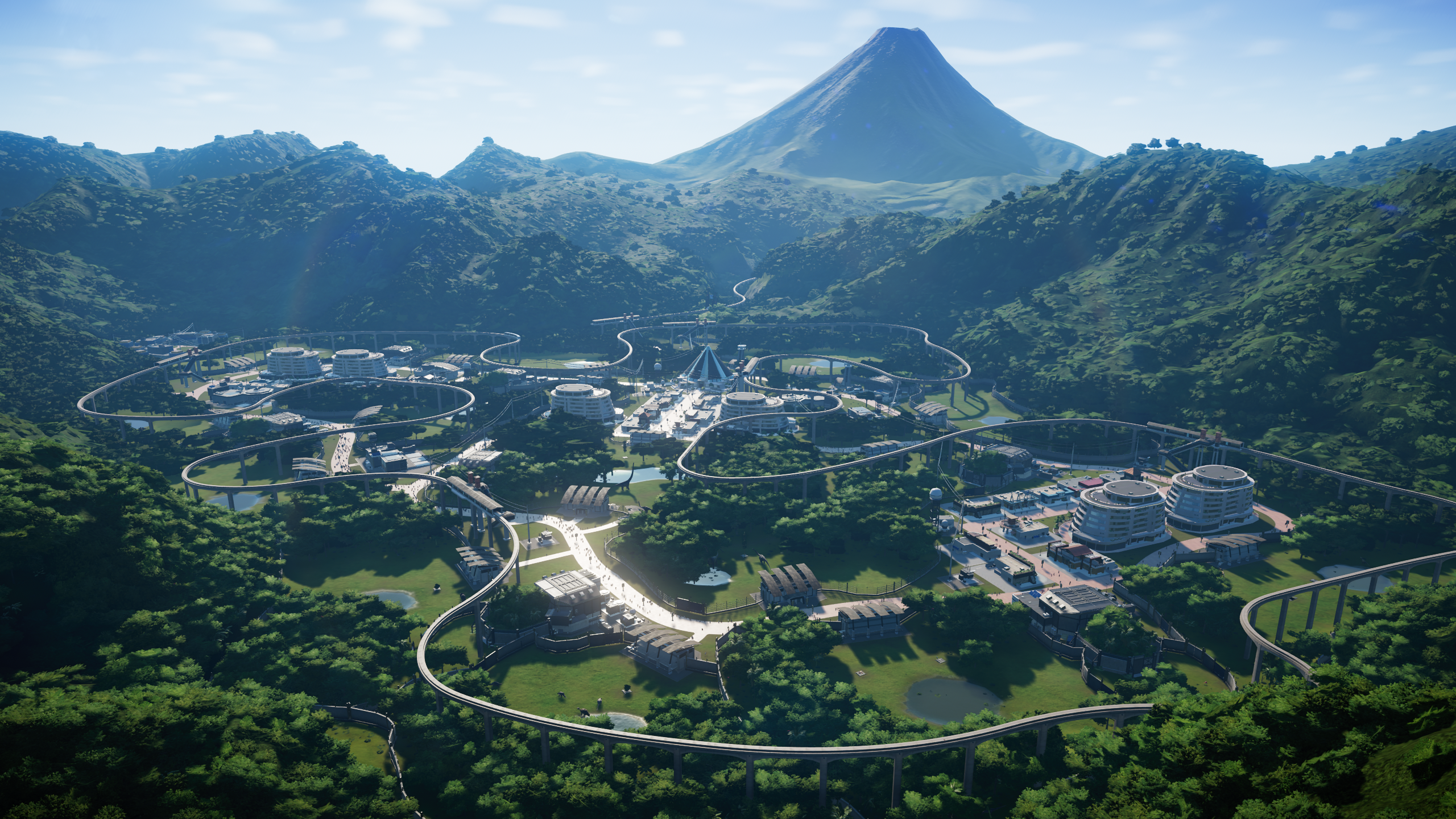 Jurassic World Evolution it arrived a bit 'surprise, after a relatively short development so that coincidesse with the landing of the new film of the Jurassic franchise in US cinemas. Nonetheless, it was waited tremulously da a motivated niche of fans (including myself). Not just because Frontier developers have a notable reputation (from Planet Coaster ad Elite Dangerous,) but because within the park sim prehistoric, the offer remains very sparse.
Suffice it to say that Jurassic Park: Operation Genesis remained the peak of the genre in question from 2003 to today, while the brave even ventured into the world of prehistoric mods for Zoo Tycoon 2. The most promising indie title in development, Prehistoric Kingdom, still has a long journey ahead of him.

Jurassic World Evolution so he faced a debut full of expectations. Did you meet or disregard them?

Uhh, Ahh, È So That It Begins (Also In Jurassic World Evolution)

In Jurassic World Evolution we are put in charge of an archipelago composed of five islands: Matanceros, Muerta, Tacano, Pena and Sorna (the latter has served as the setting for the second and third film of the cinematographic series). The islands come unlock one at a time, increasing the popularity of the park. Completing missions and contracts assigned by divisions (science, entertainment and security) will give access to other excavation sites to find new fossils, new buildings and scientific research options and so on.
Once you reach the popularity you need on Matanceros, Isla Nublar will also be unlocked, Seat of the Jurassic Park original, in which we can operate in sandbox mode, with infinite money. However, the new buildings and dinosaurs will still be manually unlocked on the other five islands, making it mandatory to complete the campaign before moving to Nublar.

As we take the first steps in the management of our new park, we come into contact with what is undoubtedly the strong point of the game: the dinosaurs look magnificent, and are even more beautiful once dropped into the spectacular landscapes of the islands. The animals that swarm our park basically follow the canon of the movies, which makes them very incorrect from a scientific point of view, but lat realization it is so beautiful that even I have put aside my most nerd instincts to enjoy them and that's it. The five parks are open to tourists at different times of the day (with the sun, at sunset, at night) which makes the individual islands even more unique in their appearance, as well as offering a nice touch of continuity between the six parks that we can build.

Where is La Capra?

Gradually the honeymoon with the dinosaurs is exhausted, however, they begin to emerge the sore notes of the game. The mechanisms with which it interacts with the control room, the research laboratories and the extraction of fossils recall those of a mobile game: click and hold, click and wait, with the risk of finding oneself with little to do meantime. The building areas of the islands are quite small and the customization and embellishment options are limited, an experience quite different from the creative outlets allowed by Planet Coaster, which is always signed by Frontier.

Tourists are basically a background element. They do not have an AI, they do not have individual preferences and it is not possible to interact directly - on the other hand, to see our carnivores to spoil the tourists it is particularly funny, and has the only negative consequence the opening of a new expense item to cover legal costs. Evidently, after five films and several video games full of catastrophes, public opinion has become accustomed to the idea that by visiting a Jurassic Park you can be eaten.

The dinosaurs in turn are, however, quite superficial in their AI. They do not have pack dynamics, they do not feed from their feeders (despite the abundance of vegetation on the islands), they do not sleep and do not have a hunting instinct - carnivores will kill any herbivore or tourist they will come in contact with, regardless of their hunger, and they will ignore the victims just killed to look for others. Considering that all the elements mentioned in this paragraph were part of the Dinosaur AI of Operation Genesis fifteen years ago, it is understandable how the thing can provoke irritation - even more so because it makes it impossible lto creating a Site B on the model of Isla Sorna in films, in which to leave the animals free to interact with each other.

Continuing to play, I changed my mind about most of the negative elements just listed: many of these hide an unexpected depth or at least the promise to be rectified in the future. Frontier has an excellent reputation for the constant support provided to their titles after the launch, and based on recent statements we can expect the same to happen for Jurassic World Evolution. The first free DLC will be available as of June 22 you are new dinosaurs seen in the last film, which will be added to the thirty-eight already present (forty-two, if you have the deluxe edition).

That said, there is one feature that I consider really ridiculous and that it breaks the dive a lot for me, and it is the method of progression for the divisions.
The three divisions compete to get the attention of the player, and as said complete the tasks assigned by the respective divisions will allow to unlock new buildings, dinosaurs and research. But a division that feels ignored will proceed to acts of sabotage against the player and the park. 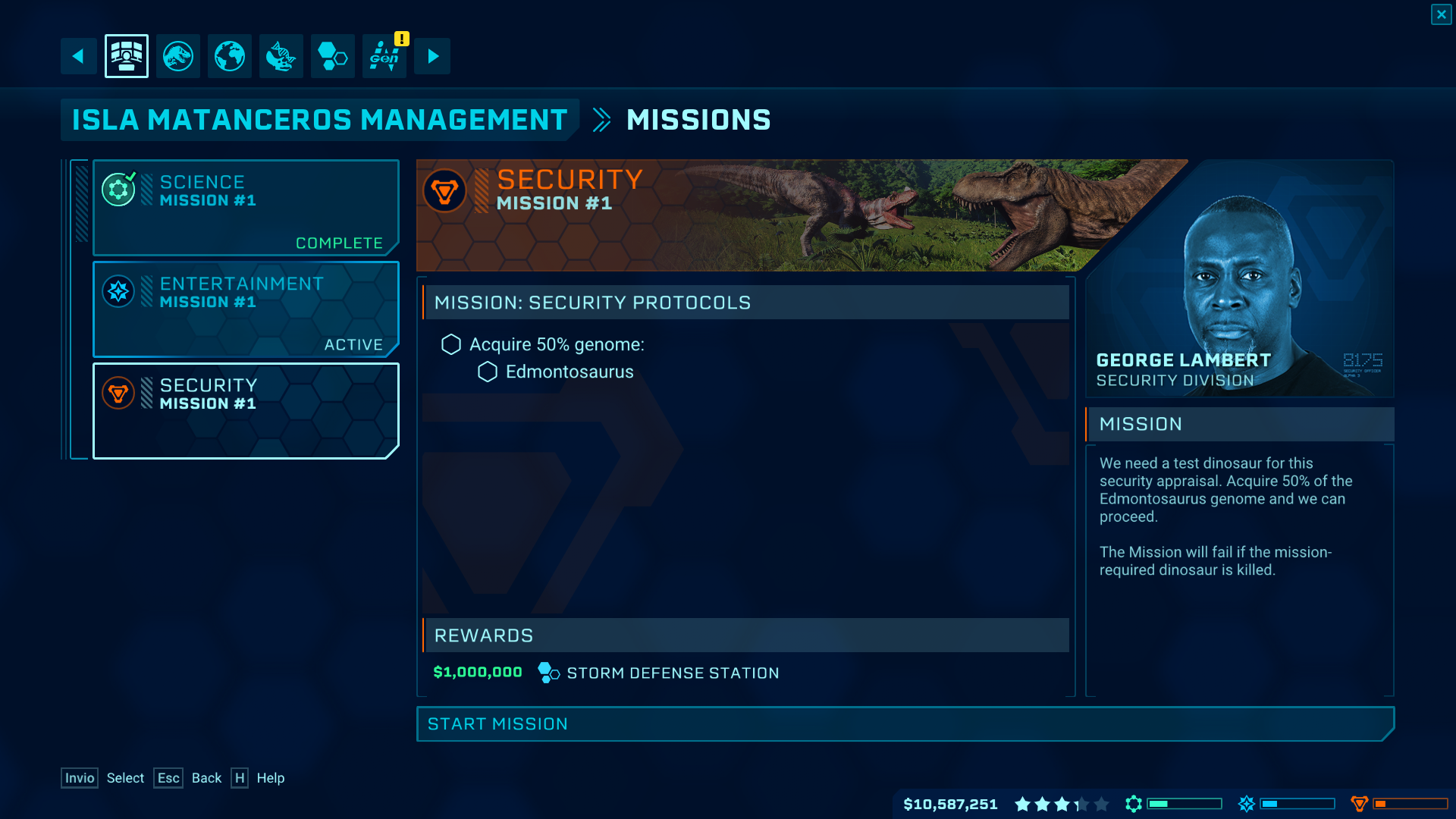 Now, on paper we can understand where he wanted to go to save Frontier. All in all, the sabotage conducted by a dissatisfied employee is the central plot point of the very first film (and the book that inspired it). These are the actions of Dennis Nedry that start the spiral of chaos and death that will lead to fall of the old park.
But in Jurassic World Evolution this simply does not work. Imagine completing missions only for entertainment and security divisions; how this should convince park scientists to disconnect electricity from carnivore enclosures, allowing them to break free and to spoil dozens of tourists? This is not office politics, it's mass murder! And I should keep employees and colleagues like that?
Adding to the cumbersome dynamics of progression, this choice helps make contracts look and feel really uninspiring of the gameplay.

After careful consideration I decided to endorse your park

As mentioned before, however, Jurassic World Evolution it's more than a graphically beautiful game with superficial and unsatisfactory mechanics: slowly I became familiar with the mechanics of the game and I unlocked new buildings, the building spaces on the islands started not to seem so tight. Indeed, with the right combination of creativity and ingenuity you can create beautiful parks and also very different from each other, and you can host a surprisingly large number of dinosaurs.

For the improvement of the interface a bit 'cumbersome and the AI ​​of the dinosaurs does not remain that wait for post-launch support of Frontier, for whom it is legitimate to be confident; but over time, play at J he started to like me more and more, not less. And undoubtedly, once Nublar is unlocked and the campaign is completed, the best thing to do is to demolish everything you've built on the five islands, and use your huge income and accumulated experience to build from scratch. the park of dreams.

Unlike Planet Coaster, Jurassic World Evolution it will hardly support mods through the Steam workshop: Universal is indeed very protective towards his intellectual property and his asset. Nevertheless, there is something to be optimistic about the future: the game is already an excellent starting point and with the right additions of content, and revision of some mechanics, it will finally mature its full potential.

But above all, Jurassic World Evolution is fun. After an initial not really encouraging parenthesis, the game was able to change my mind. To answer the question posed first - if it met my expectations as a fan of the genre and the theme - my answer is absolutely yes.