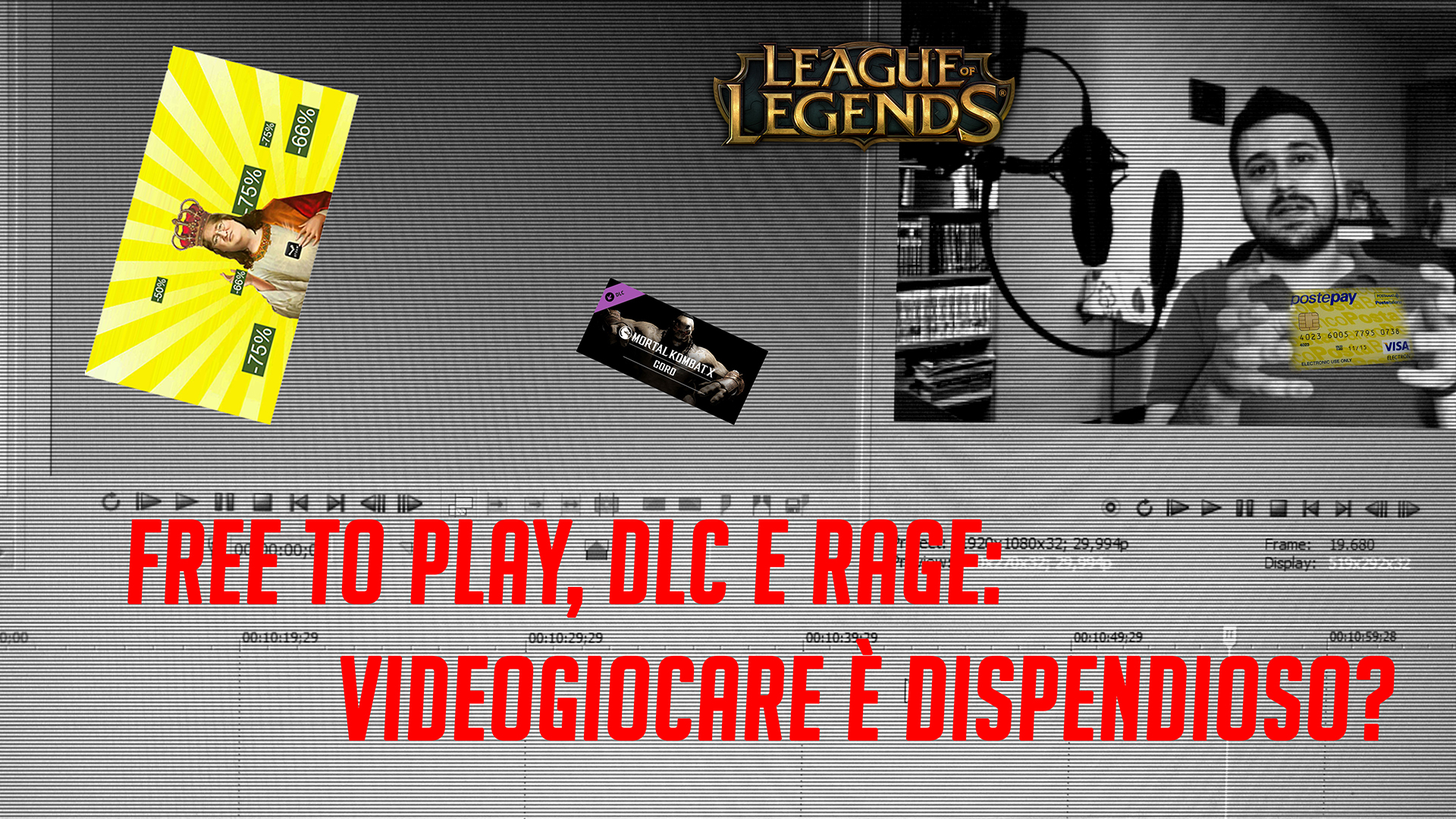 What we want to deal with today focuses mainly on how much it has become (or even the other way around, tell me) expensive videogiocare.

Expensive not only in monetary terms, but we still proceed with order.

The free to play, from here on f2p for convenience, is a relatively new type of business in videogames, although it has existed for several years, it has had its boom only after the advent of games like league of legends, Dota 2, Warframe and the more you put it.

With this model the developers they try to reach a bigger and bigger slice of the market, sometimes with much more than satisfying results, sometimes with results equal to that our distant task in the mathematics class in 1 higher, yes, just him.

But what depends on the success or failure of this formula? Basically from two distinct elements but so intersected to be, in the end, a unique thing (thanks to the mother you say).

The game itself, with all those technical and playful aspects as well gameplay, graphics, lore etc. Listen, listen,in game shop. The right recipe resides in that thin line between making a paid game and making it become a pay to win (p2w from now on).

As we all know, practically nobody does anything for glory, except Mother Teresa e Tony Stark, the developer must then work on how to profit from his child without going to damage it.

Damage a game in a few simple steps:

How to do so not to affect the technical aspect of a game? Offering aesthetic improvements, whether they are only obtainable by paying or through grindaggio extreme from Korean (grind - endlessly repeating a mission or killing a monster) depends only on the company's policy.

The f2p, therefore, could be the correct economic choice for those who always see the fateful little moth coming out of their wallets, provided it is a sustainable model.

Another plague that afflicts the gaming world today, the DLC, the instrument of torture comparable to the Virgin of Nuremberg preferred by large houses, EA more than all.

Flying over the general rise in prices, you want it to be because the projects are getting bigger, you want it to be particularly greedy of the upper floors, I personally think it is VERY questionable to buy a game at 69.98€ al day one and find myself after a month with an additional piece of history, or a car or simple costumes.

This commercial practice has discouraged, at least in my small group of friends, the purchase of any title that could have come to the "sfornamento" of dlc an industrial character as an act of arrogance on the part of the parent company.

The sad truth is that unfortunately we passed by one quality gaming to a quantity gaming, too many video games around, of all kinds, all the same, all united by the unstoppable need of income.

Not that before they worked for the glory, but having grown up the slice of the gambling population, if before it was aimed at making the buyer happy because good or bad gave you food and the reputation was very important today is not like that anymore, pardon the comparison between one Diablo III, a Path of Exile it's a Drakensang.

Reaching our homes has never been as simple as nowadays and for every one that we say there will be ten thousand other users who will say yes, and will also spend inside the shop.

We all started to please ourselves, who most who least, and I think it damages us directly.

Another focal point of my reflection goes to the phenomenon of Steam balances, manna from heaven for many who like me struggle to stay afloat month after month.

How many we find ourselves systematically to say: "acciderbolina that cool I'm playing" pity that costs so much, better to wait for it to go on sale.

This commercial tactic, in my opinion, damages both us consumers and producers for two simple reasons.

How do they damage us? Very simply the developer loses interest in producing quality games, sooner or later they will end up costing little, and it is better to sell so little by little, rather than slightly.

The other side of the coin is us, irresistible pranksters who can not resist that small logo that mentions -75% for example, and we end up buying every piece of garbage that you are aiming for, maybe without ever even starting it or actually finishing it.

All this is really very very sad, see these giant bookstores, produced by our desire to accumulate indiscriminately hiding behind the finger called "sooner or later I will play".

Relationships' in by AUS

A really huge cost that video games, mind you, not the developers, claim from us is ours time and our social relations, how much are you willing to invest in to enjoy yourself?

Not that the flame for example it never existed, as well as i troll, but the common trend is moving towards increasingly toxic communities, which is not is absolutely good.

I understand competitiveness, I understand the desire to win, but we can not ABSOLUTELY allow us similar behavior, objectively you would wish cancer to your childhood friend with whom you played soccer?

We have to keep civil behavior, we are PLAYING to have fun, it does not make sense.

Gaming is moving more and more to online but is an online one heartless of his appearance social which in principle was a reason for aggregation rather than frowns, I still remember with pleasure my guild up World of Warcraft, a great family, people of all ages, friendships left out of the game, always being there for each other, RAID from 25 to sweat together, premade battlegrounds.

Today the maximum aggregation we have is a 5 team on any one MOBA or at most from 10 on any one FPS.

We always remain on a lean cooperation, which does not aim to build anything, because the match is over again starts from scratch, but this is just the point of view of a poor mentecatto.

The nut is drawn

In conclusion I argue that the Gaming today as never before requires more resources, both economic and social, sometimes moving away from each other, and although losing 70 € for a game is bad, I am convinced that losing a friend for a game is excessive.

We just have to try to be careful in the choices, in the expenses and look for the quality, without fear of taking new paths, we do not have to be the best, we must not not play Quake III Arena because we will never be gods progamer, we have to play for the the best fun possible.

Console: Is it fair to pay for online services?