When I was in 2015 at Collision Conference of Las Vegas looking for new titles to be reviewed, even for mobile devices, Scavenger Duels I was particularly struck by the beauty of the hand-made design and the simplicity of understanding the game's objective. In short, the story is this.

You are an adventurer who reaches an unspecified place (Planet?) In which in a futuristic steampunk setting and in the middle of the desert, (Borderlands style), you will clash with certain opponents in both single player and multiplayer modes. You will go ahead in the progression of the character by unlocking new armaments, upgrades and avatars. Combat is based on a turn-based system, which initially may seem particularly easy, but in reality it is not. You will have basically some types of cards to play against your opponent and everything must be coordinated in bringing his life to zero. You will also have to manage, in addition to the objects in your inventory, two more parameters on your character, life and energy. 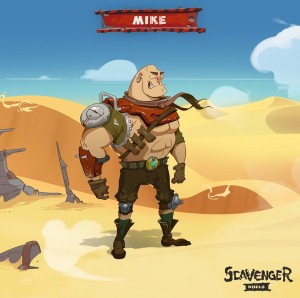 Your cards / objects in the backpack are divided into 3 macrogroups: cards that restore energy, cards that defend you from attacks (like the shield), cards that allow you to attack the opponent by spending part of the available energy. Initially you will have one for each type, but with the passing of the enemies your Scrap (screws) will increase and you can buy new weapons to use, which will increase more and more your game strategy. What is very interesting is the fact that you can challenge other people online, which for obvious reasons, will give you much more trouble than AI and therefore will increase the degree of challenge you will encounter. The game has just landed on both iOS and Android, it's free and is totally free of advertising, at least for the moment. Obviously being a free to play something will have to earn money and this happens through the simple sale of Scrap packages, but basically to unlock all the contents you are not obliged to buy them, you just play and accumulate, then another point in favor of this team development Tryad Games.

My opinion is that Scavenger Duels have a chance if you deserve it, maybe you can try it while waiting for a bus or have a spare time during your daily activities, and do not tell me there's no suggestion at Borderlands!

Bethesda denounces Warner Bros. because of the game on Westworld